What Girls Do When They're Left Alone: 150 Years Of CARMILLA

Part one of our four-part CARMILLA celebration. 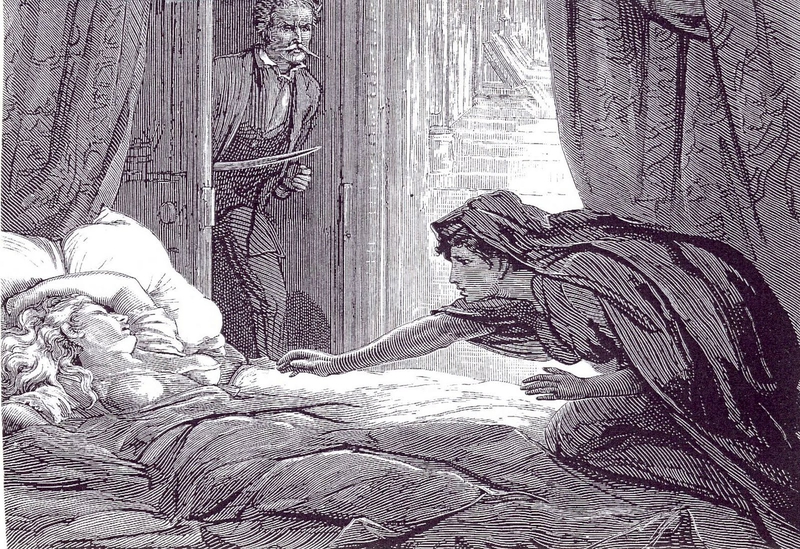 Is it consumption or CARMILLA?

"Love will have its sacrifices. No sacrifice without blood."

Published 150 years ago this year, Sheridan Le Fanu's 1872 novella Carmilla is a quick and atmospheric read, one that can be finished in one (preferably rainy) afternoon. Told in the first person by teenage noblewoman Laura, the story takes place in the primeval fairytale forests of Styria, in southeastern Austria. Laura and her father are English, but have taken up residence in a "picturesque and solitary" castle long since abandoned by the family that built it. This, she assures readers in the opening paragraphs, allows them to live for far less than it would cost to maintain such a household in England.

But while Laura is well fed and comfortable, she's also terribly lonely. That abruptly changes one afternoon when a carriage accident outside the castle changes Laura's life forever. The vehicle is carrying two riders: An imposing matron of regal bearing, and a willowy creature with sleepy eyes who looks like a teenage girl. The woman tells Laura's father that the girl is injured, but she cannot postpone her journey any longer. She's on urgent aristocratic business, the type that might bring consequences if the king finds out that Laura's father delayed it. Can the girl stay at the castle while she finishes her errand?

Laura, eager for someone her own age to talk to, begs her father to let the girl stay. Despite himself, he agrees; she's just the companion Laura has been asking for, even if the circumstances of their meeting are a little odd. What could it hurt, having her around? Such a fragile thing, with a strange, beautiful name. Carmilla.

Laura and Carmilla become inseparable almost immediately, at which point Le Fanu's already dreamy book takes on the hazy, undulating quality of light glancing off of a mountain lake on a hot afternoon. The rest of the story is driven by dreams, hallucinations, and subtle, shifting emotions as Laura loses herself in Carmilla's hypnotic presence. Laura is transfixed by Carmilla's gaze, which awakens a faint but irresistible desire she describes as "that pleasant, peculiar cold thrill which we feel in bathing, when we move against the current of a river." She's getting weaker, and she doesn't know why. "Carmilla became more devoted to me than ever, and her strange paroxysms of languid adoration more frequent," Laura reports. "She used to gloat on me with increasing ardor the more my strength and spirits waned."

Published 25 years before Dracula, Carmilla is a foundational text of vampire literature, establishing the blueprint Bram Stoker would later use to build his romantic take on medieval tales of the grotesque undead. Subsequent adaptations have blurred the lines between these two works, adding and removing elements — some of which pre-date Le Fanu and Stoker, and some of which came in their wake — to cobble together the "rules" of vampirism as they're commonly understood today. It's not stated explicitly in Le Fanu's book that sunshine could kill Carmilla; Laura simply notes that her friend sleeps for most of the day and wanders the castle grounds at night. Garlic and mirrors are similarly absent in Le Fanu's text. But Carmilla definitively states two of the fundamental "rules": One, that vampires have an aversion to religious symbols, and two, that either a stake through the heart or decapitation is necessary to kill the fiend for good.

Reading both books, one can compile a checklist of similarities, deviations, and small tweaks: For example, Stoker took two characters from Le Fanu's book, an English doctor with an interest in the occult and an Austrian vampire hunter, and combined them to create Dr. Abraham Van Helsing. But the most important difference is that Stoker's vampire is male, which makes Dracula's sexuality comprehensible, if still threatening, to a heteronormative society. Carmilla, on the other hand, is dangerously, incomprehensibly queer.

For that matter, all Gothic horror is queer in that it is about the transgression of social mores by an "unnatural" being whose differences make them fascinating and frightening. Carmilla fascinates everyone she meets. She's both seductive and scary — or, more precisely, she's scary because she's seductive. She embodies a morally upright Christian patriarch's worst fear about what girls will get up to if left unsupervised, initiating them into her "inverted" ways and turning them against their fathers. She exposes the inadequacy of male power structures to understand the primal, untamable feminine.

A vampire is not bound by gender roles. She can remake herself as many times, and in as many ways as she likes. Nor is she bound by biology: Free from primitive cycles of reproduction and death, she can form families and create children in whatever manner pleases her. As Annie Rose Malamet writes of her fascination with lesbian vampires for Cultured, "the idea of immortality itself is inherently queer, in that it challenges the western hetero-patriarchal concepts of life and death."

Unlike her more theatrical sister Elizabeth Bathory, Carmilla is a subtle predator. She slips through the cracks of patriarchal "protection" and is all the more insidious for it. Playing on racially loaded concepts of white female innocence, chivalry demands that the noblemen who encounter a seemingly helpless girl like Carmilla welcome her into their homes. And sexism ensures that they will not see her as a threat, even as she sucks the life out of their daughters.

When Le Fanu's novella was originally published, "romantic friendships" among middle- and upper-class white women were widely tolerated in America, partly because the men in charge could not even begin to imagine what two women having sex with each other might look like. And in the 1989 TV movie version of Carmilla —which moves the story to the pre-Civil War American south— Meg Tilly's Carmilla taunts the doctors gathered around Laura's sickbed, showing them the matching puncture wounds on her wrist. Their picnic the previous day "must have drawn spiders," she says with a smirk. And so Carmilla floats from manor to manor, girl to girl, preying on the idle daughters of the genteel classes with impunity.

At the end of Roger Vadim's sumptuous, dreamlike 1960 film Blood and Roses, the heroine has been delivered from the clutches of the reborn Carmilla (Annette Vadim), who just a few scenes earlier kissed Georgia (Elsa Martinelli) amid ruby-colored roses after the two were caught in the rain. Snuggling against her husband en route to their honeymoon, Georgia seems to have safely returned to the "normal," "correct" world of heterosexuality. But amid this reverie, the rose she's clutching wilts in her hand. She's been "infected" with Sapphic desire. She will never be the same again. 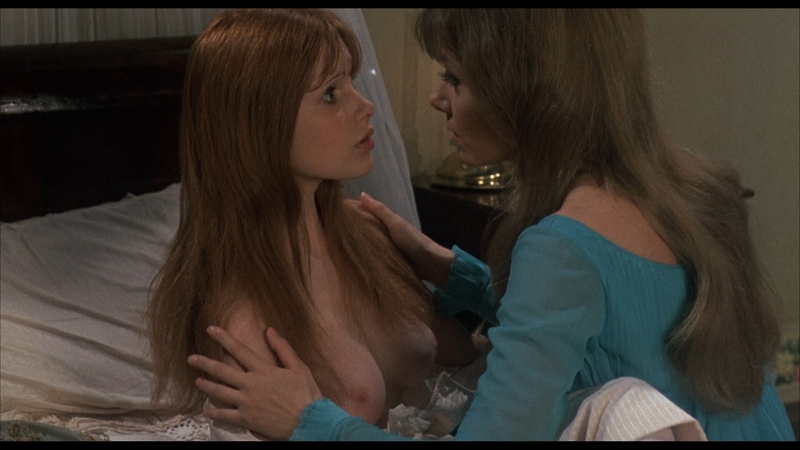 In The Vampire Lovers (1970), Carmilla's many conquests also don't know they're being seduced until it's too late. With her strawberry blonde hair piled on top of her head, Ingrid Pitt's Carmilla is strikingly beautiful, vaguely foreign, and tormented. (You can tell by the eyeliner.) She's also the epitome of a predatory lesbian, using hypnosis to seduce her victims and then cruelly abandoning them once they're in her thrall. Like the patriarchs who couldn't figure out how sex between women would work, the film assumes that, as Bonne Zimmerman writes in her 1981 essay Daughters of Darkness, "elements of violence, compulsion, hypnosis, paralysis, and the supernatural must be present" for a woman to prefer the company of other women.

In contrast to the unattainable, fascinating Carmilla, her victims are guileless and a little slow. One of them, wide-eyed redhead Emma (Madeline Smith), is practically begging to be bitten, so oblivious is she to Carmilla's tender caresses and lusty stares. (And the film's in general—few movies outside of Russ Meyer's breast-obsessed oeuvre are as fixated on cleavage as The Vampire Lovers.) Compared to its counterparts in the '50s and '60s, The Vampire Lovers is relatively explicit: The word "lesbian" is not uttered, but Carmilla does strip naked and whisper, "turn out the light," after luring Laura's nanny into her bedroom. The woman will die defending Carmilla, who barely notices that she's gone. 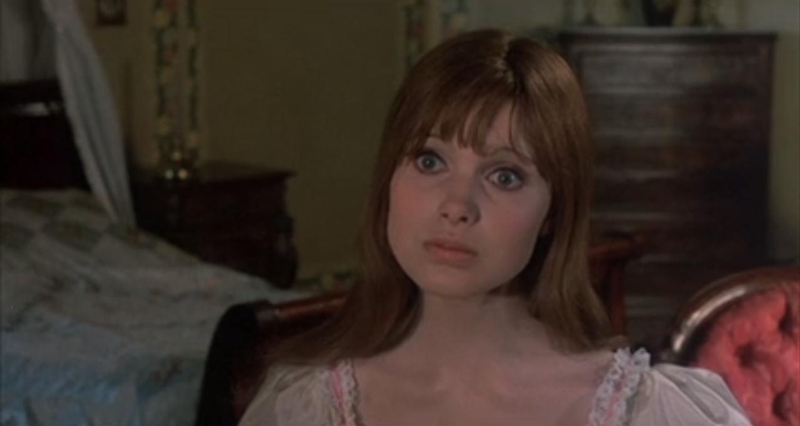 The idea that queer sexuality is inherently predatory, that lesbians are cold, narcissistic women who use up and throw away innocent girls, is so blatantly homophobic — and obviously wrong — that it barely seems worth unpacking. But assuming that society has progressed beyond these stereotypes is also incorrect. Such arguments are still used to justify excluding LGBTQ+ people from public life for the sake of "protecting children." If anything, inflammatory rhetoric about predatory queers is having a renaissance in the form of scaremongering about trans women in public bathrooms (and just generally existing anywhere on Earth).

But to reject Carmilla as a harmful, one-dimensional stereotype is to misunderstand this complex and ever-evolving figure. Although the character herself remains elusive, the feelings she evokes in Laura — longing, alienation, confusion, depression — are familiar to anyone who's ever been closeted. The closet is a lonely and ambivalent place, where a person is living, but not really alive. Carmilla offers an alternative: By comparison, becoming a crazed nymphomaniac lesbian who worships Satan sounds like a good time, or at least a titillating one. And if men are afraid of her? Even better.

Even the fear of her is thrilling. From the perspective of the lonely, closeted girl with a dark and morbid fascination with punishing a body and soul that will not behave, the idea of being overtaken is appealing. She's been told that the way she feels is wrong; perhaps, if she pretends she has no choice in the matter, no one will know that Carmilla is a savior rather than a monster. Frozen in terror as the shadow creeps over her bed, she forgets how to scream. How convenient.

Stay tuned for the second installment in this four-part series, coming up next week!