Thanks to ALTER and Popcorn Frights, you can! 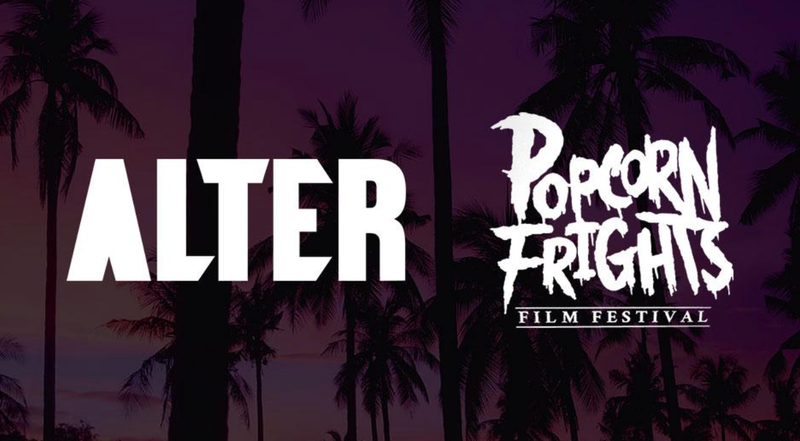 Popcorn Frights is the largest genre film event in Southeast US, delivering the best horror, sci-fi, fantasy and badass genre cinema to South Florida and this year they're partnering up with ALTER for the ALTER Screening Room. Thanks to this partnership, audiences can enjoy free entry to see all of Popcorn Frights' shorts blocks and notable film premieres. From August 19-21, the “ALTER Screening Room” will be located at the O Cinema South Beach, just across the street from the world-famous Ocean Drive boulevard in the heart of Miami Beach. Film fans can catch brand new film premieres selected from across the world as well as Popcorn Frights’ shorts blocks celebrating up-and-coming filmmakers, ALTER representatives will also be in attendance, hosting and moderating panel discussions and industry sessions.

These screenings are free, but make sure to register first! Festival badge holders will be given priority access to register for all “ALTER Screening Room” events. The Popcorn Frights All-Access Badge is now available on sale at the Early Bird Price for $79 for the Single Badge and $139 for the Dual Badge and can be purchased here.

“We live and breathe genre filmmaking at Popcorn Frights. For the past eight years, we have had the opportunity to amplify the work of so many stellar emerging filmmakers, and our new partnership with ALTER will only expand our ability to enrich the next generation of storytellers and create a more inclusive filmgoing experience for our Greater Miami community. In a time when we need movies more than ever, we look forward to having all our fans being inspired by the most bloody international badassery & terror that will premiere at the ALTER Screening Room during this year’s Popcorn Frights Film Festival,” said Igor Shteyrenberg & Marc Ferman, Co-Founders & Co-Directors of Popcorn Frights.

ALTER’s Senior Manager of Acquisitions, Sophie Carroll adds, “ALTER is committed to bringing viewers the best quality horror content in the world, from the freshest voices in the genre. I am excited to scout out the best new films for possible distribution and bring more attention to ALTER’s extensive catalogue. As a horror fan, this is a festival you can’t miss.”

ALTER will be considering all the short films premiering at the Festival for distribution on the online platform. Together, Popcorn Frights and ALTER seek to discover and develop independent and emerging artists, and to provide a platform for them to showcase their works to a global audience.

Celebrated as one of “The World’s 50 Best Genre Festivals” by MovieMaker Magazine, Popcorn Frights’ eighth edition kicks off August 11-21, 2022, with more than 8,000 filmgoers and industry professionals expected to attend its summer week of wicked films, events, and parties. In addition to the “ALTER Screening Room” at the O Cinema South Beach, this year Popcorn Frights also returns to the landmark Savor Cinema in downtown Fort Lauderdale, a state-of-the-art theater which was originally built as a Methodist Church in the 1940s. All screenings at the Savor Cinema will take place from August 11-14 and will be ticketed events.

Submissions to the eighth annual Popcorn Frights Film Festival are also still open via Film Freeway with the final deadline set for July 8. Shorts, features, documentaries, animation, film and video — all are welcome and can be submitted at the link: https://filmfreeway.com/popcornfrightsfilmfestival