A comprehensive history of a still-budding scene. 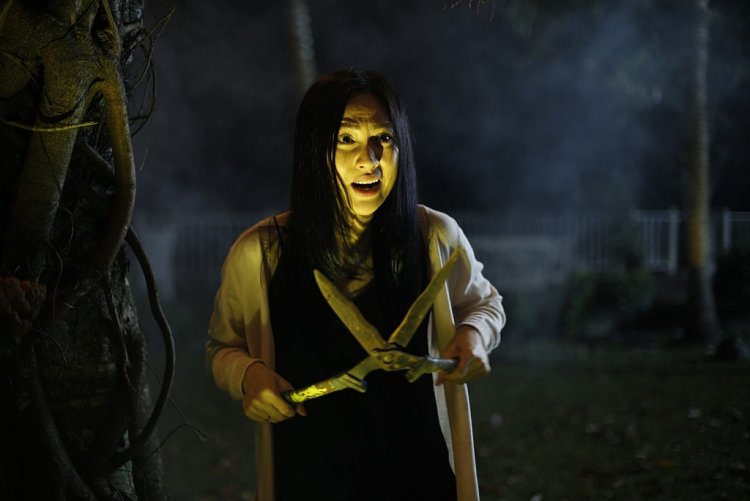 [Spoilers ahead! But remember it can be a struggle to access a majority of these titles.]

Yes, it’s true: Vietnam does make horror films – horror horror, not just wartime horror. While only still a budding scene when compared to the horror industry in Japan, Korea, Thailand or Hong Kong, Vietnam’s horror landscape is an active one, even if omnipresently supervised by censors who align their functions with folkways and, at times, at odds with their young rating system.

The Internet has always been the sanctuary of Vietnamese films of all genres and forms (intact, trimmed and, on rare occasions, banned), often represented as a YouTube video or episodic links on an ad-laced streaming site. Home media release is rare once a title finishes its local theatrical run.

So how my cousin acquired the DVD for my introduction to Vietnamese horror, 2004’s Oan Hon (Spirits) isn’t something into which I wanted to pry. Victor Vu’s film, a 105-minute triptych mainly filmed in the backyard of a home in Santa Ana, California, wasn’t exactly challenging, and a large part of the U.S.-born cast’s Vietnamese pronunciation wasn’t perfect (major kudos, still!), but this was a colossal, watershed moment. While vibes strongly reminiscent of Ringu and Dark Water can be felt in the ghostly sequences, what mattered most to me was that the movie allowed me to answer, “Have I seen a horror film that was made in Vietnam or by a Vietnamese-American filmmaker yet?” with a “Heck yeah!”

In Vietnam, it’s newsworthy any time a horror film passes the censors. 2007’s Korean-Vietnamese co-production Muoi (Muoi: The Legend of a Portrait) was perhaps the earliest example, with director Kim Tae-kyeong’s film the flashiest title in the resurgence of “made in Vietnam” horrors at the time. Despite hallmarks that made Korean media my people’s daily sustenance – Drama! Jealousy! Ghosts! – the film proved to be more bite than bark. On top of the ho-hum plot, violence was prioritized over story. For censors, there were a broken foot, an impaled monk and a strangling death. Muoi was far from perfect, but it was a taste cinemagoers were rapturously hungry for, even if to some, this was a heavily foreign interpretation of Vietnamese culture.

'Muoi: The Legend of a Portrait' trailer

History repeated itself when I saw publications drumming up the release of 2019’s Cha Ma (Ghost Father) from Nguyen Ba Vu, touting that the film had zero cuts. Ticket sales were reportedly underwhelming, though, with the director citing reduced showings due to a competitive August schedule as a potential reason.

But wait, no cuts? The ghost in Cha Ma is primarily kind, still a parent after death à la Tony Stark to Spidey. It’s presumable, then, that the fear factor was considered at an acceptable level by national censors, offering more freak-outs by way of sounds than visuals.

2011’s Giua Hai The Gioi (Between Two Worlds) used the same approach with mixed results, due to awkward placements and cartoony amplifications. That film, however, also dodged secondary editing. This miracle may have stemmed from how it used more of its footage to send a message – one of karmic justice – than to entertain via scares.

In Giua Hai The Gioi, the haunter guided a vile husband to his demise, similar to the morality lesson in another film from Victor Vu, 2018’s adaptation of the horror play Qua Tim Mau (Vengeful Heart). “Sow winds earn storms,” as the saying goes – and can lead your supernatural film to calm seas, apparently. Vengeful Heart’s box office is currently the 12th highest in Vietnamese cinema’s history.

The safest bet, however, is to include humor. At the most basic level, hahas are Vietnamese audience catnip and a revenue magnet in a country big on comedy. Going deeper, the placement of a laugh after or during a scare allows the film to include more extreme set-pieces from a censorship standpoint. 2015’s Tham Tu Hen Ry (translation: Detective Hen Ry), 2016’s Benh Vien Ma (Ghost Hospital) and 2019’s 55 billion VND (almost $2.3M)-grosser Phap Su Mu (Blind Shaman) can all attest to this.

As you may have noticed, “record” is as close to “Vietnamese horror” as cheese is to wine. It has always been a true relationship, with the not-earliest-but-most-popular example being 1972’s Con Ma Nha Ho Hua (The Ghost of the Hui Family). The black-and-white film was based on a (still!) popular legend about the daughter of ultra-wealthy Chinese-born architect Hui Bon Hoa, who died young of leprosy and was buried yet could still be heard – or sometimes seen – in her 99-window midtown dwelling (it’s now Ho Chi Minh City Museum of Fine Arts, which is around the corner from my mother’s house). As a widely circulated picture of an old news article shows, the film made 4.5 million VND on day one and was a hit for months.

Various writings pointed out that, other than eerie technicals that director Le Hoang Hoa supplied and viewers’ then-new exposure to horror, one of the major drivers behind the film’s success was having a release window around Hansen’s disease’s 100th anniversary. And with that, the film’s twist: the daughter was very much alive, but as a leper she was bound to the disappointment room. Her “haunting” was none other than her living agony. A remake with Hoa back at the helm was planned in 2007, but ultimately funding couldn’t be secured.

Well, better for a film to meet its end at the planning stage rather than at completion, right? Another Vietnamese-American filmmaker, Le Van Kiet of the Veronica Ngo-starrer Hai Phuong (Furie), saw two of his projects receiving the fatal ban: the teen horror Bay Cap 3 (High School Trap) and the zombie found footage Rung Xac Song (The Lost Tour: Vietnam). Per local reports, Bay Cap 3 was axed just days before its 2012 release since its cast – comprised of the country’s “hotboys” and “hotgirls” – didn’t mind showing off their physiques, and the storyline involved the anti-folkway element of revenge by way of Jigsaw.

Only heaven knows what the reasons were for 2014’s The Lost Tour: Vietnam, but along with Bay Cap 3 its cancelation was another disappointment for local horror lovers. To be fair, however, both might be tough sells to the masses with their impressively Western traits of Crystal Lake campers, Romero walkers and queasy camera work, to name a few.

Under the Western model of filmmaking, Kiet’s prior success –2012’s Ngoi Nha Trong Hem (House in the Alley), which bagged 2.4 billion VND (almost $104,000) on opening day – would have given him the go-ahead on whatever his next project may be. The same goes for director Ham Tran, especially when his 2014 full-blown possession flick Doat Hon (Hollow) brought in 12 billion VND (nearly $520,000) after four days, but then his latest fare Thien Linh Cai (Kumanthong) had to mitigate its horror, undergo a tonal shift and change its title to see a release date. His film, now a crime-thriller called That Son Tam Linh (Spiritual Seven Mountains), was based on a true story in the 1990s about a killer claiming to be a healer.

While it’s easier to encounter “don’t”s than “do”s, I see no sign of dampened interest in making Vietnamese projects soon. That is why, despite having conditioned myself to the fact that anything can happen to a Vietnamese horror film at any point of its making, audiences are still gleeful when these films materialize. Mid-April should be time for Vo Dien Sat Nhan (Faceless Killer), and then viewers can decide if netizens were right in calling the film a Vietnamese remake of Happy Death Day.

That aside, the more horror films we produce, the more openings to festival circuits we have. At the 2017 LA Film Festival, Derek Nguyen showed attendees Co Hau Gai (The Housemaid). And more recently, Tran Huu Tan’s Bac Kim Thang (Home Sweet Home) had its world premiere at the 2019 Busan International Film Festival. It’s that kind of presence that can hopefully plant something else ripe with potential for the Vietnamese horror film scene. Sadly, it’s been two years since we’ve heard anything about the Reconstruction Era remake of The Housemaid, to be penned by Geoffrey Fletcher of Precious...

But the best kind of report? An urgently-needed update to Vietnamese film laws. In August 2019, at a seminar regarding the matter in Ha Noi, exhibitors, entertainment attorneys, producers, filmmakers and critics all voiced a need for additional transparency, amendments and the like to the regulations that can decide what gets filmed and what gets to be in a film. Director Charlie Nguyen summed it up best when he said, “World cinema has long found the will to reflect society, humanity with its bright and dark sides. In Vietnam, the filmmaker can’t make gritty films, or those that reflect the dark, which is why we only have lighthearted comedy fares.”

There isn’t that much to show for it, but, yes, I believe that Vietnamese horror films have a great pull. I was wrong to think that they would be rejected by a community that remembers dramas and wuxias by heart. It was once a dream to see them at venues beyond local theaters, and now Netflix has recently added Hollow to its Vietnamese library!

Apologies, U.S. subscribers, but do hope that the film, or another horror title, will come to you soon. Not only do your eyes deserve something better than the patchy Conjuring Spirit (original title: Chung Cu Ma, or Ghost Apartment), but you should know that Vietnam has horrors beyond those that Nixon and Coppola have defined for — trời ơi — too damn long now.