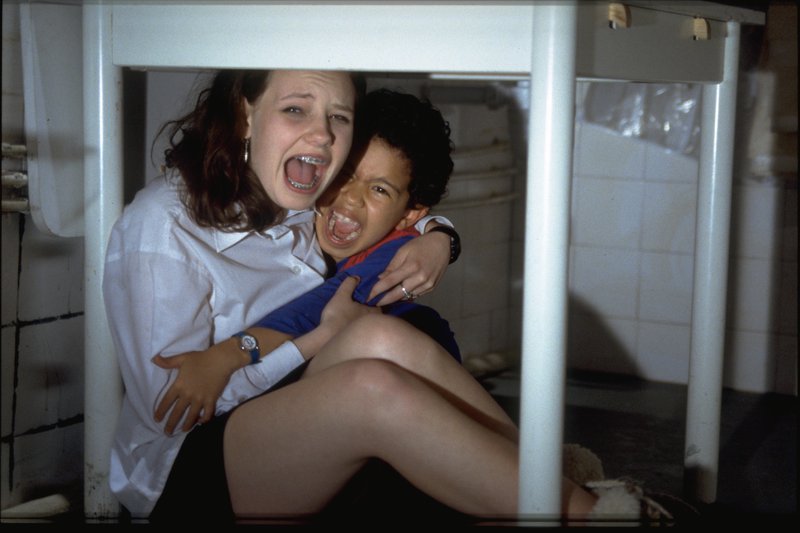 Here is a list of things I was not doing when I was 20:

When it comes to Urban Ghost Story and its director Geneviève Jolliffe, the rest of my list is frankly irrelevant, because this is where Jolliffe and I already deviate in pretty significant ways. When I was that age I was lucky if I could string together a sentence that included both nouns and verbs, and yet here is Jolliffe – who before directing Urban Ghost Story had worked with her long-time collaborator Chris Jones on the features The Runner (1992, alternate title: Survival Island) and White Angel (1994), the former which she produced, the latter both writing and producing – only a few years later making her feature directorial debut in 1998 in a film that powerfully combines gritty kitchen sink realism with the supernatural.

Imagine if Ghostwatch was directed by Mike Leigh or Ken Loach and we start to get an idea of what makes Urban Ghost Story so special. The film follows troubled pre-teen 12-year-old Lizzie (Heather Ann Foster) who lives with her single mum Kate (Stephanie Buttle) and her little brother Alex (Alan Owen) in a decaying council flat in Glasgow.

Lizzie has already lived a hard life in her tiny handful of years; a chain-smoking, disillusioned child, she has recently lost her best friend Kevin, who died in a car accident while the two were on a booze- and ecstasy-fuelled bender that left Lizzie herself dead for a few moments. As if life dealing with social services and the local thugs to whom Kate owes money isn’t hard enough, something seems to have snuck back from the other side into the land of the living with Lizzie, ready to torment the family further, pushing them closer and closer to the edge.

Adding insult to injury is local tabloid reporter John (Jason Connery), whom Kate turns to for help when no one else believes her about the poltergeist plaguing her home. Opening her door on his advice to a parade of grifters – from a German parapsychologist who sees a career-making academic research paper on the cards to a colourful psychic called Pauline (Elizabeth Berrington) – when their plight is sensationalized in the local newspaper, the family becomes a further spectacle, and Lizzie’s life only gets harder from there.

While filmmakers of many kinds – yes, horror filmmakers, too – have traditionally struggled to get attention for films that represent anything beyond the white middle-class status quo, Urban Ghost Story is the rarest of things: it’s white, absolutely, but it is also one of the most authentically rendered '90s horror films about the poor, lower-class world which its cast of central characters inhabit.

As writer, director and producer, Joliffe's film is a microbudget world-building exercise that rejects these default settings in its approach to its subjects in every single frame. Largely, this is made most explicit through the character of Lizzie herself, Heather Ann Foster putting in an extraordinary performance. The most immediately striking thing about Lizzie, aside from her rage and frustration spawned from the miserable conditions of her life, is that she is really young; this isn’t a cynical exercise in trying to convince us that a 28-year-old woman can really pass playing a 16-year-old; Lizzie is 12, and certainly Foster herself doesn’t look a day over it (we even see the character get her first period in the film).

But Joliffe’s true achievement with Urban Ghost Story is the way she aggressively emphasizes how, just as some people are dismissed for their gender or their race, so too class is as much a marker of difference that renders the voices of too many virtually invisible. As Kate struggles to get help for her family as they wrestle with demons both literal and metaphorical, Joliffe time and time and time again reveals that they are just not listened to. Instead, Kate is actively penalized for it.

Urban Ghost Story is an inescapably raw, gritty, low-budget affair, but to miss how consciously it draws a line between the unseen forces of the netherworld and the invisible hand of the bureaucracies and institutions who seem equally intent on destroying Lizzie’s family denies the real power that indie filmmaking can have.

Comparisons to Ken Loach and Mike Leigh might seem hyperbolic, but Joliffe and Urban Ghost Story ultimately don’t need to be tethered to big name fancy pants male filmmakers to justify how good it is; this movie stands on its own, and is an extraordinary snapshot of how poverty, shame, guilt and isolation work together, all through the enduring supernatural metaphor of the ghost.