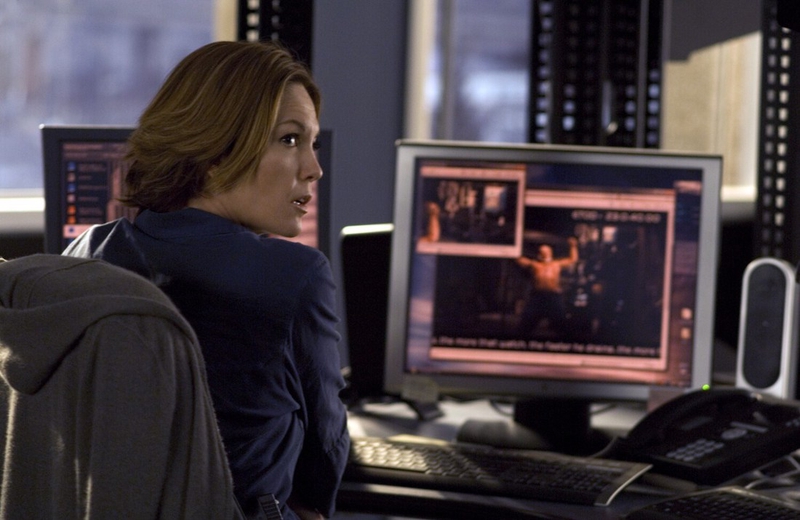 Editor's Note: This was originally published for FANGORIA on January 24, 2008, and we're proud to share it as part of The Gingold Files.

Over the past dozen years, there have been countless serial-killer dramas following in the bloody wake of Se7en, but few have echoed that film’s downbeat worldview to quite the extent that Untraceable does. As in David Fincher’s movie, and perhaps even more so, the central maniac is symptomatic of a greater sickness—one which, the film makes clear, will go on long after this one individual villain is gone. The unusually and consistently somber tone allows Untraceable to maintain a queasy hold that carries one over glitches in the storytelling and deficiencies in the characterizations.

Set in Portland, Oregon (less familiar a locale than Vancouver or Seattle, but close enough for the same kind of gloomy weather), the film focuses on the FBI’s cybercrimes unit, whose members generally spend their time busting identity thieves and illegal music uploaders or posing as young girls to nab on-line perverts. There are so many human victims to be protected that when a website called Killwithme.com first crops up, giving loggers-on the chance to watch the live, slow death of a kitten caught on a sticky rat trap, the powers that be put it low on their list of priorities. Then a shackled, mutilated man appears as the site’s next showpiece, and everyone starts paying attention.

Killwithme.com’s premise is both diabolically ingenious in the currently popular Saw-esque manner, and a comment on today’s bloodthirsty media scene. Its operator has his victim intubated with an anticoagulant drip that in turn is hooked up to his computer equipment, so that the more people log on to witness the horrific spectacle, the faster the captive bleeds to death. Needless to say, the on-line curiosity that killed the cat soon racks up its first human victim, and agent Jennifer Marsh (Diane Lane) is tasked with tracking the perpetrator down before he can broadcast another death for all the world to see—and take part in.

The film’s narrative arc is familiar from both procedural TV series and many past theatrical thrillers, as Jennifer, her younger partner Griffin (Colin Hanks, the spycam stalker from Alone With Her) and homicide detective Eric Box (Billy Burke) deliver pages of technojargon and pursue false leads and suspects while their quarry taunts, stays one step ahead of and eventually directly threatens them. Fortunately, director Gregory Hoblit, a suspense veteran of screens both small (Hill Street Blues, NYPD Blue) and large (Primal Fear, Fallen, Fracture), knows the difference between the two media, teaming with cinematographer Anastos Michos to fill the frame with uneasy mood, sinuous camera moves and, occasionally, edgy tension. Hoblit and scripters Allison Burnett, Robert Fyvolent and Mark R. Brinker had a tricky line to toe here: telling a story that inherently criticizes viewer bloodlust without exploiting it themselves. They largely pull it off, showing just enough of the unfortunates trapped and tortured via super-hot lamps, acid baths, etc. (with squirmily effective special makeup by Matthew W. Mungle) to make the scenes’ point without reveling in the ghoulishness.

Untraceable is less successful at fleshing out its people than it is at removing their skin, though; Jennifer and her partners in crime-solving are standard-issue characters, albeit well-played ones. One wouldn’t expect Lane to take a role unless there was some integrity to it, and she’s given enough of a chance to bring intelligence and maturity to the part that you can almost forgive its lapses into generic heroine territory toward the end. Along the way, a number of dramatic issues are touched upon in the course of the story without being explored in much depth. The way single mom Jennifer’s job takes her away from her young daughter (played by Perla Haney-Jardine, Uma Thurman’s child in Kill Bill Vol. 2), and Griffin trusting the treacherous Internet he patrols to help him meet women—and of course, the killer’s remarkable skill at the computer science and engineering required to carry off his scheme—go unexplained.

The filmmakers do avoid overstating their points regarding Killwithme.com’s Internet popularity, and what it says about society as a whole. The fact that each successive death scenario attracts an increasingly wider audience is pretty much allowed to speak for itself, as is the casual morbid curiosity/sadism of the loggers-on (kudos to whoever came up with the death site’s forum messages that are briefly glimpsed on assorted screens, and read pretty authentically). If the gambits by which the malefactor’s identity is deduced fall into place a little too conveniently, he is given a motivating backstory that’s both plausible and fully appropriate. It fits neatly into Untraceable’s overall view of the cyber-voyeuristic world in which we live—one from which, the movie says, there’s no turning away or turning back, a message that carries more resonance than its grisly particulars.