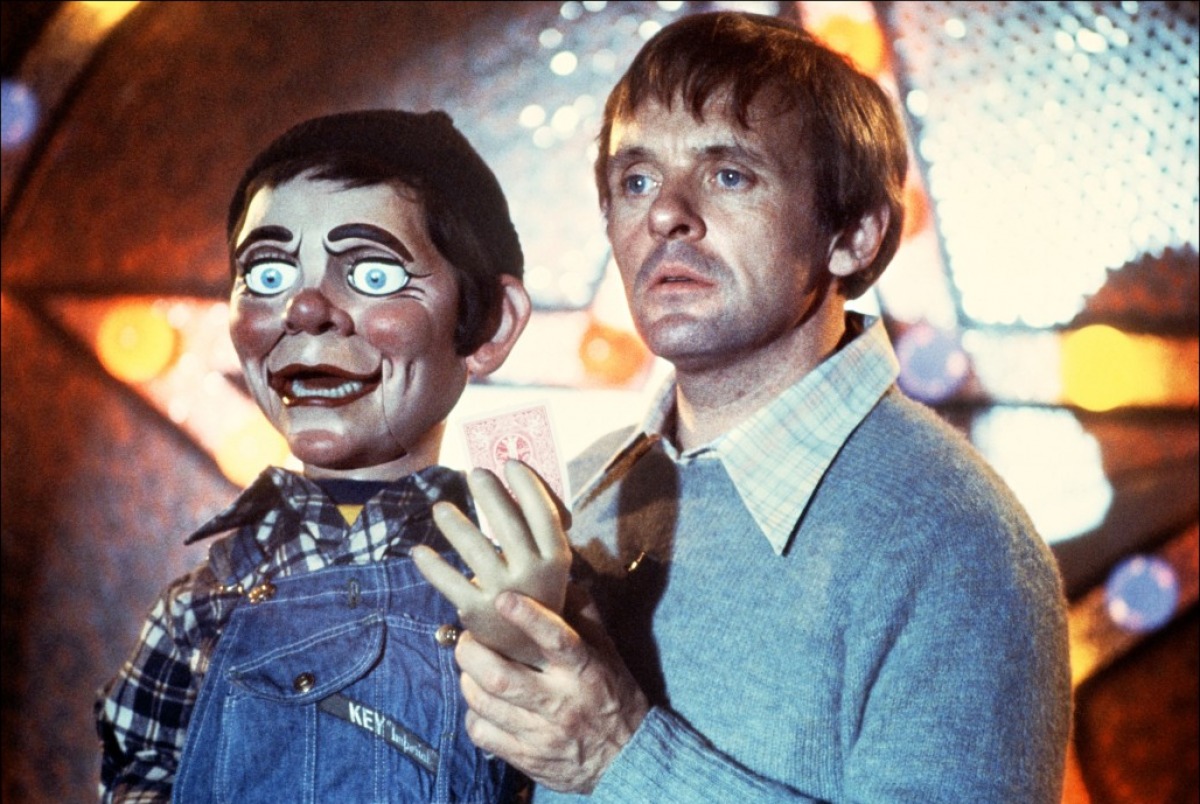 If you’re just joining us, original FANGORIA editor Robert Martin is back on the masthead via this weekly column of thoughts about the many genre offerings currently available on various streaming platforms. This week Uncle Bob has gone down the rewarding rabbit hole of Cinemax’s streaming offerings, with a detour to the riches found on Shudder.

The first feature from the writing and directing team of Jesse Holland and Andy Mitton  concerns how the entire population of the small mountain town of Friar – 572 people – departed the town en masse on a trek into the mountains, never to return. About half the villagers were found dead, either fallen prey to the elements and a hard trail, or victims of brutal violence; the remaining 272 villagers were never seen again.

The film follows a troupe of fresh-faced youngsters who set off on a journey to uncover the mysteries of Friar and its lost citizens. Until now, the coordinates of the trail have been held secret by the government; as one of the party puts it, the recent declassification of the trail’s location will allow the young explorers to transform legend into recorded history.

The origin of the trail is the location of Friar’s movie theater, where the entire town watched The Wizard Of Oz on the fateful night, a story detail that strains all credulity, unless one accepts it under the provision that the growing stockpile of film references and self-references will eventually lend some illumination to the mystery of Friar.

In the meantime, the young explorers are beset by whatever evil inhabits the trail, and so we finally have a question that the filmmakers are prepared to answer, the familiar query, “Who will survive, and what will be left of them?”

That the filmmakers raised more ambitious questions, and chose not to answer them (at least, not in such a way that my limited intellect could detect) is a disappointment.

Tigers Are Not Afraid (Shudder)

The Spanish title of Tigers Are Not Afraid is Vuelven, or They Come Back – which would probably make a better title for a horror movie. But this is no simple horror movie, as it deals with the harsh realities faced by the victims of gang violence in Latin America, and in doing so, it evokes the harsh cruelties motivated by greed that are the stuff of everyday cruelty.

But director Issa López is very much a fan of horror, to judge by her excitement over the news she recently shared with Entertainment Weekly: “Yes, I have a movie with Guillermo del Toro!” she said (EW did not use an exclamation, but I can’t imagine a filmmaker making such an utterance without it. I assume EW erred).

According to López, del Toro asked her, “’What are you going to do next? Let’s do something!’ So, we’re prepping a werewolf movie, a supernatural Western. It’s a werewolf-Western! (EW got the exclamation right that time) I’m super excited. He has the script, I wrote it, he loves it, and we’re gearing up to make it. The thing is, there’s not really that many brilliant werewolf movies. An American Werewolf in London is the big one. I think it’s time to revisit. It’s about revisiting the essence of what it is, which is trying to contain the beast in you. It’s as simple as that.”

The beast that lives in the human breast is the theme of Vuelven as well. Estrella (Paola Lara) is a young girl whose class is working on an assignment to write a fairy tale when gunfire between rival gangs interrupts classes. Amid the chaos that ensues, Estrella’s teacher gives her three pieces of chalk that she says can grant wishes. Classes are dismissed due to continued violence, and Estrella returns home to find that her mother is among the missing due to the growing violence. Estrella wishes for her mother’s return but soon learns that granted wishes always carry a price.

The effects that convey the magic in Estrella's world are modest but ingenious. In thinking of her upcoming collaboration with del Toro, I can't help but wonder if López has seen The Company of Wolves, a werewolf film that shares her fairy tale esthetic.

Galaxy of Terror (Cinemax via Amazon)

In the early 1980s, the majority of low-budget science fiction films were rip-offs of 1979’s Alien. Since these were all science fiction/horror hybrids, FANGORIA covered a few -- those that we thought had some chance of being halfway good, like Xtro (1981) which was reviled by critics on release, but later reappraised as a better film than anyone had thought.

No such redemption is likely for the New World Pictures release Galaxy Of Terror, a film we could smell coming months before its opening. I remember speaking on the phone with Jim Wynorski (an early Fango contributor who was hired away by Roger Corman, first to handle publicity, though he worked his way up to a prolific career as a director of cheap & tawdry exploitation) about a scene involving a nubile female astronaut, who is raped by a giant maggot. If I remember correctly, Jim claimed credit for pitching the rape idea to Corman, who directed the sequence himself when his crew showed reluctance to add such a sequence to the finished film .

After the sequence was added, the film had to undergo a series of MPAA-required cuts, to reduce the impression that the victim was ecstatic during her death by rape, and, In its final form, the sequence gives no impression that the monster is equipped to perform a rape -- I mean, could a giant maggot actually rape a woman? -- and it instead appears that the nude victim ls fatally slimed. Only the ratings warning in the beginning of the film – “rp rape” – assures us that a rape actually occurs in the film.

In retrospect, this sequence is the only real reason to sit through Galaxy Of Terror, but if you do, take note of the production design by a young James Cameron.

The Descent (Cinemax via Amazon)

What will become of Neil Marshall? ln 2008 his first decently-budgeted project, Doomsday, disappointed his fans and flopped at the box office, and this year's reboot of Hellboy failed to sell tickets while also pissing off every fan of Guillermo del Toro. The dimensions of these tragedies are only evident to those who recall 2005’s The Descent, Marshall’s near-perfect low-budget creature feature.

The Descent opens with a group of adventurous friends returning from a white-water rafting trip, but their journey home is interrupted by a grisly road accident that results in the deaths of Paul and Jessica Carter, respectively the husband and daughter of Sarah Carter (Shauna MacDonald).

A year later, Sarah is still grieving her loss, but agrees to join in another outdoor adventure, with Juno (Natalie Mendoza) and Beth (Alex Reid) -- both survivors of the fatal accident -- and friends Sam (MyAnna Buring), Rebecca (Saskia Mulder), and Holly (Nora-Jane Noone). The women gather at a cabin in the mountains of North Carolina to embark on a cave-exploring adventure. Barely have they started their journey than they are cut off from the outside world; Juno has led them into an unscheduled detour, in an effort to get some “alone time” with Sarah, to convince her that she’s a better person than she was a year ago. A small cave-in occurs, and the party is trapped, with no clue how to get out – in fact, no assurance that there is any way out. In Marshall’s original script, that was the full extent of their problem, and in fact the tension already is sufficient to sustain a Man vs. Nature (in this case, Woman vs Nature) thriller. But it’s not enough for Marshall, who ratchets up the tension as pale-skinned cadaverous critters are seen in brief-enough glimpses that they may just exist in a tortured mind.

Or not. We are now surrounded by spoiler territory, and it is best that The Descent is told at its own harrowing pace. And, with some luck, Marshall will be telling us more tales soon.

It’s odd that Cinemax – a service with relatively little streaming horror – should be the online source for Eli Roth’s two Hostel films, but the good thing about that is that most of Cinemax’s don’t-miss horror films can be binged in its one-week free trial. Perhaps the greatest accomplishment of Hostel and its sequel is the demonstration of the limits of the catalog-of-torture approach to filmmaking; both We Are The Flesh and The Greasy Strangler are -- each in their own way -- more extreme in their iconoclastic approach to filmmaking, but neither are as repetetive or as predictable.

The plot for each film is so scarce that a one-sentence description reveals it all (complete spoilage follows):  a group of college students become targets of an “extreme hunting” club – one that allows its wealthy membership to hunt and torture attractive young men and women for the pleasure of it.

Most viewers certainly understand that these films are pitch-dark fantasies; even so, it isn’t too hard to picture attendees at a Trump rally taking either film as a stark warning about what might seep through our “porous borders.” These films do indeed "creep me out," but not in any good way.

Long before 1991’s Silence of the Lambs made Anthony Hopkins forever synonymous with the cannibal genius Dr. Hannibal Lecter, Hopkins made his first mark in the history of cinema psycho-killers with his role in Magic as Corky Withers, an unhinged ventriloquist whose romantic designs on his high school crush lead to murder.

Of course, Lecter’s body count would later make Corky look like an under-achiever, but great casting, including Ann-Margret, Burgess Meredith and Ed Lauter, make Magic worth watching, despite a plot device that’s been horribly over-used (in The Great Gabbo. 1929, Dead of Night, 1945, Knock on Wood, 1954, “The Dummy,” Twilight Zone, 1962, “Caesar and Me,” Twilight Zone, 1964, Devil Doll, 1964, plus dozens of film and TV parodies). Adapted by William Goldman (whose numerous screenwriting credits include the screenplay adaptations of Stephen King’s Misery, The Princess Bride from his own novel, and The Stepford Wives from Ira Levin’s novel), the film’s strength lies within its sympathetic portrayal of Corky’s breakdown.

The ending, unfortunately, is marred by a final shock [spoiler follows] which you can only buy if you think psychosis can be caught like a cold.