Dial “I” For Insecticide: The Top Ten Creepy-Crawlies in Horror

Don't bug out – Diana's here to exterminate all of your insect horror needs. 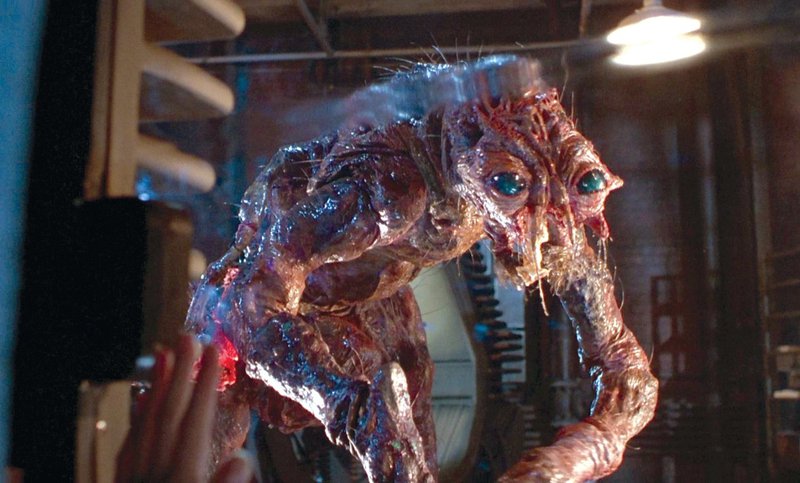 I think it's fair to say that horror fans are not a squeamish bunch. For their own amusement, they seek out bloodshed, gore and grotesqueries. They revel in the revolting! They find solace in sadism! Freddy Krueger is a close friend and monsters are a source of comfort. Yet despite their iron stomachs and stainless steel nerves, there is something that even the most intrepid fright fiend finds disturbing: bugs. And I'm not just talking about city-smashing giants. Mundane, picnic-ruining insects hold more terror than chainsaw-wielding psychos for many horror hounds. The same can be said for arachnids and any creature with an alarming number of legs.  More than any ghoul or ghost, creepy-crawlies get under our skin.

Why are so many of us repulsed by these common critters? Some are deadly, but they say that deer are responsible for an estimated 120 deaths a year in the United States, and you don't see folks recoil in fear at the sight of Bambi. Is it because bugs, spiders and the like are alien in appearance? Perhaps it's the erratic way some of them move? Are we overwhelmed by things that travel in zombie-like swarms? Scientists have been debating the cause of arachnophobia and entomophobia for years... so don't expect to find an answer in this article! I will say this: at every screening of Creepshow I've attended, the only segment that really got the audience jumping was the one with the roaches. And if you dangle a rubber spider in front of even the most dedicated connoisseur of gruesome media, they will scream blue murder. (Trust me, I know from experience.)

If you have an extreme aversion to arachnids and insects, you may want to stop reading this article right now. The hideous beings I'm about to describe will do nothing to alleviate your anxiety. Still, as a devotee to fright culture, I feel it is my duty to pay homage to these buzzing brutes. In that spirit, I now present the top ten ickiest, stickiest creepy-crawlies in all of horror cinema! As a wise Geena Davis once said, "Be afraid... be very afraid!"

It's time to begin with everyone's favorite copout, the tie. (Sorry.)  Both monsters share the same basic story: a matter transporter amalgamates a scientist with an errant housefly, thus creating a monstrous human-insect hybrid. 1958's André Delambre (Al Hedison) is cursed with the head and arm of a fly; 1986's Seth Brundle (Jeff Goldblum) gradually transforms into a gooey abomination. While the two films are very much of their time (Delambre's bulbous bug head is pure '50s pulp, and Brundle's vomit-inducing meltdown could only have happened in the gore-happy '80s), both versions portray their eponymous insect as a tragic figure, emphasizing their loss of humanity and showing the impact the metamorphosis had on their respective lovers. As easy as it would've been to portray the Fly as an inhuman killer who strangles random townsfolk, the two Fly flicks know that a man devolving into an insect is disturbing enough on its own. '50s or '80s, the Fly carries the Franz Kafka Seal of Approval!

THEM! THEM?! What are THEY?! Well, THEY are enormous, radioactive ants that kickstarted the "giant bug" fad of the 1950s. Despite being an early example of a film trope that's often played for camp, Them! is a genuinely frightening flick that plays its core concept as serious as the grave. Aided by great sound design and Oscar-nominated special effects, the ants known as THEM still scare as strongly today as they did in 1954. No magnifying glass can burn THEM! No ant trap can stop THEM! When you hear their high-pitched screech, you know it's game over. (Speaking of "game over," the film was a major influence on 1986's Aliens.)

The final film that the great William Castle worked on, Bug is a positively daffy yet surprisingly effective chiller about mutant cockroaches unleashed by an earthquake. Thousands of killer roaches would be nightmarish enough, but these little creeps can form messages (in English) on the wall with their bodies and burn things with their legs. In one particularly nasty sequence, the roaches set a woman's hair/head on fire in the Brady Bunch kitchen (yes, the actual kitchen). Every one of those delightfully unnerving cockroaches is pretty special in my book, though it seems that William Castle had an affinity for one named Hercules. In the last of his famous publicity stunts, Castle advertised a million-dollar insurance policy for Hercules, which makes him one important insect. Flame on, little fire bug!

Continuing with the subject of Bill Castle, we now shudder at the titular terror from his 1959 magnum opus, The Tingler! According to Dr. Warren (played by Vincent Price), the Tingler is a parasite that exists inside every human being, causing a "spine-tingling" sensation when we're afraid. How do you destroy it? Scream! Scream for your life! It may not be a traditional bug, but it is creepy and it is certainly crawly. Any THING that resembles a centipede and feeds on fear deserves a spot on this list. On top of that, it's the only creature on this list that could affect the real world: The film was released in "Percepto!", a gimmick in which vibrating devices were added to some theater chairs, transmitting the ghastly power of the Tingler.

Roger Corman's The Wasp Woman has one of the most iconic movie posters of the 1950s: a colossal wasp with the face of a beautiful lady terrorizes a hapless male victim. It's a superb image... but it's exactly the opposite of the monster in the film! When in full insect mode, the Wasp Woman has the face of a wasp and the body of... you get the picture! Blatant false advertising aside, the Wasp Woman is a striking beast in the "B" tradition. In human form, the Wasp Woman is Janice Starlin, an aging cosmetics queen who tries an experimental youth formula on herself,  morphing into the aforementioned wasp. Susan Cabot plays the part with absolute dignity, which makes the transformation downright devastating. If you want to check out Cabot's captivating performance and wonderful wasp makeup, the film is in the public domain, so it's not hard to find.

All hail the Queen of the Monsters! Since her debut in the 1961 film that bears her name, Mothra has been a major player in Toho's kaiju pictures. Unlike her science-fictional peers, Mothra is the stuff of fairytales: a fantasy goddess summoned by two literal fairies. She's also one of the few Toho titans to remain consistently on the side of good, defending mankind from pernicious predators and malevolent monsters.  In most of her appearances, Mothra starts off as a giant larva before evolving into her Technicolor self, which is an odd mixture of cute and creepy. In a manner similar to a pair of twin fairies, we sing the praises of Mothra!

There is no such thing as a bad giant spider film, but this one stands above the rest. Directed by Jack Arnold (Creature from the Black Lagoon), Tarantula is top-shelf sci-fi from a master of the genre. Its featured creature excretes venom that infects the hapless victim with acromegaly, resulting in some truly blood-chilling sequences. Also, the Tarantula is the most realistic of the Universal Monsters... because it was real! To achieve the illusion, footage of an actual tarantula was shot against a blue screen and matted into desert footage. That's movie magic!

Guillermo del Toro's 1997 yelp-yarn starts with a plague spread by cockroaches, and it only gets worse for entomophobes from there. Evolutionary biologist Susan Tyler (Mira Sorvino) creates the Judas Breed, who mimic and kill the roaches. Everything appears to be hunky-dory... until the Judas Breed begin to evolve and mimic humans. Though the film was largely taken away from del Toro, his imaginative style is apparent in the Judas Breed. What appears to be a man in a trenchcoat is actually an eldritch insect with the desire to destroy. And that, dear fiends, is why I don't trust anyone in a trenchcoat! For that troubling sight alone, these bugs are among the best. Are you squishing them or are they squishing you?

Saul Bass was the graphic designer who created iconic, groundbreaking title sequences for such films as North by Northwest, Psycho and The Man with the Golden Arm. Despite his legendary contributions to cinema, Bass only directed one feature film... and yes, it's about murderous super-ants. Endowed with supreme intelligence by a cosmic event, sinister ants from different species wage war on humanity, and two scientists try to stop the would-be conquerors. This experiment in the bizarre features kaleidoscopic photography that gives the ants a surreal menace. Most of the film is a game of chess between man and insect, with each side trying to outsmart the other. I won't give away the ending, but let's just say that I'm firmly on Team Ant. I, for one, welcome our new insect overlords.

10) The Spiders (Kingdom of the Spiders):

Here it is, folks: the final entry on the list, and it's a goodie! Most of the previous bugs here have some sort of quirk or gimmick that twist the insect into something fantastical. The brilliance of Kingdom of the Spiders is that the spiders are just spiders. They don't need gargantuan height or superpowers to scare the hell out of you! All you need for a good fright are hordes of real spiders, webbed victims and a terrified William Shatner. Kingdom is to spiders what The Birds is to birds. For the arachnophobic, I can think of no film more horrifying. Its final scene alone should supply enough nightmares for a lifetime. The only thing scarier than the spiders are the incongruous country songs.

Alas, there were many positively putrid insects that I had to omit: the Ticks from Ticks (starring beloved teen heartthrob Clint Howard), Mant from Matinee, the Bee Girls from Invasion of the Bee Girls, etc. The fact that I don't have a single creature filmed by Bert I. Gordon (the king of giant bugs) on the final list perplexes me!  I reckon that’s because beastly bug movies are as abundant as the creatures themselves. I see bug movies as a petrifying play highlighting nature's potential terror. We all love a killer with supernatural powers or a rusty saw, but the human mind seems hardwired to find the deadly capabilities of these real-world monsters that proudly walk in and out of our mouths while we sleep. Jason may get under our skin, but creepy-crawlies can do it for real. Goodnight... and don't let the bedbugs bite.