Conversations with "The great poet of unresolved trauma." 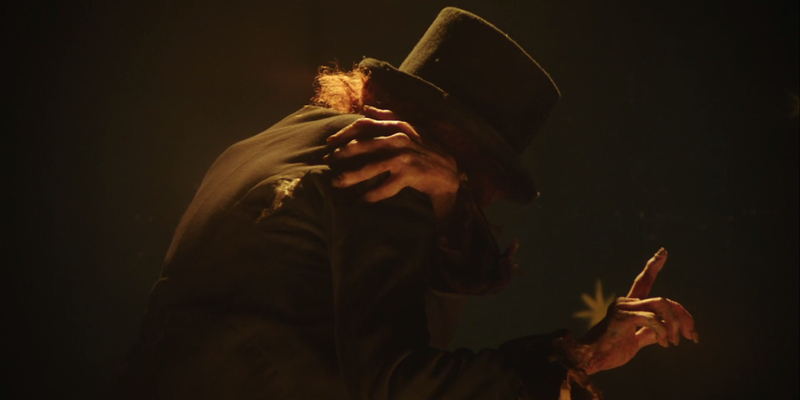 The less you know about Thomas Ligotti by the end of this story, the better. This is for a number of reasons—first and foremost, the standard-bearer of fiction's New Weird vanguard values his privacy. He's somewhat famous for it, actually, and we should all be respectful of that in these dystopian times. Secondly, his already well-documented, objectively horrific physical and mental health struggles make avoidance of the public eye a desired, if not necessary, stipulation of his existence. Thirdly, there exists a labyrinthine online ecosystem constructed over decades by Ligotti's fans, populated by diehard acolytes' analysis, lengthy author interviews, self-important reader diatribes, and all manner of similar ephemera, which make him very daunting to research.

Fourthly and finally—any attempt to profile, summarize, or otherwise examine Ligotti and his legacy is liable to send you spiraling down an echo chamber of meta-examinations on the man, his life, your life, mental health, dark cabaret music, creating art in times of personal and planetary crisis, and the overall nature of existence as it relates to storytelling. Case in point: the piece you are currently reading. It's very tiring.

So where does that leave us—you the reader, and more importantly (in the context of seeing this story to its conclusion) me? Where do we go from here knowing Ligotti, a beleaguered, nihilistic pessimist supposedly wanting nothing to do with this wretched thing calling itself "humanity," prefers to let his work speak for itself?

"I'm aware that seeming aloof and uncaring of others' judgments works for me as the 'cult author' I'm often perceived as being. Usually, that's a euphemistic way of saying that my books don't sell exceptionally well, and I'm not rich, famous, or widely admired, which is true," Ligotti writes me in an email. Gasp.

Over the past few months, I've spoken with Ligotti through online correspondence, chatting about literary influences, his reputation, career trajectory, politics, favorite musical subgenres, and the guitar resale market. Much to my surprise and appreciation, Ligotti shows himself to be an incredibly accommodating, patient, candid, and self-deprecating pen pal. When I told him my girlfriend and I briefly evacuated New Orleans to escape the brunt of Hurricane Ida's wrath, he invoked "the gods of roots American music" keep my resonator guitar and banjo "safe from humidity," and recommended some good ambient slide guitar music in the meantime (For what it's worth, our bedroom ceiling partially collapsed, but my instruments made it out unscathed). (Also, Justin Johnson's atmospheric resonator blues is worthy of Ligotti's praise).

In other ways, Ligotti lives up to his reputation as an uncanny horror writer whose talents are only rivaled by his commitment to philosophical pessimism and nihilism. "The bottom line is that I feel an understanding and even the appeal of a world of nightmare that [humanity], in its largest sense, knows not and doesn't want to know," he writes me at one point. In another email, he makes convincing moral and philosophical arguments for legalizing self-assisted euthanasia, as well as its sometimes-inherent appeal. "I don't understand people who don't understand that in their bones," he ends the email. He is nothing if not consistent.

But let's retrace our steps. How did I convince the mythic author to emerge from the occluding fog to chat? Well…I didn't. He's doing a favor for Michael Shlain, Ligotti's former film and television agent. For years, Shlain has determined to adapt Ligotti's work to the small screen. He's getting extremely close to his goal, too. In 2018, Shlain's production company, Butcher Bird Studios, released "In a Foreign Town", a wonderfully creepy, ten-minute proof of concept film drawing on multiple Ligotti stories. Its subsequent online and horror film fest buzz is drawing the interest of producers, with a full-fledged anthology series in active development courtesy of Shlain's studio.

Although a longtime, uphill passion project for Shlain, there's arguably no better era for In a Foreign Town—and, by extension, Thomas Ligotti—to finally reach the larger audience they deserve. After years' worth of American decline, eco-collapse, and disease, most anyone with a modicum of self-awareness occasionally feels that sense of fundamental wrongness whispering (or, in some instances, shrieking) to us from the backs of our skulls. That specific uncanniness is often extremely difficult to articulate. Unless you've spent your entire career doing just that.

"Sometimes it's impossible to talk about, to convey that [feeling]… it's so chaotic and painful and disorganized," Shlain tells me over a Zoom video chat. "And I think [Ligotti's] great gift is that he's been able to write from that place. It is so articulate, so poetic, so specific, that I think that's why his audience is connected as much as they are…He is the great poet of unresolved trauma."

Shlain doesn't necessarily share all, or even the majority, of Ligotti's views on human existence and consciousness (Shlain worked for multiple years as a suicide crisis hotline operator), but he empathizes with these thoughts' resonance and relatability.

"Many of us grew up with trauma of one kind or another…trauma that is [often] unintegrated. That is an experience that I believe humans experience across the board," Shlain says. "I think that it's only been in fairly recent years in general that there's been a [public] conversation about what trauma is: What do you do about it? How do you heal it? And, essentially, I think Ligotti speaks to that traumatized consciousness."

Shlain envisions an In a Foreign Town series as an anthology surrounding the titular setting, with entries adapted or largely inspired by Ligotti's stories. Characters may cross paths at times, perhaps simply in any given episode's backdrop, but each tale would examine the author's overarching themes—existential dread, self-doubt in a very literal sense, physical and mental despair—through uncanny and weird horrors.

All that said, Shlain's reference to human "consciousness" is a sentiment Ligotti would likely find amusing. To call anyone "real," for lack of a better term, is wholly against the general thrust of the cult legend's oeuvre, which often argues that humanity and its so-called "self-awareness" is not innately impressive or worthy of wonder and praise. On the contrary, it's a rather sick joke played on us by the universe, which in its unfathomable, uncaring chaos, unfortunately, allowed an extra evolutionary step of "consciousness" to fool billions upon billions of "hunks of spoiling flesh on disintegrating bones," as Ligotti describes our species with in his seminal philosophical treatise, The Conspiracy Against the Human Race.

Like many latecomers, I first became aware of Ligotti around 2014 through Conspiracy instead of his fiction shortly after author, fan, and by Ligotti's own description "great friend," Jon Padgett, accused True Detective's creator, Nic Pizzolatto, of plagiarizing the horror writer's cosmic pessimist philosophical treatise. Despite Pizzolatto's workaround explanations, it's difficult to ignore the glaring similarities between Ligotti's writing and many of Matthew McConnaughey's tortuous, much-memed monologues on our collective need to "deny our programming, stop reproducing, walk hand in hand into extinction."

The sudden, strange literary spotlight prompted an entirely new generation of Ligotti fans (including myself), a situation that seems to surprise the author as much as anyone else. "Overall, I think I've done better as a horror writer than I've had reason to expect," writes Ligotti. "At some point, I realized that was my lot and tried to make the most of it. That is, it was the best I could do by way of having anything that could be considered a career."

Self-deprecation aside, it's an incredibly influential and formidable career spanning close to four decades that's garnered three Bram Stoker Awards, among other accolades. A year after the True Detective controversy, Penguin republished two of Ligotti's earlier collections, Songs of a Dead Dreamer and Grimscribe, under its Penguin Classics imprint, making him one of only ten living authors to achieve the honor, alongside the likes of Thomas Pynchon and Don DeLillo.

In some ways, however, The Conspiracy Against the Human Race became a blessing and a curse for Ligotti; a (marginally) lucrative pop-cultural influence that now often overshadows his decades' worth of haunting and resonant fictions. To describe Conspiracy as grandiose or oppressive would be an understatement: If the premise is accepted—that there is no logic, proof, or argument that adds an inherent worth to "reality" as we experience it—then the entirety of human misery as we experience it at any given point in time is not worth the price of admission. It's difficult to argue to the contrary on particularly bad days, but also something often misunderstood by Conspiracy's readers.

"I received at best a highly qualified acceptance of my view of the world…and at worst a vehemently adversarial attitude toward it," Ligotti recounts. "It's not that I expected readers to embrace the ideas and feelings expressed in the book. I'm not that naïve, and that's not the reason I wrote the book, which was to have a record for myself of what I had thought and that was important to me to recall."

Ligotti concedes that, in the end, he doesn't mind the spectrum of responses, or Conspiracy's outsized cultural weight compared to his novels and stories. "Everyone would rather read about others with whose troubles and joys they identify. So did I," he says. "In that sense, I'm just like anyone else. Except there aren't many people in the history of the world who are much like me, [but that] doesn't give them exceptional value in many ways. In fact, it often makes them boring and draining for others to be around, not to mention barely comprehensible as individuals. However, as artists they can reach those few others that are like them and thereby make contact instead of being stuck only with oneself all the time."

In a sense, Shlain's In a Foreign Town project is a bit of a paradox. Its success hinges on proving Ligotti wrong by shining a spotlight directly on the author's work to showcase its unsettling, widespread relatability. A vast number of us may move through our lives without doubting the veracity, much less the potentially inherent immorality, of our existence. But it's hard not to look around and see more and more people listening to that fundamental wrongness in the back of the brain, a voice whose volume grows louder, more intelligible, when Ligotti is translating for us.

"Before you can deal with the light, you have to acknowledge the darkness," Shlain says during one of our chats when explaining his approach to working the crisis hotlines. In a Foreign Town can be seen as an (admittedly unconventional) way of continuing that philosophy, acknowledging a world of traumas instead of continuing to sweep them underneath society's unraveling, blood-soaked rug.

"I don't believe that a world without worth is necessarily one without meaning," Ligotti writes. "It just means something else, and that 'something else' could be an existence with an immensely innate value. I don't wish the lot of a rejectionist depressive to be that of everyone…I could pretend that I'm fine, or not as bad as I am and have been. But that would be pretense indeed, and I'd have to abandon telling the truth when asked…In most instances, that makes no difference. But sometimes it makes all the difference."

The less you know about Thomas Ligotti by the end of this story, the better. But if you must know one thing, know that he'll tell you the truth, no matter its pain.

Watch short film, "In A Foreign Town" below: