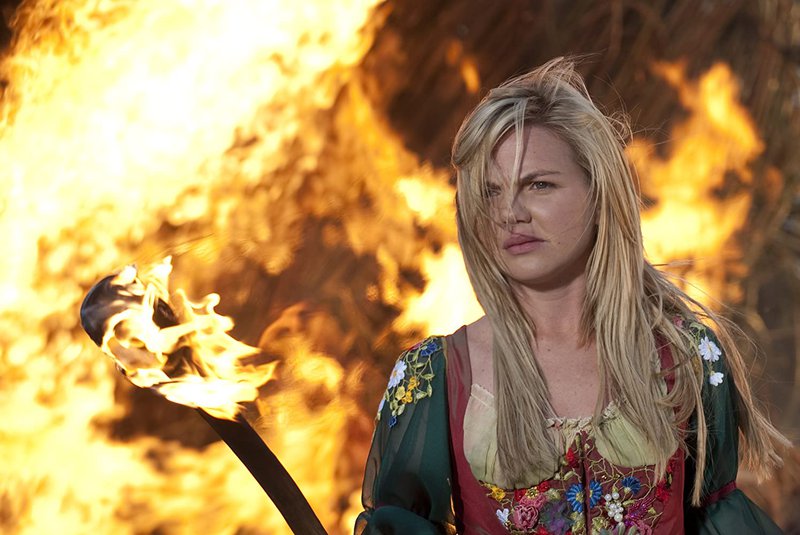 Editor's Note: This was originally published for FANGORIA on May 9, 2010, and we're proud to share it as part of The Gingold Files.

At New York City’s 92YTribeca, fans of Robin Hardy’s 1973 British horror classic The Wicker Man got a special treat. Not only was a 35mm print of the movie screened with Hardy in attendance, but the director unveiled 10 minutes of clips from his latest feature The Wicker Tree (formerly known as Cowboys for Christ). Fango got a chance to speak with Hardy exclusively about the new project, which was partially encouraged by the misbegotten 2006 remake of The Wicker Man starring Nicolas Cage.

“It had been in my mind to do another movie,” Hardy says, “and when they made the Nicolas Cage version, I thought they missed the point of the first film completely. I say point, but I mean points, really. They just used the plot and threw away all the atmosphere and charm, the things which lulled you into a sense of this being a marvelous, fun kind of community, and then wham!—at the end you get the nasty surprise of how wicked people can be en masse when they feel they’ve got a good reason. And that made me want to do the other one that had been in my mind for a few years. Since I’d already written the book, Cowboys for Christ, I decided to make a movie of it.”

That original title is derived from an actual ministry in Texas, and the movie’s storyline opens outside Dallas and focuses on a couple of attractive young missionaries. “One of them is a young woman [Beth Boothby, played by Brittania Nicol] who has become a sort of Britney Spears-like pop singer,” Hardy explains. “During that period, when she was being exploited by her father, she discovered she had a real voice. As you know, anyone can become a pop voice—you or I—with electronic help, but she can really sing, and has decided she wants to be a proper singer. That was a turning point in her life, and when we meet her she’s already a star, getting around in the obligatory long white limo, and has decided to do some service to God.

“Together with her childhood boyfriend [Henry Garrett], who is a proper cowboy, they set off for Scotland,” Hardy continues, “and the theme is that, as in many European countries, God has almost disappeared. They’re picked up by a couple, the man of which is not wholly unlike Lord Summerisle [played by Christopher Lee in Wicker Man], and think they can help them find Jesus—but in effect, they’re falling into a trap. So the first half of the film is the audience realizing that this is not just a wonderful, friendly exercise for them, and the second half is finding out what kind of trap it is.”

Lee was initially set to take the role of Sir Lachlan Morrison, who runs the community, but “he was making a film in Mexico and had an accident,” the director says. “I don’t think it was terribly serious, but it involved his back, and dealing with that is always such a difficult, dangerous thing.” The part ultimately went to Graham McTavish, seen last year as the villain of Penance and more recently in a recurring role on 24. Morrison’s wife Delia (a role originally slated for Joan Collins) is portrayed by Jacqueline Leonard, while Clive Russell, James Mapes and Honeysuckle Weeks also star. And Hardy did eventually bring Lee in to shoot a cameo, reportedly reprising the Lord Summerisle role.

The Wicker Tree footage Hardy screened reveals a mix of modern attitudes with the sort of pagan activity seen in the previous movie. The tone ranges from horrific (including goings-on around the titular tree) to humorous, the latter involving music in a couple of instances: a glimpse of the heroine’s sleazy “Trailer Trash Love” music video, and a scene backed by the Flanders and Swann song “The Reluctant Cannibal.” The director notes that the blending in of lighter elements amongst the tension is very much in keeping with his approach to the ’73 film, which he is attempting to echo as much as possible in the follow-up.

“We used songs and we used comedy and we used sex,” he recalls of Wicker Man, “all to create this society where there are good reasons for the people to do what they do; it’s the failure of their crops in that case. It’s all quite realistic, really, and there’s nothing in the new film that isn’t based, at least to some extent, on fact. There’s a nuclear power station, and the CEO is rather like the character in The Simpsons; he’s wicked beyond belief, but he has a certain amount of charm too. And there actually has been an incident at one of our power stations in Britain, called Sellafield, which is near Liverpool. There was an accident by a creek, and a great many men around the area were affected by pollution of the water table, which made them infertile. So suddenly the community was having no babies.”

In Wicker Tree, Hardy is also harking back to the gradual escalation of suspense in Wicker Man, which doesn’t really play as a fright feature for a good portion of its running time. “I’ve tried to do something that I’m rather surprised horror movies haven’t attempted again,” he says. “In most horror films, especially the ones we make in Britain, you’ve got to have some real bloodstained mess within 10 minutes of the start, or people feel they’re being cheated, right? But their impact is no more horrific than The Wicker Man, I’ve been led to believe, and I think this will be the case here.”

Given the movie’s otherwise all-new cast and separate if similar storyline, it’s worth asking why the Cowboys for Christ moniker was switched to one suggesting a more direct sequel to Hardy’s previous chiller. He says that the change was the producers’ idea, noting, “I actually invented the title, but they kept saying to me, ‘Can’t we get Wicker in there somehow?’ And actually, I and the art director designed this wicker tree that you see in the promotional material, and I am so pleased with that. It’s a marvelous image that really made it worth changing.”

This isn’t the first time a follow-up to The Wicker Man has been attempted. Some years back, Anthony Shaffer, the acclaimed screenwriter and playwright who penned the original, wrote a Wicker Man II script—which starts with (SPOILER ALERT for those who haven’t seen the first film) the Sergeant Howie character played by Edward Woodward falling through the floor of the burning title construction and surviving! Hardy, who wasn’t offered the sequel and has never read that script, says, “I know Tony did write that, but I don’t think anyone particularly liked it, or it would have been made.” He adds that that opening contrivance reminds him of an ending change to The Wicker Man proposed by a potential American distributor: “He suggested that it rain heavily, sort of like the U.S. Cavalry arriving!”

Hardy did not in fact direct another feature until the 1986 psychothriller The Fantasist, and scripted 1989’s The Bulldance, a.k.a. Forbidden Sun, which also focuses on ancient rituals performed in a modern setting, this time a girls’ school. He has kept busy authoring novels, working in UK TV and as a journalist, and is looking forward to sharing his particular vision of the genre with audiences when The Wicker Tree is released. “It isn’t a sequel or a prequel, it’s another film in the same vein,” he says. “What I’m interested in saying is that this approach still works. The way The Wicker Man was constructed and the way most horror films today are constructed are totally different, and I believe it was a quite interesting alternative. It makes the film more intriguing. You can have more things in it than just horror.”