Special Report: THE THEATRE BIZARRE Is A Knockout—Literally! 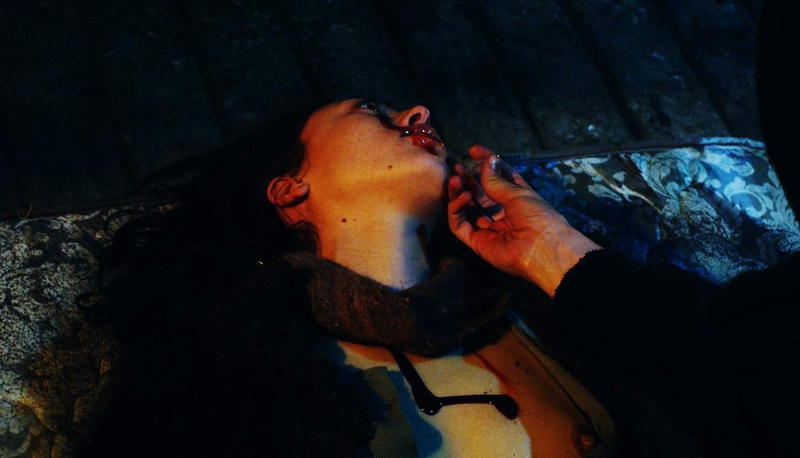 Editor's Note: This was originally published for FANGORIA on September 23, 2011, and we're proud to share it as part of The Gingold Files.

When the seven directors behind The Theatre Bizarre set out to craft their contributions to the Severin Films/Metaluna Productions horror anthology, they certainly intended to shock and disturb their audiences. But when the movie screened recently at Germany’s Oldenburg International Film Festival, the reactions were a little more extreme, including a couple of faintings. A few of the filmmakers on hand shared their account of these events with Fango.

“It was one of my favorite screenings of all time,” Buddy Giovinazzo, who helmed the I Love You segment, reports. “You always hear about people passing out during movies, and for the most part I never believe those stories. But we had two people pass out at the same time! It was amazing. Doug [Buck, The Accident] and I were hanging out in the cafe area having a drink, when during Karim [Hussain’s] story [Vision Stains, pictured above], a guy came out of the theater and went into the bathroom. Shortly after, Doug heard a crash in the bathroom and went to investigate, and found the guy flat on the floor puking, with blood coming out of his nose.

“At that point another guy came out of the theater—Doug’s cousin, no less!” Giovinazzo continues. “I thought he was drunk because he was swaying around. He was hanging onto the door, swung it all the way open, then collapsed like a sack of laundry to the floor. I rushed over with [his wife] Gesine, and as Doug rushed out of the bathroom to tell us that guy just passed out, he saw his cousin fainted on the floor! Gesine sprang into action, hopped over a bar that was closed at the time and got water and wet towels for both victims of The Theatre Bizarre. After about 10 minutes they were OK, though still a bit shaken up. From what people said after the screening, it was the accumulation of abuse that did them in, but it was Karim’s film that dealt the knockout blow.”

Buck, who edited Hussain’s piece among others, offers his own inside view of the events: “When the guy passed out in the bathroom while I was in there, man, that was seriously scary—for a minute or two. Once I realized he was going to survive and his nose wasn’t broken after smashing into the urinal on the way to the floor, my concern was quickly replaced with a certain glee I’m sure you can understand. And I should note that the sister of that guy was in the theater watching the film—and decided to stay until the end, even after being told her brother had passed out! I am extremely proud to have been involved with the only two screenings in 18 years of the Oldenburg Film Festival in which people collapsed: Cutting Moments in 2001, and now Theatre Bizarre. My mother is going to be horrified when she finds out one of them was my cousin!”

Richard Stanley, who helmed the Mother of Toads story, started out the screening within the auditorium, and was witness to the increasing disturbia that overtook the room. “We won the audience over early with jumps and laughter during Mother of Toads,” he recalls, “followed by reassuringly hearty applause. They fell a little quiet during the first half of Buddy’s segment, as if unsure which direction the film was moving in, but once I Love You started getting decent laughs in its second act, they were with us all the way. The laughs kept building with Tom Savini’s Wet Dreams, and having settled into the notion that the film was essentially a black comedy, the viewers were left wide open for the sucker punch of The Accident. By the time Visions Stains began, they no longer knew what to expect, how to react or which way to turn. There were a couple of what I took to be walkouts during the scenes of eye trauma, but it was only when one of the figures stumbled in the doorway near my seat that I noticed just how intense the atmosphere in the auditorium had become.

“An individual, whom I later learned was one of Doug’s cousins who had come with his increasingly traumatized wife, physically collapsed in the exit, body blocking the door, thus affording me a clear view of the carnage in the foyer beyond,” he continues. “The other man made it as far as the bathroom before collapsing; he was still breathing, but was bleeding copiously from the nose and didn’t look good. Doug, Buddy and Gesine had opted to sit out the screening in the foyer, and now found themselves dealing with what was rapidly becoming an outbreak of mass hysteria. Their first intimation that something strange was in the air came when a young German girl reeled out of the cinema during Wet Dreams clutching her heart, and yelled, ‘You all are totally f**king my brain!’

“They had just managed to get the subsequent casualties into the recovery position, and were debating whether or not to call an ambulance, when noted actress and all-around figurehead of the festival Deborah Kara Unger [Crash] arrived with her mother in tow. Deborah blanched, shocked and surprised to find the place had become a war zone. As Gesine fetched water and cold towels, Deborah’s mother weaved past me through the open door into the darkened cinema to see what all the fuss was about. Her timing couldn’t have been more severe, as she was immediately confronted by Visions Stains’ graphic denouement. Turning on her heels, she high-tailed it back into the foyer. ‘The stories are given life,’ Udo Kier intoned on the screen behind us. ‘Even as the real world slips away…’

“For the next 24 hours, Deborah refused to look me in the eye, but there was no real harm done, and by the closing party she had all but forgiven us for the wave of horror that had convulsed the audience at Cine K. ‘It was as if the air was being sucked right out of the room,’ Doug’s cousin later offered by way of explanation. I’ve heard of this sort of thing happening during the first run of The Exorcist back in the ’70s or at screenings of Buñuel’s The Golden Age and The Andalusian Dog—itself containing a classic early example of eye trauma—but I never expected to witness a similar reaction from sophisticated 21st-century viewers. Of course, this was the first time The Theatre Bizarre had played at optimum strength to a non-genre audience, which may have had something to do with it. Quite frankly, it reassures me of the awesome potential of the silver screen to serve as a kind of mind-bomb to effectively blow gaping holes in the viewing public’s perception of waking ‘reality.’ ”

The last word goes to Oldenburg Festival director Torsten Neumann, who tells Fango, “That screening was something very special—also in the history of the festival. We’ve had screenings that caused strong emotional reactions before, but two people fainting during a screening is the strongest attachment between audience and film we’ve ever had in 18 years! Besides that, the movie was wonderfully received by those who didn’t lose consciousness; I heard that the sister of one of the casualties didn’t leave the screening even after she heard that her brother was puking outside—powerful movie!”