The Return of Beyond Fest: Part One

It's alive! LA’s premiere horror festival roars back to life with a vengeance. 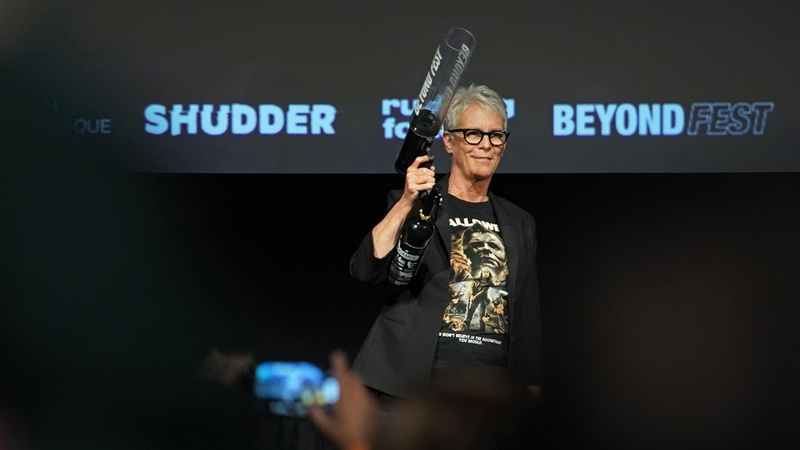 The supreme leader at the HALLOWEEN KILLS screening.

My first Beyond Fest experience was in 2015, the year I moved to Los Angeles. Screenings were held in the historic Egyptian Theater, which I'd typically stagger into after a strong martini from the historic Musso and Frank restaurant a few doors down. Buzzy new titles like The Invitation played alongside rep favorites like Evil Dead II. Tickets were affordable for the main events, and a decent portion of the lineup was totally free.

Among the festival's most amusing features were the absolute freaks who introduced each show. It was four guys – usually dressed in outlandish costumes, three of them implausibly British – bouncing around the stage, cursing like sailors and firing merch projectiles at attendees from a compressed air cannon. It soon became evident that these lunatics ran the place, and their maniacal enthusiasm had infected the crowds who heartily engaged in call-and-response banter with them. To the films themselves, the crowds displayed a calibrated blend of rowdiness and reverence that can only be found among true believers.

It was a pretty great introduction to filmgoing in LA, and I've made it a point to attend every year since then. Except, of course, for last year. My sole Beyond Fest 2020 experience was a screening of Bryan Bertino's The Dark and the Wicked. All I can say is that the film really delivered on the first half of the title. It turns out drive-ins, while delightful in many ways, are not ideal projection environments for films with extremely shadowy lighting, a feature of so many horror films. There was a spirited attempt to recreate the festive atmosphere by substituting honking and headlight flashing with applause. This proved more of a distraction than a source of whimsy. It was an admirable effort on behalf of organizers and fans, but it turned out that even the boundless passion of Beyond Fest was no match for the slow-motion apocalypse. 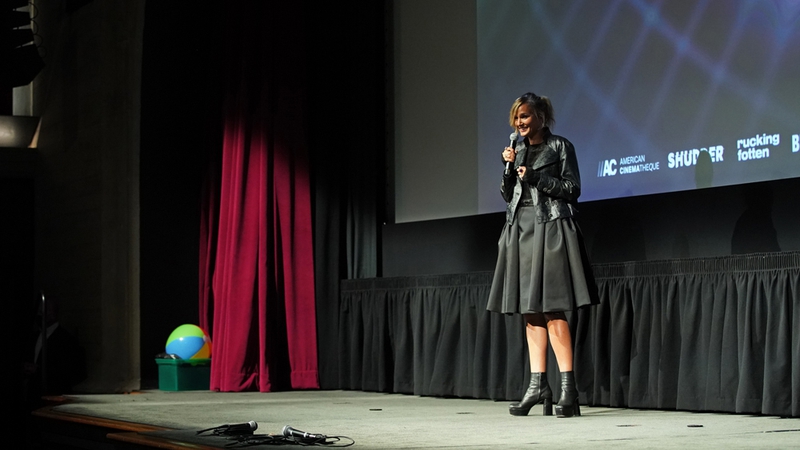 It was thus with great excitement that I returned to the theater for Beyond Fest 2021 last week. With the Egyptian under renovation, the festival had slithered out across the city, its tentacles pulling in The Los Feliz 3 (newly equipped for 35mm), The Aero in Santa Monica, and an unassuming American Legion Post in Hollywood that apparently houses one of the most beautiful theaters in town. It was there that Julia Ducournau's Titane opened the festival. After a quick drink in the gorgeous basement bar (reportedly the oldest speakeasy in Los Angeles), I settled in for the much anticipated West Coast premiere of the Palme D'or winning film. It was starting to feel like old times. By way of introduction, Ducournau herself commented on how exciting it was to be "vibrating" in a room full of strangers, together at the cinema again.

Titane, in many ways, is the ideal Beyond Fest movie. Chock full of shocking turns and provocative imagery, it practically begs to be seen with the biggest possible audience. The nearly 500 people in the room laughed, screamed, and gasped as the film vibrated through us. I heard a hushed "oh no…" from a nearby patron at a pivotal moment, articulating my thoughts exactly. It's hard to overstate the degree to which the film would have been diminished without that sensation of reacting to it with so many others in real time.

"The best times of my life have been in a movie theater," Christian Parkes, one of the programming directors and aforementioned freaks, told me recently. "With the state that industry is in today and the way that movie theaters are under threat, we want to bring as many people into the movie theater to have the best time possible." 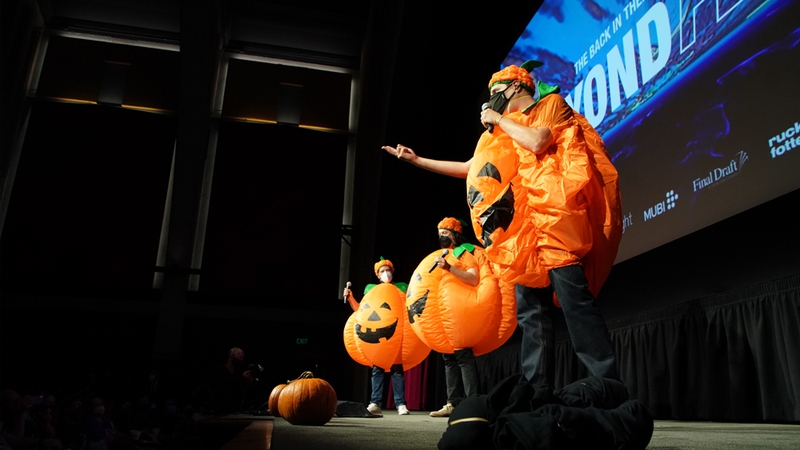 This sentiment, while shared by programmers and venues all over the world, contains a kernel of what makes Beyond Fest so special. At the West Coast premiere of Halloween Kills, Parkes – dressed in a rapidly deflating pumpkin costume – told the audience of a few hundred that there had been over 35,000 click requests for tickets to the screening. While the ticketing process is somewhat maddening to longtime Beyond Fest devotees, there is something radically egalitarian about it. They don't sell expensive tiered badges (or any badges for that matter), and scant few seats at any screening are set aside for VIPs. Rather, the tickets are thrown out to the rabble all at once and prized seating is awarded to those who line up outside the earliest.

This is a crucial distinction, especially in Los Angeles, where coveted early screenings and premieres are often packed with industry folks or people directly involved with making the film. These events are less about the movie and more about social and professional networking. The same is true of top festivals worldwide, where films ostensibly made for cinephiles often lack one crucial piece of the puzzle: the cinephiles themselves. There's nothing wrong with this, of course. These kinds of festivals are, in fact, the primary means by which smaller films eventually find their way to an audience. But Beyond Fest is not one of those festivals. 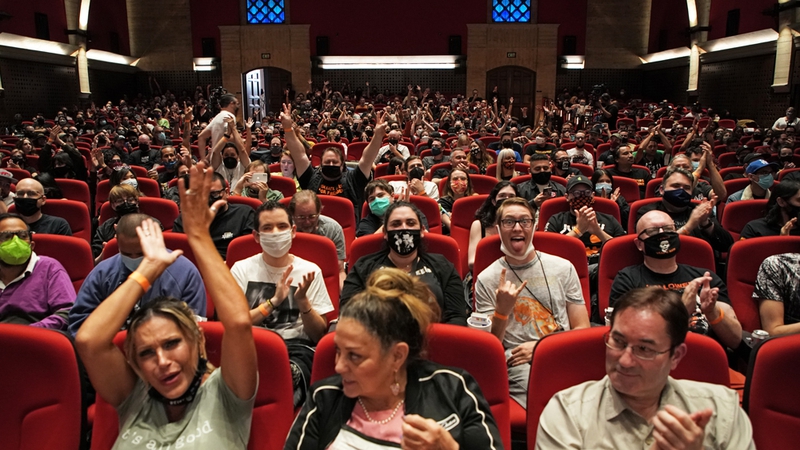 If you go to enough screenings at the festival, you'll hear the phrase "People's Republic of Beyond Fest" many times. It was coined by another programming director, Grant Moninger, though its original context is lost to the sands of time. It started as a joke, but it stuck. The phrase conjures an image of a glorious revolution – a collective of fanatics pledging undying allegiance to the movie palace. It's hard not to be converted by the idea when Moninger describes the "rabid" army of volunteers who "dedicate hundreds of hours" to making the festival happen. The fact that the People's Republic is underwritten by the voluntary labor of the faithful and generates no actual profit serves to solidify the idea of a collectivist cinephile utopia.

This rabid dedication doesn't begin and end with the event. The films themselves, naturally, are the focus of the most fastidious devotion. "If you're going to spend your money, you should get the best experience possible," says Parkes. "And that's not just getting a t-shirt fired at you, it's also seeing the film and hearing the film in the very best way." Beyond Fest's partner, The American Cinematheque, is well-known for having some of the highest projection standards in the industry, particularly for 35mm film.

Consequently, the festival is granted access to some of the very best prints in existence. Couple that with high-quality sound in newly renovated theaters, and the experience vastly exceeds that of the local multiplex. A film that plays Beyond Fest, Moninger says, "will have a life after the festival, but this might be the best it will ever look." If that's not an incentive to come out to a screening rather than streaming the film at home, I don't know what is.

One of the things that those of us who value cinema fear is the loss of a tangible film culture in the wake of the pandemic and the dominance of streaming. Perhaps this is why the collective ethos of Beyond Fest is so comforting. The sense of shared passion is evident among the staff, volunteers, and audiences, but it's also built into the programming. Several screenings are collaborations between the festival and like-minded organizations such as Cinematic Void, Vinegar Syndrome, and Friday Night Frights. Building and nurturing these relationships among organizations and between programmers and audiences may be the best hope for a sustainable film culture. In a world where the future of moviegoing is uncertain, Beyond Fest provides a refreshing vision of what it looks like when the lunatics run the asylum.

Beyond Fest runs through October 11, 2021. Visit the official website for schedule and ticketing information.