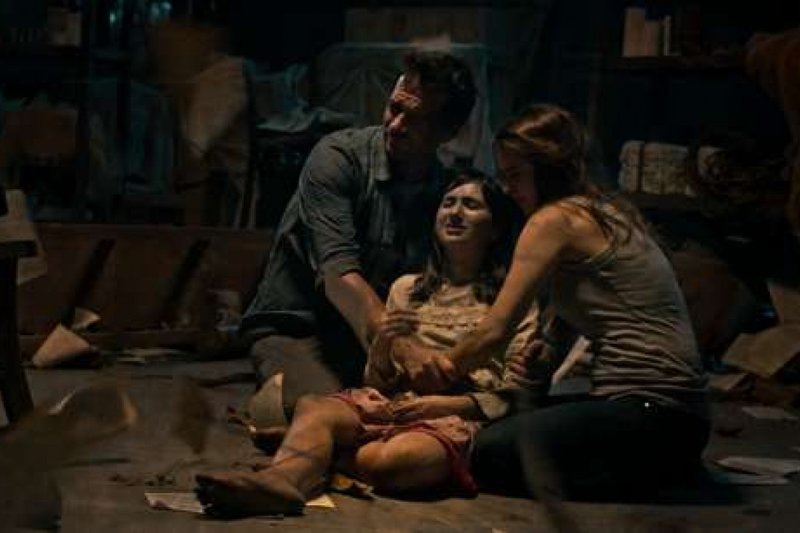 Editor's Note: This was originally published for FANGORIA on May 6, 2016, and we're proud to share it as part of The Gingold Files.

The promise of Singaporean writer/director Kelvin Tong, whose credits include the 2005 ghost story The Maid, making his first English-language film is squandered in The Offering, a jumble of borrowed tropes from past supernatural flicks both Asian and American.

Originally titled The Faith of Anna Waters, the movie opens with found footage of an exorcism performed on a possessee who rants in a very Evil Dead-esque voice, and proceeds to a setup that (no doubt coincidentally) echoes that of The Forest: an American woman traveling to Asia due to tribulations involving her sister. In this case, journalist Jamie Waters (Elizabeth Rice, seen to better advantage in the underappreciated From Within) heads across the Pacific following the suicide of that formerly eponymous sibling. Anna killed herself by tying a paper bag over her head, as Jamie learns when the authorities blithely show her close-up video of the act, which Anna managed to “accidentally” record on her webcam.

Meanwhile, across town, Fathers Da Silva (Colin Borgonon) and Matthew (Adrian Pang), who were present at that prologue rite, are contending with cyber-attacks on church computer systems. Matthew comes to the conclusion that the Biblical Tower of Babel (which he pronounces “Bay-bel”) is rising again through supernatural influence, helped along by a computer screen on which “The Tower Rises” is scrawled. The rest of the movie is this bluntly expositional, and there’s a lot to…exposition. A key plot point is the grief of Anna’s young daughter Katie (Adina Herz), who, like her mom, has Huntington’s Disease, and thus is shown early on to require being fed through a tube in her stomach, except when she doesn’t for the rest of the film. Anna believes her mom is coming back from the dead in seven days, a period of time that seems arbitrarily borrowed from Ringu, as does the appearance of a few ghosts who pop up equally arbitrarily throughout the picture.

There’s a lot of random stuff thrown in during The Offering; it’s the sort of film that gives us a jump scare with a dummy in a diving helmet in one scene, and a centipede-spewing apparition of deceased Anna the next. There are anagrammatic clues (Quick! What do the names “Eva Lathin” and “Eli Vantha” unscramble to?), a mystical symbol resembling a phallic TV antenna and a telescope through which one can view past events and present spookery, all while Jamie’s attempts to get to the bottom of it all take her from a scary room under the house to the offices of a major communications company (which for some reason is named Subterfuge). None of it coalesces into a coherent or impactful storyline, and far from an entertainingly off-the-rails example of Asian genre filmmaking, The Offering is weighed down by an overall solemn seriousness in the telling and an insistence that it’s all leading somewhere meaningful, to the tune of music that frequently borrows Joseph Bishara’s screechy Insidious strings.

Ultimately, Katie’s bed starts misbehaving and tossing her around, and then Sam has a vision of a one-shot Silent Hill-esque demon, and it all leads to a finale combining those of The Exorcist (complete with a spinning-head effect) and The Conjuring. It’s never clear, plotwise, what is supposed to be on offer in The Offering, though anyone with any familiarity with occult flicks will find they’re being sold a very secondhand bill of goods.