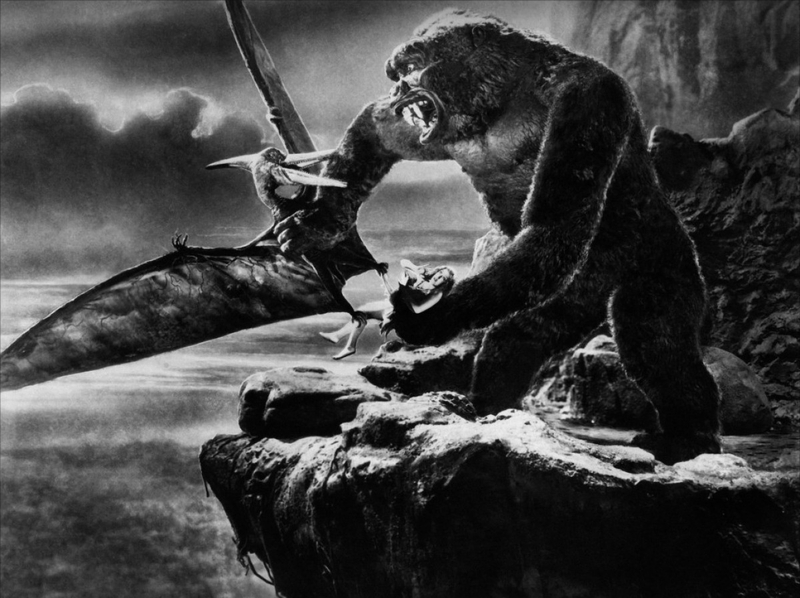 Editor's Note: This was originally published for FANGORIA on November 18, 2005 by Don Kaye and Michael Gingold, and we're proud to share it as part of The Gingold Files.

Although the long-awaited release of the original 1933 King Kong is clearly timed to coincide with the arrival of Peter Jackson’s behemoth remake, someone at Warner Home Video must have deliberately scheduled this deluxe DVD’s street date as close to Thanksgiving as possible. For many of us—particularly in the New York area—our first memory of seeing the father of all monster movies is tied to Thanksgiving marathons (on Channel 9, the old WOR in New York) of Kong, The Son of Kong and Mighty Joe Young, the latter two of which are also debuting on disc separately and as part of a four-DVD collection. Thanksgiving, for these writers as young boys, revolved not so much around turkey and all the trimmings, but was about eating as quickly as possible so we could leap from the table and plant ourselves back in front of the TV, where we became lost in the terror and awe of the Eighth Wonder of the World.

That terror and awe is fully intact on this lavish DVD, which is also available in a separate, beautiful tin case featuring glorious artwork on the package itself, with a reproduction of the original premiere souvenir program and postcard-sized replicas of original one-sheet posters. The film is presented on one disc, while a second platter is devoted to an exhaustive, archival documentary prepared with the full involvement of Jackson and members of his production team, who display that same enthusiasm for this beloved classic as those long-ago kids on Turkey Day.

Kong the movie holds up perfectly well, and in fact better than ever in this uncut, restored presentation. TV airings of the film used to clip scenes of Kong chewing on Skull Island natives or peeling the clothing from Fay Wray’s shapely body, but this is Kong in all his glory, and the film stands as an exciting, tense and terrifying thriller with pacing and setpieces that leave the viewer breathless. The story is simple and elegant: adventurous filmmaker Carl Denham (a sharp Robert Armstrong, whose character was based more or less on Kong mastermind Merian C. Cooper) takes former street waif and new leading lady Ann Darrow (Fay Wray) on a chartered boat to Skull Island, where he intends to discover and film a legendary beast known only as Kong. Once they arrive at the unexplored island, the natives kidnap Ann and sacrifice her to their native god—the gigantic gorilla who is oddly captivated by the blonde beauty and keeps her alive. But his attraction also proves to be his undoing, as Kong—after numerous battles with the island’s dinosaurs—is brought down by Denham and shipped back to New York, where he faces his ultimate, lonely destiny atop the Empire State Building.

It is “Beauty and the Beast” in epic terms, and as strong as the movie still plays 72 years later, it must have blown away audiences back in ’33. Fabled animator Ray Harryhausen says as much on his accompanying commentary track with special FX wizard Ken Ralston—although as amiable and passionate as the two are, their talk is halting and could have used the strong, authoritative voice of a film historian. Nevertheless, whatever the commentary lacks is made up for in the massive, 158-minute documentary on disc two. RKO Production 601: The Making of Kong, Eighth Wonder of the World is a seven-part chronicle that documents every aspect of the film’s creation, from its origins as a story by Cooper (who produced and directed with Ernest B. Schoedsack) and mystery writer Edgar Wallace, right through to an exhaustive look at the movie’s groundbreaking stop-motion FX, pioneered by Willis O’Brien.

The renowned animator’s work—with contributions by model-maker Marcel Delgado—set a standard for decades, and even as herky-jerky as Kong and his island enemies can sometimes look, there is also an organic texture and eerie energy to them that still makes them more lifelike than most modern-day CGI creations. As director Frank Darabont says in the doc (and we’re paraphrasing here), we remember many classic movie monsters, but Kong is the only one who is not human. With no existing footage of “O’Bie” at work, Jackson and co. go the extra mile and actually recreate the materials, equipment and, on camera, the process used to bring Kong to life, the better to demonstrate it to modern viewers.

All the aspects of the film’s production are covered thoroughly, but the centerpiece of the documentary is a stand-alone segment on the missing “spider pit” sequence, one of the Holy Grails of film historians and lovers since Kong’s release. In typical Jackson style, the director rallies his team to recreate the sequence even as they’re working on the new Kong (joking that they’re “finishing” the original while filming the remake), using modern techniques to make it look, sound and feel as it might have back in 1933. The sequence is presented separately from the film, and the faces of the “sailors” who fall to their doom in the pit are recognizable from the documentary (which makes it even more fun), but this is an absolutely loving and thrilling “what if?” tribute that gives us a tantalizing look at what the scene might have been (and is that a “1933-style” version of Lord of the Rings’ Shelob in there?).

A second, hour-long documentary takes a look at the life and career of Cooper, the maverick filmmaker, explorer and adventurer who brought Kong to life, and there’s also some rare test footage from O’Brien’s never-realized Creation project. A collection of trailers for Cooper and Schoedsack’s other films is also included on disc one. The film itself has been meticulously restored, the images looking mostly sharp and often beautiful, despite some wear brought by age and the layering of different celluloid elements in the FX sequences. This is just about the best presentation of King Kong one could hope for, and it not only serves as a respectful, essential edition of an all-time movie classic—not just a genre milestone, but a cinematic one—but builds a bridge between the original and Jackson’s upcoming version.

Kong also has something that so many modern blockbusters lack: heart. From its well-drawn characters (including the big ape himself) to its carefully developed story to the evident, hands-on craftsmanship that went into its production, King Kong is an epic with both a poignant emotional core and a mythic quality that allows it to transcend the limitations of its era. That’s something we see less and less of in today’s by-the-numbers, marketed-to-death spectacles. For all its wonderful qualities, its memories, its sense of wonder and iconic status, we should be more thankful for King Kong than ever.

The Son of Kong, on the other hand, never looks like anything other than what it was: an opportunistic sequel, done quickly and cheaply to capitalize on its predecessor’s success. Thrown together and rushed into theaters only nine months after the first Kong’s premiere, it has an underpopulated feel and a slapdash screenplay (which goes uncredited, with only a story credit given to Cooper’s wife Ruth Rose, who co-scripted Kong and wrote Mighty Joe Young). Worse yet, it’s nearly two-thirds into the film’s 69-minute running time before Little Kong even makes an appearance; “He’s not a patch on his old man,” says Armstrong, returning as Carl Denham, and he’s right. While watching O’Brien’s handiwork (which also includes a styracosaur, a cave bear and a brontosaurian carnivore) is always fun, the junior ape’s antics are too goofy and childlike, more befitting a character from Wallace and Gromit than the heir to one of cinema’s mightiest monsters.

Nonetheless, Warner has bestowed just as much attention on Son of Kong as on its parent, and the black-and-white image is as fine as one could hope for. Understandably, no extras are included on this disc besides a trailer.

Sixteen years after the sequel’s release, a more honorable “son of Kong” hit theaters in the person of “Mr. Joseph Young of Africa,” a.k.a. Mighty Joe Young. A canny revision of the original Kong’s story, Young brings back Denham as an even more showy showman, Max O’Hara, who travels to Africa to bring back lions and other exotic fauna for a safari-themed LA nightclub. What he finds are another beauty and her beast: Jill Young (Terry Moore) and Joe, the towering gorilla she has raised since both were very small. The fast-talking O’Hara convinces Jill to bring Joe to LA, where they become stars, but both soon chafe at the restrictions of fame. When three drunks abuse Joe in his cage, the ape goes on a rampage, leading to one of the most dynamic stop-motion sequences in film history, and ultimately to a climax that would be unswallowably melodramatic were it not for the conviction and skill with which it is put together.

Directed, like Son of Kong, by Schoedsack, Mighty Joe Young features the most fluid animation of an O’Brien ape yet, thanks in large part to the work of animator Harryhausen, here making his feature-film debut. Warner’s transfer is just as good as those of the Kong films (as on the previous laserdisc, a red tint has been added to the climax, with no loss of image clarity), and this disc is heavier on the supplements than Son. A Conversation With Ray Harryhausen and the Chiodo Brothers is a sit-down with the veteran FX master and his three sibling “heirs,” who can barely contain their adulation for Harryhausen and quiz him on a number of Young particulars. “Ninety percent of everything I’ve done has been the first take,” Harryhausen reveals, which is pretty amazing when you think about it—as is a deceptively simple-looking moment in which Joe tips over a lion cage, whose complex particulars are fully explained by the artist. Ray Harryhausen and Mighty Joe Young is essentially a continuation of his technical discussion with the Chiodos, here illustrated with the help of an original Joe armature.

Harryhausen and Ralston reteam on a Young commentary, joined by Moore. While this talk, like Kong’s, isn’t as thorough as the best historical commentaries, it benefits from the inclusion of Moore, who contributes a number of sharp and enthusiastic recollections of her Young experience. She reveals that Schoedsack, also an avid aviator, was virtually blind due to a flight mishap, and points out stuntmen who suffered injuries of their own during some of the film’s more intense moments. On this film, Harryhausen is able to share first-hand details on how the FX were created, as well as point out the odd in-joke (a cop named “Obrinski”) and, along with Ralston, occasionally visible wires and other animation assists. That’s the risk of such a sharp transfer of a vintage film—the clarity reveals such details that went unnoticed in past versions—but in the case of both Young and Kong, it detracts not one bit from the enjoyment of the films themselves.