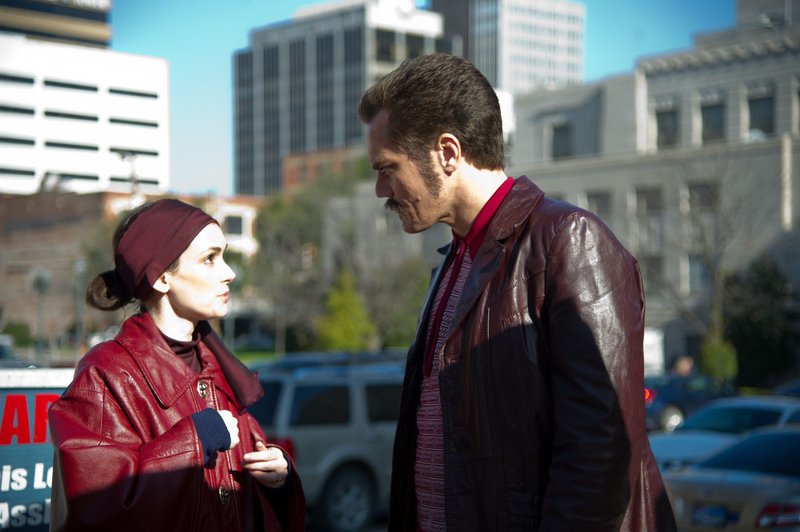 Editor's Note: This was originally published for FANGORIA on May 3, 2013, and we're proud to share it as part of The Gingold Files.

What’s more difficult—playing a devoted family man who’s also a contract killer with over 100 murders under his belt, or portraying his wife, who seems completely unsuspecting about his bloody profession? Rising to both challenges are Michael Shannon and Winona Ryder, stars of the new dramatic thriller The Iceman.

The film is based on the true story of Richard Kuklinski (Shannon), who was organized crime’s deadliest assassin in the New York area from the 1960s through the ’80s. Directed by Ariel Vromen from a script he wrote with Morgan Land, The Iceman balances scenes of grisly mayhem (Kuklinski got that nickname for his habit of keeping his corpses frozen for months before disposing of them, to throw off the authorities) with Kuklinski’s home life with wife Deborah (Ryder) and their two daughters. Vromen, whose credits include the Marisa Tomei-starring supernatural thriller Danika, was first inspired to bring Kuklinski to the big screen after watching a 1992 HBO documentary containing his confessions—material provided to Shannon to prepare for the role.

“I was given an unedited copy of, I believe, the first interview he did for HBO, and it was over 20 hours long,” the actor recalls. “I would sit and watch it by myself, over and over—there were like 10 DVDs. It became a very intimate thing, and I almost started to feel like I was the interviewer, even though I wasn’t asking the questions. I can’t imagine a better way to research a part, really. I started reading one of the books about Kuklinski, but then Ariel told me it wasn’t as accurate as this other book, so then I kind of threw my hands up and said, ‘Well, the truth probably is that all of these books are half-true and half-false.’ And even watching the interview, you’re never quite sure what to believe; he contradicts himself all the time, and there are a lot of things he doesn’t want to talk about.”

It was “the more mundane conversations he had with the interviewer” in the unedited footage, Shannon says, that provided a key to portraying Kuklinski. “One of my favorite bits is when the interviewer asked him, ‘So, do you like sports? Do you watch them?’ He’s like, ‘Nah, I don’t like sports. I’ll watch a baseball game once in a while; I don’t like them.’ ‘Well, you must have free time sometimes—do you have any hobbies?’ He’s like, ‘Nah, I don’t really have any hobbies.’ ‘Well, what do you like to do? What do you enjoy doing?’ He says, ‘Well, I like be at home, and sit in my chair. If I didn’t have to leave the house, I wouldn’t.’ I found that very funny but also very touching, because what I realized was that this is a guy who just wants to be home more than anything. He never really had that when he was a kid, so when he grew up, he tried to create it for himself.”

Ryder notes that she didn’t have the chance to draw from the real-life source, as Kuklinski’s real-life wife (whose name was changed for the movie) was not involved with the production, and there was little existing video of her. “There wasn’t a lot available about her,” Ryder says, noting that when playing an existing person, “Obviously, I usually like to have their blessing and get a chance to talk to them. But I do feel like in this case, she has always stuck to the story that she knew nothing, so I don’t know why she would necessarily want to talk to me.”

Nor did the actress want to immerse herself in those many hours of Kuklinski confessions. “I met with Ariel about a year beforehand, when they were still trying to raise the money, and checked out some of those interviews,” she recalls. “To be honest—and I know it’s different from Michael—I just found them repulsive and disturbing, and I had to turn them off. I had a friend fast-forward to any, like, 40-second clips of his wife talking. And then later, when Ariel asked me to do it, I just knew that having to sit through hours of him talking about, like, shooting people in the face and tying them up and them getting eaten by rats, would not have helped my performance.”

In fact, Ryder admits, she crossed out all the scenes in the Iceman script dealing with Kuklinski’s gruesome crimes, leaving only what Deborah is aware of. Yet she didn’t intend to portray Deborah as completely unaware of the fact that her husband might be up to no good. “People might see her as oblivious, but what I tried to do was play the denial, which was sort of what drew me to the project to begin with—the deep, deep denial that she was living in for so long. We all deal with denial, and it’s a very human thing, but the fact is that she was flourishing on this blood money that I believe she knew was not clean. I don’t know to what extent she knew what he was into, but I do believe it was impossible she didn’t know something. But to acknowledge that would have meant a) bearing some responsibility, and b) leaving with the kids and becoming a single mother. And she liked her life and liked the money and liked living that way, which is really kind of twisted.

“I do not see her as a victim at all,” Ryder continues. “I do believe violence is cyclical, and he obviously grew up terribly abused, but people do overcome it. I do think there was greed. You know, she’s like, ‘You have $30,000 in your pocket, that’s great.’ Who wouldn’t say, ‘Where the hell did you get 30,000 dollars? What’s going on?’ There is a confrontation scene, and I think people actually do that so that later they can justify it: ‘Well, I asked him, and he said…’ ”

This isn’t Shannon’s first time playing a man whose dangerous behavior is at odds with his family life (see his terrific turn in Jeff Nichols’ Take Shelter), or being involved with onscreen gangsters. He won praise and a new level of visibility as Nelson Van Alden, the puritanical Prohibition agent who falls under the sway of the corruption he’s supposed to punish in HBO’s hit series Boardwalk Empire. Shannon sees similarities between Kuklinski and Van Alden, but also significant differences. “They’re both full of self-loathing, basically,” he says. “They have that in common, although Richard doesn’t self-flagellate. I think that in order to be able to desensitize yourself enough to do things like that, you have to have a low opinion of yourself, because one thing that would stop any of us—or most people—from doing those things, beyond just the thought of inflicting harm on another human being, is the idea of the repercussions it would have on your own life. It’s like, ‘What I’m doing right now could ruin my life. I could end up in jail, and everything could be taken away from me.’ And if you don’t care much about yourself, that doesn’t bother you.

“But other than that, I think they’re pretty different people,” he continues. “Van Alden is not a killer. People tend to talk about him like he’s the villain of the show, and I always think, ‘Hmm. Let me see—how many people has Van Alden killed? Two, maybe? How many people has Harrow killed? 50? 60?’ So I don’t really understand it—Van Alden is not, like, a mass murderer. The baptism [in which he drowns a fellow agent] was unfortunate—he just got carried away. And the other thing was his wife’s fault, he just had to finish him off. I never understand when people are like, ‘I hate you so much on Boardwalk Empire—I mean, you’re a great actor, but you’re so evil!’ I’m like, ‘Well, I hate you too!’ ”

Kuklinski, of course, commits onscreen murder with regularity in The Iceman, and Shannon took these moments very seriously. “Any time you’re acting like you’re killing someone, that’s very tricky, because you’re not actually hurting them and nothing’s really happening, yet you want it to have the gravity that that situation would have, and you don’t want it to seem too frivolous, or just ‘like a movie.’ You want it to have the weight it would really have, so you’re not glamorizing it or making it seem fun. That question comes up all the time: ‘How does this influence the culture and young people and such and such?’ I just try to make sure it doesn’t look glamorous.”

Scary as he is on screen in The Iceman, Ryder found Shannon a joy to work with during the shoot in Shreveport, Louisiana. “It was great,” she says, “though it was a bit of an adjustment, because he’s someone who doesn’t like to rehearse. I mean this in a great way: You really don’t know what he’s going to do until the cameras roll. And what that does for me and the other actors is, it pulls you into the moment, and you have to be present. You can prepare for five years, and all that will crumble if you’re not in that moment with the other actor. And the way he works with that spontaneity pulls you in and makes you present, and I really appreciated that.”

Ryder has appeared opposite a few other fearsome characters on screen, like Gary Oldman’s Count in Bram Stoker’s Dracula and the xenomorphs of Alien Resurrection, and recently had a vivid supporting role in Darren Aronofsky’s supernaturally tinged dramatic thriller Black Swan. When asked if she’d like to explore her own dark side and take a villainous turn, she almost lets slip about a project soon to be announced. “Gosh, I wish I could talk about this thing I’m about to do, but I’m not allowed to talk about it yet.” But she adds that she tends to wait until a role speaks to her, rather than pursue a particular type of character. “It has always been this way—I’ve never known until I read it. Black Swan was a very small part, but that was a great little role and I was thrilled that they asked me to do it.”

Meanwhile, Shannon is awaiting the impending release of a film featuring his most conspicuous villain yet: Man of Steel, in which portrays Superman’s archenemy General Zod. Like Ryder, he takes a practical view of the parts he plays, and isn’t concerned about typecasting. “I’m very happy with my career. The onus is not on me to say what I do—all I have to do is do it. If someone else wants to categorize that, it’s their business; I just look at it like, I get a part, I play the part. I don’t feel like my deck is full of twos and threes; I’ve got aces and kings in there, too. I see a lot of variety.”