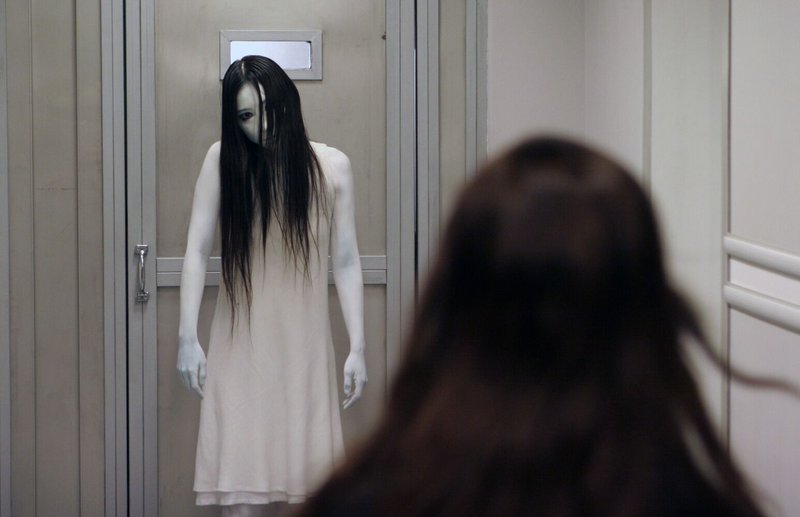 Editor's Note: This was originally published for FANGORIA on May 8, 2009, and we're proud to share it as part of The Gingold Files.

As if any more proof were needed, The Grudge 3—the third in the American series based on Takashi Shimizu’s Japanese screen quartet, the first to go direct to DVD and the first of any of these not helmed by Shimizu—demonstrates that this concept has been well and truly exhausted. Particularly given that this sequel was created not by untried up-and-comers or music-video graduates, but a couple of guys who have shown themselves to have true horror chops.

The Grudge 3 was directed by Toby Wilkins and scripted by Brad Keene, who held those posts respectively on Splinter and From Within, two of the smarter and more satisfying independent fright films to emerge in the last year. Yet even their best efforts are defeated by the necessity of adhering to a formula that has now become familiar well past the point of banality. No matter what the context, or the amount of craft applied, it’s no longer possible to watch little Toshio crouched on his haunches, meowing like a deranged cat, or Kayako looming above/behind a victim or contorting herself across the floor while going “A-a-a-a-a-h-h-h-h-h” and not respond with “Ya-a-a-a-a-awn.”

Perhaps someone who has never seen one of these films before and decides to start with this one might get a little more out of The Grudge 3, though they might be initially lost given the lack of a recap of the events of Grudge 2…which is not to say the movie is light on exposition. We’re back in the Chicago apartment house where Kayako’s curse of anger followed an American who picked it up in Japan, and claimed several victims. Needless to say, new tenants aren’t clamoring to move in, even in the current economy, which is causing problems for young landlord Max (Gil McKinney). He’s already got enough on his plate, what with caring for his sick little sister Rose (Jadie Hobson) as his grown sis Lisa (Johanna E. Braddy) is about to relocate to New York with her boyfriend.

While Rose starts claiming to have seen a strange little boy haunting the building’s halls, a woman named Naoko (Emi Ikehata) arrives from Japan to rent a room, with a special interest in one in particular. Dr. Sullivan (Shawnee Smith), who was caring for young Grudge 2 survivor Jake (Matthew Knight, the only returnee from the past features), also turns up to investigate what went on, as assorted anonymous victims begin dropping—and the rest of the story pretty much writes itself.

Keene makes an admirable attempt to develop real lives for his protagonists, and Wilkins shoots it all with some style (and more blood than previously seen in Grudge-land, giving this the franchise’s first R rating). But it don’t mean a thing if the horror ain’t got that zing, and the supernatural antics of Kayako and Toshio (now played by Aiko Horiuchi and Shimba Tsuchiya) feel as old-hat as the flashbacks explaining why they’re so cheesed off. The acting is generally decent, though the characters’ actions sometimes stretch credibility, and Saw veteran Smith seems to be here more as bait for hardcore horror fans than because her role offers her anything exceptional to do.

Though clearly made on a significantly lower budget than its predecessors, The Grudge 3 looks and sounds professional enough on Sony Pictures’ DVD, sporting a clear and nicely hued 1.85:1 transfer with Dolby Digital 5.1 sound that has ghostly noises coming from all over the room. The extras are limited, consisting of a handful of unremarkable deleted scenes and a pair of featurettes totaling only 15 minutes. The Curse Continues is a standard-issue making-of in which the filmmakers attempt to make a case for this film taking a different tack than its predecessors, in between a lot of reminders that The Grudge 2 is available from Sony Pictures Home Entertainment. It’s here that you’ll also find the scariest moment on the whole disc, when somebody says, “I don’t think we’ve heard the last of Kayako’s ghost.”

Tokyagöaria refers not to our J-counterpart, but to a conglomeration of Tokyo and Chicago, where the movie takes place, and Bulgaria, where it was actually lensed. Here we get a nice sense of how the production team duplicated a Japanese apartment and the previous film’s set in Eastern Europe (with Knight on hand to vouch for the latter’s authenticity), along with glimpses of the filmmakers confronting inclement weather, the language barrier and location-scouting trips that had them dealing with downed trees and locked gates. As fun as this segment is, you know there’s something wrong when the most interesting things a DVD can tell you about a horror movie involve the places where it was filmed.