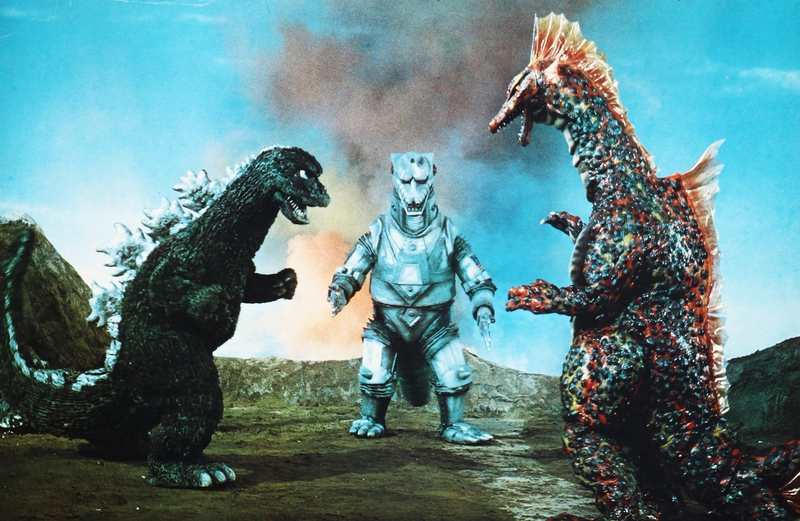 Editor's Note: This was originally published for FANGORIA on November 26, 2007, and we're proud to share it as part of The Gingold Files.

To get the bad news out of the way first: Classic Media/Genius Entertainment’s boxed set forces hardcore Japanfans to double-dip. Two of the DVDs contained herein, All Monsters Attack (a.k.a. Godzilla’s Revenge) and Terror of Mechagodzilla, are available only as part of this package, and it’s likely that most people who’ll want them have already picked up the set’s other titles: the double-disc Gojira, Godzilla Raids Again, Mothra vs. Godzilla (the latter two reviewed in Fango #260), Ghidorah the Three-Headed Monster and Invasion of Astro-Monster (those two reviewed here). Requiring those devotees to shell out the box’s higher price to get the pair of newbies is enough to make one want to knock down a building or two.

On a pure presentation level, the All Monsters and Terror DVDs fully live up to the high standards set by their predecessors, and just like them are enclosed in individual cases inside the box. And the former allows for a reassessment of a movie that, as audio commentator Richard Pusateri notes on his All Monsters track, is often described as either the worst Godzilla movie ever made…or the second worst. Pusateri makes something of a plea for a fresh analysis of the film, and watching All Monsters in the original language emphasizes that longtime franchise director Ishiro Honda and scripter Shinichi Sekizawa attempted something a little different and ambitious here. The story follows little Ichiro (Tomonori Yazaki) as he deals with life as a latchkey kid in an industrial Japanese city, a group of bullies led by the nasty Gabara and eventually a couple of bank robbers on the lam. Ichiro escapes his travails by imagining himself onto Monster Island, where he befriends Minilla, a.k.a. Minya, the son of Godzilla who has problems with his own Gabara, a towering cat-faced beast.

There is something to be said for the way Sekizawa establishes and Honda evokes Ichiro’s loneliness and distance from everyone around him, and how they tap into the empowerment fantasies that their own previous features no doubt represented to a generation of young audiences. One of the key criticisms of the film has regarded the plentiful use of stock footage from Son of Godzilla and Godzilla vs. the Sea Monster for the kaiju scenes—especially given the significant mismatch between the Godzilla suit designs in those two pictures. But since this film’s creatures exist solely in Ichiro’s fantasy world, fueled by watching past movies, it’s arguable that scenes from them would be what he imagines. It is inarguable, though, that the new monster sequences have a chintzy look; Gabara doesn’t even have a tail to offset its man-in-a-suit origins. Further lowering the film in the estimation of U.S. viewers, Minya (who speaks in a child’s tones in the Japanese version, emphasizing his duality with Ichiro) was dubbed in the American Godzilla’s Revenge with a goofy voice sounding rather like Barney the dinosaur.

Beyond the spoken language and a replacement opening-credits musical theme (an improvement in this case), there are no differences between Godzilla’s Revenge and All Monsters Attack, both presented in colorful, superwide Tohoscope on the DVD. Pusateri’s commentary is intermittently interesting, but he spends too much time simply narrating and quipping about the onscreen action and often sounds as if he’s reading from a prepared text. While he dutifully runs through the résumés of practically all the performers involved, he doesn’t share much hard production detail, several times speculating about what he thinks might have occurred on set. In the end, the most surprising revelation he shares is that the lackluster Son of Godzilla outgrossed the spectacular Destroy All Monsters at the Japanese box office.

More spontaneous and informative is the talk track provided by Keith Aiken and Bob Johnson on Terror of Mechagodzilla. Appropriately so, too, since this film—the last of the Big G’s initial run and also Honda’s swan song on the franchise—is a significant improvement on Toho’s other ’70s beast bashes, including its specific predecessor Godzilla vs. Mechagodzilla (a.k.a. Godzilla vs. the Cosmic Monster). Where the previous few films skimped on the city-smashing, Terror boasts a series of vivid destruction setpieces, improved special FX, dynamic scoring by Akira Ifukube—like Honda, a franchise veteran returning after a few films away—as well as a more interesting story (by Yukiko Takayama, a neophyte who won the scripting gig in a studio-sponsored contest and one of the only women to pen a Godzilla film).

Once again, aliens plan to use the towering robotic double to conquer Earth, and take control of the resurrected prehistoric creature Titanosaurus as well. Needless to say, Godzilla has his hands full, and there’s also human drama going on involving Katsura (Tomoko Ai), the cyborg daughter of a scientist who has thrown his lot in with the extraterrestrials. She begins showing glimmers of humanity that may be our only hope in turning the tide of battle in our planet’s favor.

The second Mechagodzilla saw the initial franchise out in style—but in a sadly familiar turn of events, it was badly bowdlerized by its first Stateside distributor, Bob Conn Enterprises. In the interest of landing a G rating to attract a kiddie audience, anything that might have remotely been considered objectionable was sliced out—rather odd, since Conn released the film under the ominous title The Terror of Godzilla. It then hit broadcast TV under the Terror of Mechagodzilla moniker, intact (save a trimmed shot of Katsura’s prosthetic breasts) and with an added prologue (inaccurately) recounting the Big G’s history through clips from past features. Conn’s truncated cut was the one utilized in all previous U.S. video versions, but now both the original Japanese edition and the televised variation can be viewed on the new disc. Both look very fine and are again in Tohoscope widescreen—except for the American montage, which is presented at about 1.66:1. Some of this is matted from images already fullscreened off the originals, resulting in extremely severe cropping.

Aiken and Johnson chart the movie’s bumpy U.S. history and offer plenty more entertaining factoids on their well-researched commentary, with occasional humorous asides along the way. (Noting that Katsura’s cyborg boobs join a glimpse of an adult magazine in a previous Godzilla film as two of the only instances of nudity in the series’ history, one of them cheekily observes that those seeking skin in these movies would have to settle for “paper or plastic.”) The Terror disc also offers a thoughtful featurette on The Women of Godzilla by Steve Ryfle and Ed Godziszewski, the former of whom narrates over a series of rare stills and points out the many diverse roles that these movies offered their actresses.

All Monsters Attack contains a just-the-facts biographical segment on Honda by Godziszewski, which is worth a look for the vintage photos on view. Trailers are promised on the cases for each, but I couldn’t find them on either disc; more pics are offered in annotated galleries on both. The collection on All Monsters is for some reason split up into two sections, and contains one of the oddest kaiju stills I’ve ever seen: Godzilla, Minya and Gabara posed as if in the midst of a musical number!