The Girls Of PLAGUE TOWN 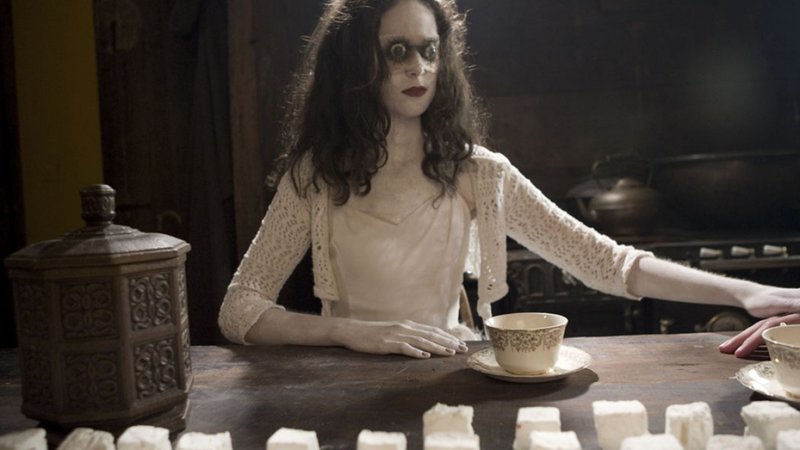 Editor's Note: This was originally published for FANGORIA on May 13, 2009, and we're proud to share it as part of The Gingold Files.

Imperiled heroines struggling to survive, or malevolent forces of youthful evil, their pretty features contorted into visages of horror—such are the casting options most frequently available to young actresses in cinematic fright fare. Plague Town offered both, as a family on vacation in a remote part of Ireland becomes stranded in a village where the local children have deformities on their faces and murder in their hearts.

Fango had the chance to speak to the performers on each side of this equation over the course of a long, eventually chilly night on Plague Town’s Connecticut location. Not surprisingly, a good deal of the interviews take place in a YMCA camp building that has become the production’s makeup HQ, where Josslyn DeCrosta and Erica Rhodes, as sisters Molly and Jessica Monahan, are done up with bloody wounds while an assembly line of youngsters are transformed into the Plague Townies.

“Reading the script, I knew it was going to be gory and gross,” says DeCrosta, who also had a small role as an auditioner in the horror mockumentary Brutal Massacre, “but it has all been done so well. Even my blood has been done in a way that I still look good, so you know these guys [FX artists Tate Steinsiek, Brian Spears and the rest of the crew] know what they’re doing. The effects help everything come alive and make it real for me. They allow me to get into character that much more.”

DeCrosta’s Molly is an introvert with a history of mental difficulties, who’s the first among her brood to be aware of the creepy figures watching them from the shadows. The role is a far cry from the actress’ naturally outgoing personality, and she finds that the part in particular and the script in general (written by debuting director David Gregory and John Cregan) has more to offer than typical youth-oriented genre flicks. “It’s not your regular horror film where young people go off and get killed in the woods,” she notes. “There’s a big story to this that you follow all the way to the end, and I’m lucky to have this kind of role. Molly actually has a lot to her, and a whole arc that she goes through.”

Rhodes makes a similar observation about her part, though older sibling Jessica starts out as 180 degrees removed from her withdrawn sister; their father has taken on a new girlfriend, and Jessica rebels by bringing a fresh squeeze of her own, Brit lad Robin (James Warke), along on this leg of their trip. “I’d say she’s the mirror protagonist,” Rhodes says. “She sort of parallels Molly’s journey, and goes through the same things, except on a different plane. She starts out very bratty, but I believe she becomes likable by the end. She’s a difficult older sister, and at first it seems her relationship with Molly isn’t the strongest, but by the end it has been proven otherwise.”

Having previously appeared on TV in a PBS presentation of A Prairie Home Companion and the reality series Film Fakers, Rhodes admits, “I was definitely not picturing something like this as being my first feature film. It was a surprise, but at the same time, it has been really fun. Not many people get to perform this kind of drama. In some ways, it’s an actor’s dream, because you get to go the furthest you can possibly go in terms of the emotional stakes. It has been really fun.”

Things aren’t so much fun for Molly and Jessica during Plague Town’s second half, as the sisters are subjected to a series of attacks by the twisted youths. Although they’re playing younger, most of the actors enacting the malevolent kids are in their late teens or even a little older. One notable exception is 14-year-old Kate Aspinwall as signature villainess Rosemary; having no eyes of her own, she wears eerie doll’s orbs affixed to a bandage tied around her head. That part of her costume has made this something of a Method role for the first-time actress.

“I can only really see through the bandage when there’s a lot of light in a room,” she explains. “When there isn’t, I just kind of have to feel around.” The late-night shoots, she adds, have helped: “The scenes I’ve done so far, I’ve been so tired that I was kind of groggy and in a fog, so it was easy playing blind.”

In the setpiece being shot tonight, Rosemary leads a group of her “sisters” in pelting a bloodied victim they’ve hung from a tree—via vines through his ruined eye sockets—with sticks and assorted forest detritus. The other girls are played by Kelsey Smith, Amy Fabish, Hope Alexander and Alison Hanlon, who are getting used to performing this kind of mayhem for Gregory’s camera.

“So far, we’ve also done a scene where one of the main actresses was tied to a tree, and we were skipping in a circle around her and whipping her with branches,” Smith says. “It’s interesting to become a totally different person than you really are in normal life. You just have to think evil. Also, the setting helps; when you’re outside in the woods at night and you have that whole effect, you just get into it.”

Fabish reveals that, thanks to the magic of makeup, she’s playing more than one of the Plague Town kids. “I’m a few of ’em,” she says. “The first one was Twisted Figure, where I just got to hide in the woods. The one tonight is Female Attacker 4, and the last one is going to be Nails, who is really, really cool. I can’t wait to play that one; she gets a great killing scene.”

At 22, Fabish is one of the oldest among those limning Plague Town’s villains, which helped win her the multiple roles. “During the casting call,” she notes, “they kept having me come back a few times, so I wasn’t sure which part they wanted me for. I guess they were assuming they would use me for a few different ones, and with the prosthetics, you won’t be able to distinguish that they’re all me.” Getting all her different visages on has been nothing but a joy for the actress. “It’s just so much fun,” she smiles. “It’s a long process, but I love how everything ends up looking. It’s such a transformation; I’ve never seen anything like it. And with everyone wearing it, it’s funny because you forget each other’s faces. We just recognize each other from our [makeup] faces!”

Having lensed a couple of significant confrontations with the youthful ghouls so far, Rhodes says that working with these performers has been a “great” experience. “I feel a little bad,” she adds, “because I haven’t really been able to engage with them too much, since those have been very difficult scenes for me. But they’ve been doing a terrific job. I think some of the cast members were worried at first, because they were like, ‘Little kids attacking us—that’s a bit scary.’ What if they don’t know how to handle a sickle or something like that? But by now we’ve realized that they’re pretty professional, and they’re prepared to do whatever’s necessary. And they’re not playing their real ages; with the makeup and costumes, you can’t tell how old they actually are. You know, most of us are playing different ages than we are—I won’t tell you my real age!” she laughs.

The days and nights spent on Plague Town, she adds, have led the cast—particularly those playing the Monahans—to form a bond. “James was saying that we’ve become sort of a family, which is completely true,” she says. “Josslyn and I have developed a sister-like relationship offscreen, not just on. And when I had a few days off and then James had a few days off, it felt weird, like there was a missing link. The first week, we are all together, staying at the same hotel and around each other pretty much 24/7, and now it has been kind of difficult because we’ve been split up a lot. It definitely changes the dynamic on the set when some of us aren’t here.”