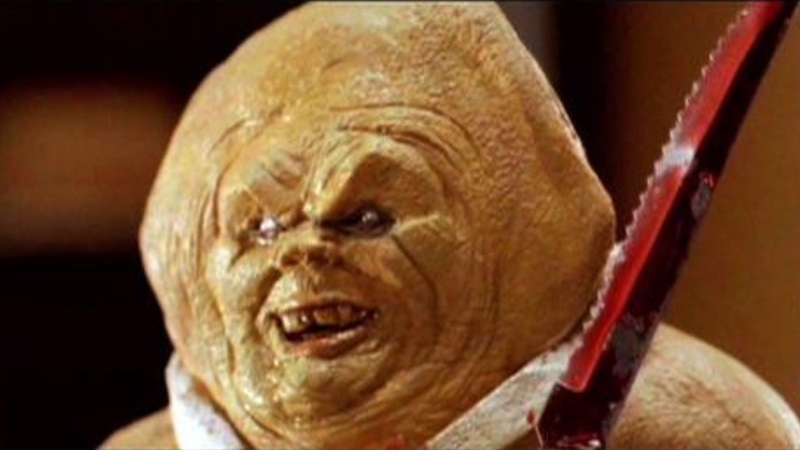 Editor's Note: This was originally published for FANGORIA on November 22, 2005, and we're proud to share it as part of The Gingold Files.

It’s one thing to make a lousy movie out of a decent idea, but it’s quite another to take a concept that should have guaranteed plenty of so-bad-it’s-good fun and drive it straight to dullsville. You’d think that there’d be no way to “screw up” a movie about a marauding, living cookie creature with the voice of Gary Busey, but then you haven’t seen The Gingerdead Man.

Do try to keep it that way. Over the course of only an hour that feels a lot longer, appended by 10 minutes (!) of closing credits, the movie squanders its premise through limited imagination and a clearly even more limited budget. After an opening set in a diner, where vaguely defined villain Millard Findlemeyer (Busey, looking like he doesn’t know what the hell he’s doing here) shoots a couple of members of the Leigh family, the rest of the film is set in and around the bakery run by surviving daughter Sara (get it?) and her alcoholic mom. No sooner have we learned that Findlemeyer was convicted on Sara’s testimony and cremated than some suspicious “gingerbread spices” turn up at the bakery’s door one night. An application of accidentally spilled blood later, a freshly baked and possessed cookie man with Busey’s voice is out of the oven and hungering for vengeance. This leads to several scenes of awkwardly staged mayhem and the characters coming up with one excuse after another not to simply walk out of the bakery and find safety.

There’s a slight spattering of gore, but just as much violence is done to continuity—a character looks out of the building at night to an alley lit up by daylight, a scene of the Gingerdead Man shutting off the bakery’s power cuts to an exterior where the lights are on inside, etc. The cookie monster’s lines never get any cleverer than “It ain’t the fuckin’ Pillsbury Doughboy!” and John Carl Buechler’s creature FX are, to be charitable, somewhat less than convincing. When the film’s hero gets a look at the little terror and says, “You guys saw that thing—it had to be fake,” it’s the most intelligent line of dialogue the movie has to offer.

The 1.85:1 transfer and unidentified sound on Wizard Entertainment/Full Moon’s DVD are no better than they should or have to be, and the supplements are, understandably, fairly limited. There’s a short collection of not terribly funny bloopers, trailers for other Full Moon product (including an upcoming, heretofore unknown quantity called Petrified), a “message” from company topper/Gingerdead producer/director Charles Band and a making-of featurette. In the latter, assorted actors and crew speak of the production with a humor and enthusiasm that seem either touching or misguided, depending on how you look at it, and Buechler is seen working on a human-sized Gingerdead Man creation that, as far as I could tell, never shows up on screen. For his part, Busey proclaims that “Charlie has a unique vision that I’ve never encountered in the 34 years I’ve been making films” and speaks of “the fierce action of aggressivity” in his character. Kidding or not? It’s hard to tell.

Two portions of the doc suggest, directly and indirectly, the movie this might have been. The Gingerdead Man began life as a screenplay by William (Madhouse) Butler, who takes the pseudonym “Silvia St. Croix” on the final feature and whose name, if you’re quick on the Pause button, can be spotted on a script in an actor’s hand. We’re given a look at a teaser for the version Butler planned to direct, with a CGI Gingerdead Man that’s no more convincing than Buechler’s but possesses a lot more energy and attitude. The most telling moment, though, is seen in behind-the-scenes footage, when the shoot is interrupted by a 911 call that sends rescue vehicles right into the middle of the location. And instead of having his cameraman grab some guerrilla footage of them, Band simply sits back and waits for what could have been a bit of extra production value to pass.