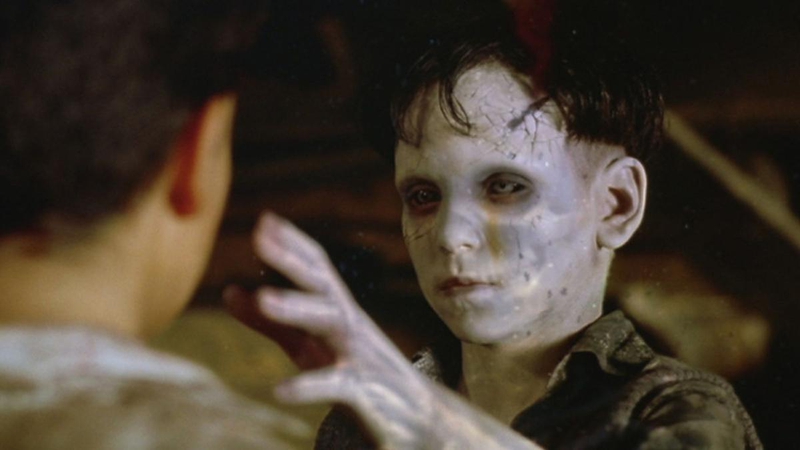 Editor's Note: This was originally published for FANGORIA on November 20, 2001, and we're proud to share it as part of The Gingold Files.

War is hell, but the war and horror movie genres haven’t been crossbred very often, perhaps because each contains enough possibilities for violence and tension that grafting onto the other might be too much, or a distraction. Recently, and no doubt coincidentally (as they geared up before the events of September 11), a surfeit of genre films set during wartime has gone into production, from David Twohy’s WWII submarine chiller Below to the British Dog Soldiers and The Bunker. Arriving on the scene first is Guillermo del Toro’s The Devil’s Backbone, which deals with aforementioned problem by keeping the conflict (in this case the Spanish Civil War) as a backdrop and placing the threat much closer to home.

“Home,” in this case, is an orphanage set in a desert landscape, where young Carlos (Fernando Tielve) arrives. While remote from the fighting, the place has an ever-present reminder of the conflict, in the form of a large unexploded bomb embedded in the courtyard. But Carlos soon finds out that there’s more to fear inside the orphanage walls, as he hears of and then actually encounters the ghost of another young boy that wanders the halls and rooms. Or is the specter really a figure of fright? Like some of the best ghost stories, The Devil’s Backbone suggests that the evil that lurks in the hearts of men is more threatening than any supernatural agent.

As he explicitly states in the film’s opening, del Toro believes a ghost can be many things—not just the shade of a deceased person but a missed opportunity or personal regret. Such concerns hang over many of the characters in Devil’s Backbone, including elderly professor Cásares (a sublime Federico Luppi, from del Toro’s Cronos) and headmistress Carmen (Marisa Paredes). They are sympathetic; caretaker Jacinto (Eduardo Noriega of Open Your Eyes) is not. His own frustrations are expressed in hostility, and as the film goes on, Carlos and the other children will find themselves banding together to fight their own war against this older enemy.

The narrative blending of human conflict and supernatural intrigue (del Toro scripted with Antonio Trashorras and David Muñoz) is at times uneasy, but the director keeps the movie on track with a sure stylistic hand, drenching the film in dread and melancholy. Rather than build toward a defining twist ending in the manner of such recent spookshows as The Sixth Sense and The Others, he builds consistent tension through a credible series of conflicts that eventually explode (by the end literally, though not in the manner you expect) into violence. There is one significant climactic revelation, but del Toro plays the moment more for its tragedy than surprise.

After subordinating some of his personal style in the nonetheless entertaining Mimic, it’s nice to see del Toro return to a more personal project, bolstered by a fine-all-around cast and topnotch technical work. The sun-baked cinematography by regular Robert Rodriguez collaborator Guillermo Navarro and Javier Navarrete’s elegiac score perfectly complement the director’s vision, and the FX (special makeup by DDT and David Martin, CGI by Telson) are among the best seen in a Spanish-language genre film. The work is impactful but never overstated, and once again reflects del Toro’s themes: There’s a strange beauty to the presentation of the ghost, with the most gruesome FX reserved for the images of man’s inhumanity toward man—and child.