Read An Exclusive Excerpt From THE DESPICABLE FANTASIES OF QUENTIN SERGENOV

A sneak peek of the latest novel from Preston Fassel. 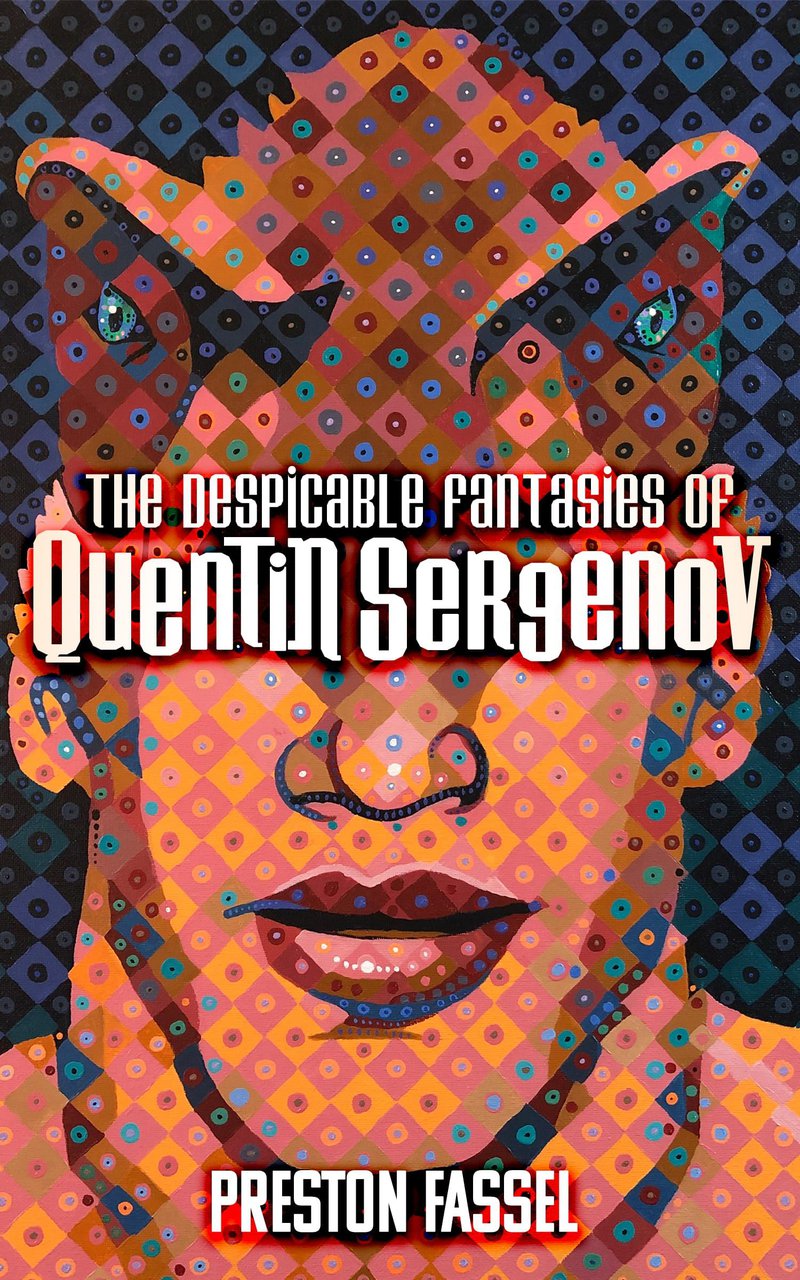 Cover art of THE DESPICABLE FANTASIES OF QUENTIN SERGENOV by Dan Gremminger.

We're pleased to exclusively debut this excerpt from Fango friend Preston Fassel's upcoming book, The Despicable Fantasies of Quentin Sergenov! Fassel had this to say about his work:

Quentin is one of my oldest characters and one that I’ve tried to bring to life for many years. He was born out of all the homophobia my brother and I witnessed growing up.  Some of the most toxic, homophobic guys we knew were also huge pro-wrestling fans, and there seemed to be this cognitive disconnect between their obsessively wanting to avoid anything that gave the appearance of ‘gayness,’ like hugging or outward displays of emotion, and then also sitting in a room for three hours and watching half-naked, oiled up men grappling with one another. I remember one night saying to my brother, ‘What would happen if they found out one of their favorite wrestlers was actually gay?’ And then my mind just started spiraling out from there into this really crazy, off-the-wall story – there’s this wrestler in the '90s, and he’s outed, and he’s blacklisted and kidnapped by Nazi scientists who turn him into a dinosaur. I wanted it to be like what I imagined would happen if Female Trouble-era John Waters made a horror movie. It’s something I’ve revisited over the years, showing it to LGBT friends and readers to get feedback, fine-tuning and tweaking and changing elements based on their feedback to make sure it wasn’t problematic or hurtful to anyone, and it’s finally reached its perfect form. I’m really grateful to Mark Miller and Encyclopocalypse for taking a chance on something so out there, and I hope people have as much fun reading it as I did bringing it to life. In this excerpt, Quentin, newly homeless after being blacklisted from the world of pro-wrestling, finds himself in the middle of a mugging when he first encounters the scientists who’ll change his life.

The book is available in paperback and Kindle on Amazon as of TODAY through Encyclopocalypse Publications. 35% of all proceeds will go to benefit The Trevor Project. Read on for the excerpt!

Quentin had no idea where the van had come from; neither, it seemed, did any of the bums. Certainly, Eunice did not, as the front of the vehicle struck the dog’s body with enough force to cause it to explode, its flesh and innards dissolving mid-air into a viscous mass of muted grays and browns and reds, arcing through the sky to land brutally on the median a good ten feet away.

Quentin and the bums stared in disbelief, at the suddenness of the van’s arrival, at its impeccable timing. It was a vehicle like none of the men had ever seen before; it was white, enormous, with the flat front of a microbus and the modified suspension of a lowrider. The sides and back bore no windows or insignias or identifying marks; where there should have been a license plate there was a blank piece of cardboard attached with duct tape. The windshield was pitch black; the van’s engine produced the bizarre noise Quentin had heard seconds before its arrival, and now, as he stood there studying it, he tried to make out the individual sounds, tiny dings and pops and the constant clamor of metal grinding against metal.

“Holy fuck!” The man in the John Deere cap bellowed. It was the only thing anyone said for what seemed to be a good long time. In another situation, Quentin thought, the men would be drawing weapons and attacking whoever it was that had killed their beloved mascot; but the circumstances presented to them were so foreign, and the van so utterly intimidating, that all of them were helplessly frozen in place.

The back of the van opened up. Sterile, white light rushed out, produced by two rows of fluorescent lights bolted to the interior roof. Silhouetted against the light were a trio of men; at first glance, Quentin believed that he was seeing in the triplicate, the result of shock, perhaps, or the inevitable onset of the DTs; but as his eyes focused, he saw that there were in fact three of them, each one identical to the next. All three had blonde flat-top haircuts; all three wore round, gold rimmed eyeglasses; all three were dressed in matching laboratory coats, white trousers, combat boots, and, most strikingly, red Swastika armbands.

The three men nodded to one another and then turned to regard Quentin and the hobos. Two of them reached into their lab coats and unceremoniously produced MP5 submachine guns, dangling from their shoulders by brown suede straps. The rapidity of the gunfire blended smoothly with the sounds produced by the engine. Round after round tore through the hobos, the guns spewing forth hot lead like the streams from a Summer garden hose, hollow point bullets expanding as they passed through their bodies, leaving their backs blown apart into gaping craters of shattered bone and serrated flesh.

The sight of the last of the hobos hitting the concrete, the remnants of his head softly splatting into a glob vaguely resembling cherry cobbler, was enough to spur Quentin to run. He turned away from the van and darted; the muscles in his legs, long dormant, sprang to life, propelling him forward with awesome force. All of his desire to die, all of his lack of will, vanished. At the basest of levels he still missed Wave, still yearned to be with him once more. Now, though, faced with the prospect of death, each cell in his body, each firing synapse in his brain, seemed to be insisting to him, informing him as if with data gleamed from some holy and secret source, that he could see Wave again, would see Wave again, but in order to do so, he must live.

Two pairs of hands fell on Quentin’s shoulders; the grip they exerted on him was more powerful than any he’d felt in the BCWF, and at once his feet slipped out from beneath him with surprise and pain. Fingers dug into him, pinched the nerves of his shoulders and neck, crippling him with agony. He collapsed to the ground. The tiny, cold steel prongs of a taser punctured his pants and sent hundreds of thousands of volts of paralyzing electricity coursing through his body. Quentin shrieked and writhed; two of his teeth cracked against the sidewalk. When the flow of electricity finally subsided, then came the blows, repeated, heavy swings from expandable steel batons. His body immobilized by the stun gun, Quentin was unable to fend off his attackers; the batons bruised his ribs, blacked an eye, reduced his septum to pulp. He wondered if perhaps someone had identified him at the soup kitchen, if this was about bragging rights, about a group of men so hateful and loathsome as to want to be able to claim credit for killing a famous queer.

“Enough.” The voice was deep, an eloquent bellow, crisp English spoken with an Austrian accent. “Load him into the van.”

The blows stopped; a second later, gloved hands were gripping Quentin’s body, and he felt himself being lifted, up towards the now black night sky, up towards the stars and the Heavens and all the glorious peace they offered him.