The Color Of Horror: 5 Horror Films With Excellent Use Of Color

From Argento red to Aster yellow, we're diving into a world of color. 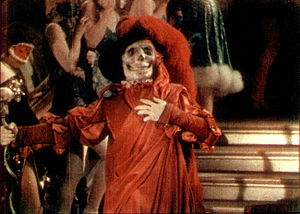 From the rich, crimson blood reminiscent of tin can paint staining the crisp white peasant blouse of a Hammer Horror virgin, to the luminescent neon green ooze filling the vials of an unhinged scientist's workbench as he attempts to resurrect the dead, color in horror is of the utmost importance. Since its minimalist inclusion in The Phantom of the Opera (1925) color has been utilized to convey both the obvious and the metaphorical texts behind the film.

Filmmakers employ the use of color theory in film to portray a particular atmosphere or message, whether that be a character's state of mind, a sense of danger or serenity, or to highlight and emphasize a particular object or person. Working from the color wheel, a filmmaker may choose to use different schemes according to what they wish to convey. A discordant color scheme uses a clashing color to emphasize a particular object. Using a complementary color scheme in film, i.e., a primary and its opposing secondary color, brings a striking visual communication to the color palette. An analogous color scheme is the use of colors next to each other on the color wheel and creates a harmonious atmosphere in the film, whereas a triadic color scheme is the selection of three very different colors, causing them all to be visually striking.

Here are five horror films that utilize color theory to its full potential, manipulating the audiences through the conjuring of unconscious emotions. The unique and remarkable color schemes of each of these films act as a manipulation tactic to guide the audience members toward the filmmaker's true intentions. Through the harmonious use of color theory, cinematography, costume, and art design, the filmmaker can create foreshadowing, impending doom, and feelings of dread. 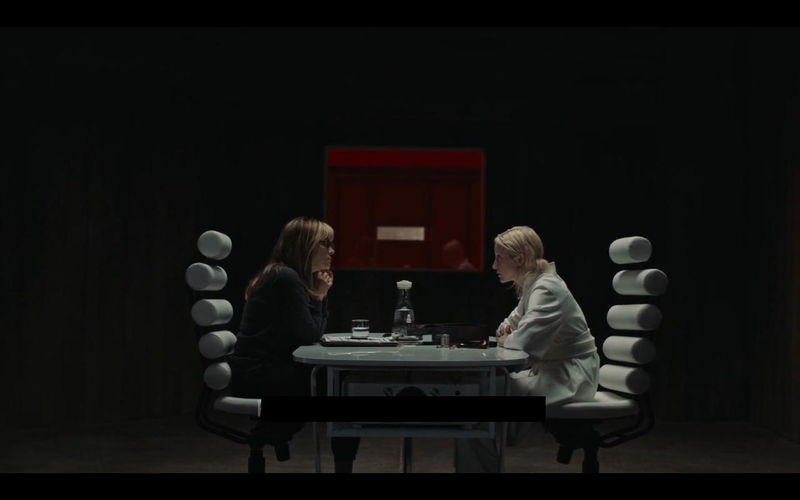 Starring Andrea Riseborough as Tasya Vos, an assassin who possesses the bodies of others in order to carry out her hits. The loss of control over her personal family life begins to affect her work as she struggles to maintain the possession of her current intention, Tate. Cronenberg's commentary on the effects of capitalism on workers' rights, bodily autonomy, and gender politics in the working environment, as well as the misuse of technology, is made extra poignant through his use of the triadic color scheme throughout the film. Possessor's triadic color scheme consists of the three primary colors – red, white, and blue, with an extra addition of white. The yellow throughout the movie represents the primary character's personhood. It depicts Tasya Vos' characteristics of deceit, covertness, and her imminent devolution into insanity. Blue is used in reality scenes and represents truth, security, and honesty, mainly seen with Tate. Red is utilized when Tasya and Tate fight for the power over Tate's body, signifying the aggressive dissociation between the two characters. White for scenes where Tasya is in the company of her employers represents their cold and sterile environment, with a nod to the belief in some Eastern cultures that white symbolizes death and rebirth. 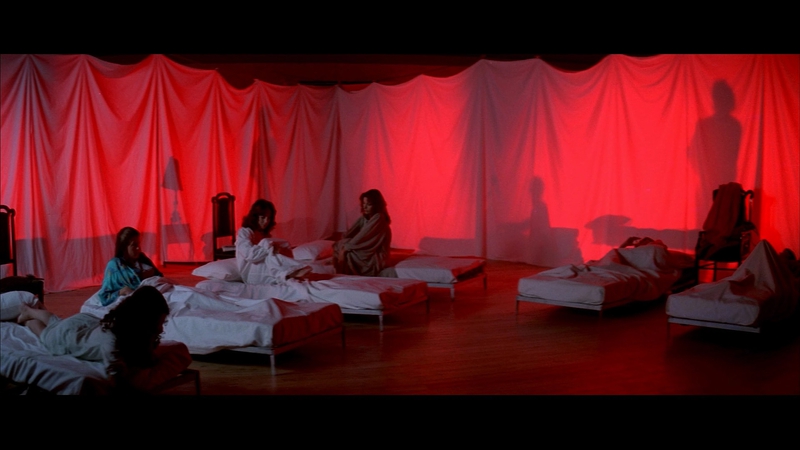 Inspired by Disney's Snow White and The Sevens Dwarves (1937) and the German expressionist horror films of the 1920s, Suspiria tells the story of Suzy Bannion, who has traveled to Germany to study at a prestigious dance school. As her time progresses in the dance academy, Suzy begins to experience a dark underbelly controlled by an unknown supernatural force. To create the most vibrant colors possible within the film, Dario Argento chose to use the three-strip color process previously used in The Wizard of Oz from 1939. Famously, Suspiria's use of the color red permeates nearly every scene. From the makeup, to the exterior and interior walls of the academy itself, as well as the use of backlighting which casts a prominent red hue over the setting. The color red becomes almost a character in itself, foreshadowing the danger that Suzy will soon find and the passion and bloodlust that drives the academy's dark forces. Set against powerful greens and blues, the primary red color palette creates a psychedelic and mind-bending atmosphere, sending signals of unease and imbalance. 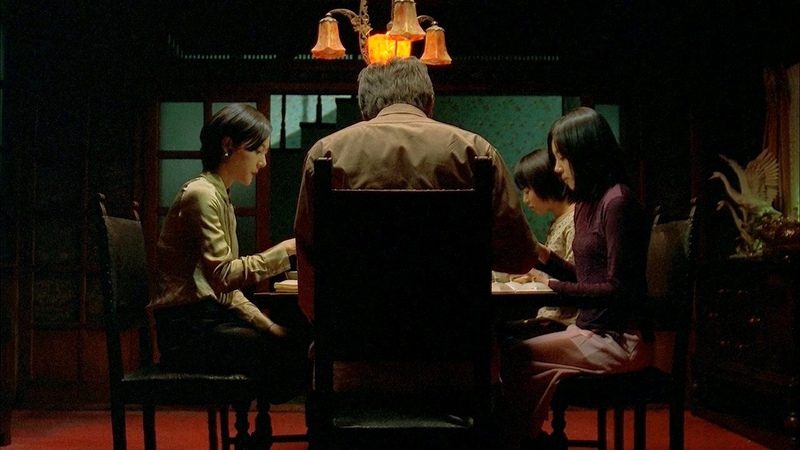 A dark and gothic tale of shame and guilt centers on two sisters Su-mi and Su-yeon, as they grapple with the death of their mother followed by their father's marriage to the often cold stepmother Eun-joo. The central location of the film is the center of the house, the dining room and kitchen. Here, the rooms are rich with green and red — a complementary color scheme- creating an atmosphere of violence, monstrosity, and rot. This represents the situations, both psychological and supernatural, experienced in these rooms. The parents' bedroom is bathed in violet hues, which represents mystery and falsehood, whilst Su-mi's bedclothes are deep blue, which suggests that she is surrounded by sadness and melancholy. The use of color in A Tale of Two Sisters acts as a method of foreshadowing, warning of its possible outcome and ultimate reveal. 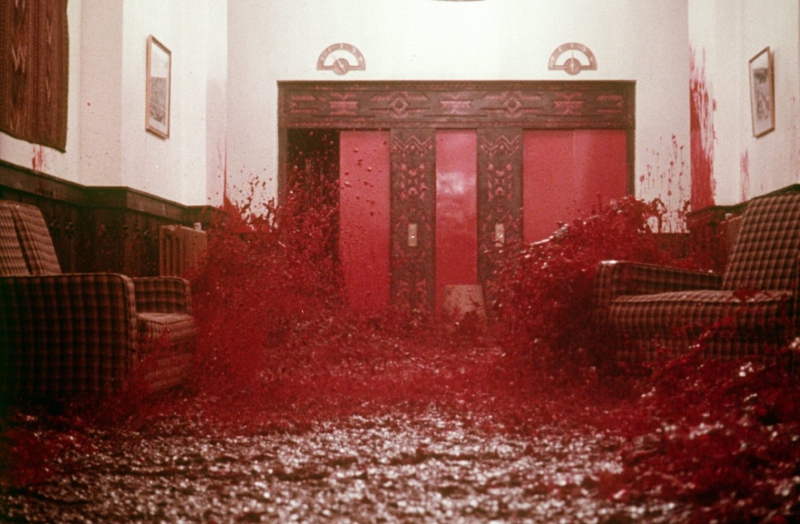 The infamous adaptation of the Stephen King novel follows Jack Torrance as he moves his family to the Overlook Hotel to perform off-season caretaker duties during its closure through the winter. As isolation and cabin fever begins to set in, Jack's pre-existing psychological conditions are exacerbated, putting his wife and young son in extreme danger. Everyone knows about Kubrick's obsession with minute detail in his films, and his use of color theory throughout The Shining is no exception. Just like Argento's Suspiria, The Shining's primary color throughout is red. The color appears in varying shades in costumes, bright and vibrant for Wendy and Danny, darker tones for Jack, and the decor of the hotel itself. Perhaps the most striking use of red is in both the communal bathroom scene between Jack Torrance and Delbert Grady and the infamous elevator blood scene. In the bathroom scene, the red decor is intense and unsettling, representing the downfall of Jack's last shred of sanity and the oncoming danger as Grady tells him he must put his wife and child back in line. Another room that stands out in the Overlook Hotel with its use of colorful decor is another bathroom. This time in room 237. As Jack enters the bright mint green room, where a beautiful naked woman is waiting for him, a certain feeling of uneasiness and the uncanny is visually communicated to the audience. The usage of green in this scene represents the actual decay concealed in this bathroom. 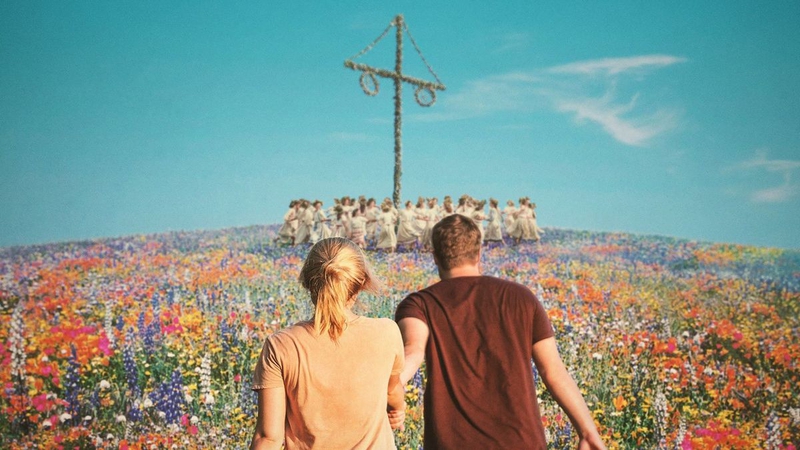 Despite being set in broad daylight, Ari Aster creates a creeping sense of dread and inevitability throughout his foray into folk horror. Even though yellow is generally thought of as a warm and inviting color, and its inclusion in a film about Swedish midsummer festivities is obvious, the deeper subtext behind its meaning is a warning. The color of fire, the yellow objects used throughout this film foreshadow the fiery conclusion. The yellow flowers that line the pathways as Dani and her group are welcomed into the cult camp symbolize the path to danger and a warning of foul occurrences once they step over the threshold. Images of the bright yellow temple are prominent throughout the group's stay at the camp, becoming a symbol of the trickery and deception they will soon experience at the hand of the religious cult. Red is another color of importance in Midsommar. Like many horror films, red represents blood and lifeforce. This is mainly signified through the depiction of menstrual blood,the tapestry hanging in the cult's living quarters, and the wearing of blood-red lipstick and vestments by Maja after her sexual encounter with Dani's boyfriend Christian. It signifies the transference of power through life and death.