Oz Perkins' film uses Satanism as a lens for rejecting the ideas of man. 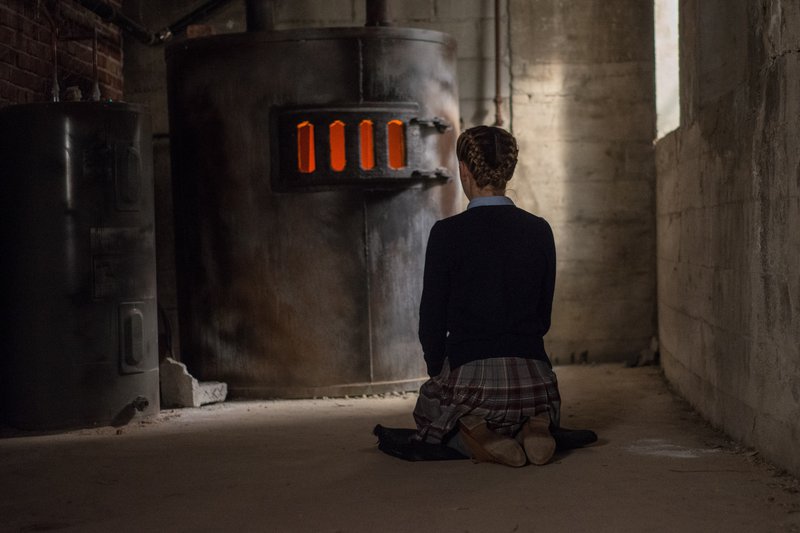 Kiernan Shipka in THE BLACKCOAT'S DAUGHTER (2015)
Powered by JustWatch

Hail Satan! Now that I have your attention, it’s a hot topic in today’s horror film landscape. From the folk roots depiction in a film like The Witch to over-the-top depictions such as the latest Conjuring film, there’s absolutely no shortage of media today that takes a crack at the phenomena that caused such a panic in the ‘80s and beyond. What lies at the roots of this phenomena? Why is the modern horror filmmaking landscape so obsessed with the intentions and worship of the dark lord? The answer is simple. Satanism, like it or not, is used as a metaphor for deeper meanings and intents in the modern context. One recent film that effectively uses Satanism in a broader context is The Blackcoat’s Daughter.

Released in 2015, The Blackcoat’s Daughter was directed by Oz Perkins and stars Emma Roberts as Joan, Keirnan Shipka (before Chilling Adventures of Sabrina fame) as Katherine, and Lucy Boynton as Rose. The film follows Katherine and Rose as they’re left behind at their Catholic boarding school over winter break. Rose lied to her parents about the break so that she could avoid telling them about her hidden pregnancy. Right off the bat the film establishes that one of the girls has broken one of the cardinal rules of Catholicism: having a child out of wedlock. The fact that she’s pregnant and lying about it not only shows her having disregard for her religious upbringing but can also be seen as her taking control over her body.

Growing up a strict Roman Catholic, I was always taught to suppress ideals and lifestyle choices that the church deemed “abnormal.” For example, I always struggled with my gender identity in my former years, and whenever I questioned it I was told to essentially “pray” it away, to atone for my sins and “impure” thoughts. From this experience it’s easy to understand Rose’s plight and the lengths she goes to keep her pregnancy a secret for fear of backlash.

Katherine, on the other hand, has a premonition of her parents being the victim of a fatal car accident while en route to her. This can be perceived as a blasphemous spin on recovering a vision from God. Visions in biblical times were believed to be bestowed upon those worthy of prophecy, usually consisting of destruction or great change. Going to a Catholic school, Katherine’s first instinct is to believe said vision so she starts to panic at the impending demise of her parents, not realizing that these visions are not from God or the higher power she believes, but from a darker place.

Katherine proceeds to hear disturbing voices and comes into contact with a dark entity. Through the early (and sometimes later) history of the Catholic Church, mental health issues have been mistaken for demonic possession and other extraordinary circumstances. Rather than seek outside help back in the day, it was encouraged to take care of the issues within the confines  of the church using rituals such as exorcisms. I have personally seen so much mental illness go undiagnosed and then portrayed as retribution for past transgressions, and The Blackcoat’s Daughter doesn’t shy away from the possibility that this is the case here. Kat soon receives instructions from the dark entity to murder everyone at her school, all while the school receives news that Kat’s parents have indeed died in a car accident.

In what is arguably one of the most pivotal scenes of the movie, Rose finds Kat on her knees in front of the furnace in the school’s basement. It’s up for debate what Rose sees here, but it looks as if Kat is prostrating herself, a massive sin in the eyes of the church. The Furnace acts as the twisted altar for the darkness, providing an antithesis for the traditional Catholic altar used for practice of the religion and going against the fundamental Christian belief that you shall worship “no false idols.” By this time Kat is completely lost, believing herself to be in tune with the dark deity she has been “worshipping.” When Rose confronts her about her strange behavior, Kat states that she knows her parents are dead and starts convulsing. It remains unbeknownst to the viewer if she’s truly the victim of demonic possession or mental illness.

The next day at breakfast, Kat starts violently yelling obscenities and getting vehemently ill. After the school receives word that her parents are gone, they send her out to shovel snow, where all breaks loose, and she decides to murder the nuns and Rose, and sacrifice their heads to the deity at the furnace. The police walk in as she exclaims, “Hail Satan!” and we cut to 9 years later.

Kat has escaped from the mental institution where she has been subjected to exorcism and other unknown means of therapy. Going by the name of “Joan” she is quickly picked up by Rose’s parents who are on their way to the school. They visit it every year in memory of her. Finding her way to the school, she kills Rose’s parents and offers them to the furnace deity, asking it not to go. Realizing she’s fully alone, she begins to break down and cry.

She found solace in the darkness. Satanism in The Blackcoat’s Daughter is portrayed in two ways: firstly in the idea of rejecting most man-made religions and secondly as something to take comfort in. One of the founding principles of Satanism through the ages has been the rejection of the ideas and limitations of man placed upon them by the church. Rose having to hide her pregnancy is a prime example of the church posing limitations on its congregation. Likewise Kat being diagnosed as “possessed” rather than mentally ill is the church actively doing more harm than good. In a way, the film makes the argument that “Satanism” was trying to break these girls away from the ideas and brainwashing of man and religion.

When Kat goes back to the school as Joan to offer more sacrifices to the deity, nothing happens. Absolutely nothing at all. Since she was a child she was made to believe she was possessed or in communication with a demon, and the revelation is that she never was. There was no demon. No possession. Just a sick girl who truly needed help but was left entirely alone. Sometimes we’re led to believe that religion will save or protect us, when in actuality we need to take our own action to get past a hardship or obstacle in life. Things are at the ending as they were in the beginning; we have only ourselves. The Blackcoat’s Daughter may not be an anti-religion anthem, and it may not portray Satanism in an accurate way. But in a sea of movies that use pentagrams and goat’s heads, The Blackcoat’s Daughter stands above the rest by using Satanism to actually say something worthwhile. Hail Satan indeed.