THE ABOMINABLE DR. PHIBES At 50

Five decades in, one of Vincent Price's best roles endures – and inspires. 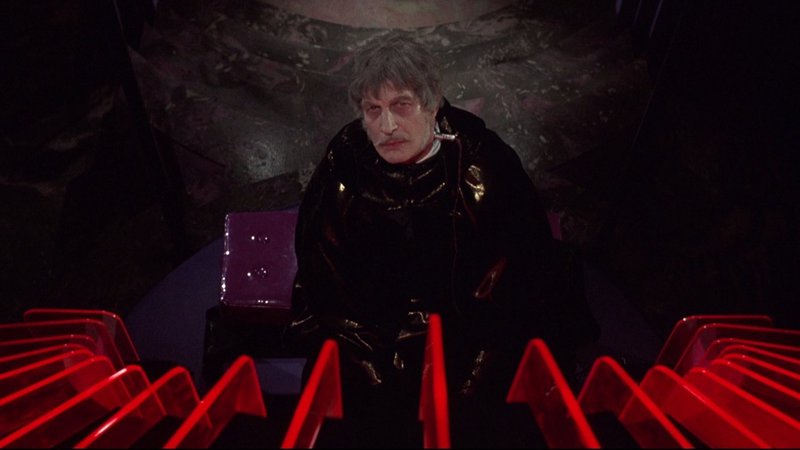 “She was a tall, attractive young lady. She didn’t speak much, as I remember, but she was…”

Fifty years and nine eternities in doom later, The Abominable Dr. Phibes, Robert Fuest’s magnificently gruesome art deco horror comedy, remains in fashion. No passage of time could rob the film of its abiding style and cultural impact; the moldy old chestnut that “they don’t make them like this anymore” remains, in the case of Phibes, fundamentally true. The question isn’t whether or not movies like this could secure funding today, or an audience, or impress critics enough to maintain a coveted 90%+ score on Rotten Tomatoes. The reality is that horror, as a genre and as an industry, has moved on from the era that birthed The Abominable Dr. Phibes, in which an aesthetic confluence existed with the macabre and the flamboyant crossing streams.

People like elevating horror in 2021. That’s a code word for stripping horror of all that makes horror worth watching in the first place, from grimy dread to indulgent sets and costumes and, perhaps most of all, performances. Clamor rose over an Oscar nod for Toni Collette’s work in Hereditary, declared “the best of her career,” “astonishingly good” and “staggering” by critics who, having ignored horror as a genre of note, suddenly became horror journalists after the 2010s’ cresting wave of excellence brought them to the realization that horror is Good, Actually. Horror, of course, has been Good, Actually, for well over a century and change, more if one considers horror literature as horror cinema’s sire. Collette’s acting in Hereditary echoes a narrow definition of what these people consider “acting,” like Baudelaire having the last word on the craft in SNL’s “Master Thespian.”

Good? Maybe. But in horror, “good” comprises a broad range of techniques and approaches, from Collette to Emily Mortimer in Relic to Essie Davis in The Babadook to Vincent Price, the legend, playing Dr. Phibes with the gravity only a person with Price’s background could: poise, dignity, menace and venom, topped off with flashes of playful humor here or there to remind viewers that horror, even at its grisliest, is supposed to be fun. Dr. Phibes is having fun. It stands to reason that Price, too, is having fun. We should all be having fun. Granted, Dr. Phibes’ idea of fun is serial murder. It’s his pastime. His passion, his calling, is the organ, an instrument he commands with ardor and great skill, supplemented by his immense knowledge of musical theory and theology. These are not the implements of a killer, but that’s what makes Phibes such an unlikely culprit in the hideous deaths of seven doctors and a nurse. No one suspects the organist.

The matter of his death is more important, of course, because dead men neither tell tales nor slay the living. But Phibes isn’t dead, just very badly burned and smothered in cakey makeup to disguise his skeletal mug. So he goes about undetected, knocking off the doctors under whose hands his wife, Victoria, died on the operating table, patterning their deaths after the Ten Plagues of Egypt. His plans are elaborate, his methods precise. One step out of place and his schemes might fall apart or otherwise call attention to themselves. But luck, expertise, and plot armor couple with the staple horror trope of police incompetence, and Phibes succeeds in his vengeful, bloody quest.

Boil away the names and narrative specifics, and you’re essentially describing the Saw movies. By happy accident, The Abominable Dr. Phibes turns 50 just days after the release of Spiral, Darren Lynn Bousman’s attempt at resuscitating the splatter franchise about four years after the brothers Spierig closed the books on it. Slashers never die. Neither does lucrative IP. Even The Abominable Dr. Phibes spawned one sequel, 1972's Dr. Phibes Rises Again, but the followup lacks the deranged invention of the original. The same can’t be said of the Saw films, which over the course of thirteen years continued to find new and ingenious ways of slowly, torturously killing people, whether by injecting them with acid, tearing asunder their ribcages, incinerating them inside of brazen bulls, or spiralizing them. Give the series credit for this: its authors never suffered from want of creative carnage.

Neither does The Abominable Dr. Phibes, which sics rats and bats and locusts on unsuspecting and arguably innocent medical professionals, and at one point uses a catapult to impale a man on a brass unicorn horn. Saw isn’t strictly theological, though John Kramer (Tobin Bell) does carry himself with a good bit of Biblical pretense; he’s a do-gooder in his own eyes, correcting moral and social ills by transgressing against the transgressors. Occasionally, these include the people either involved in misdiagnosing his cancer or responsible for his wife Jill’s (Betsy Russell) miscarriage. Mostly, Kramer’s motives are impersonal, where Phibes’ are strictly personal. Their methods remain the same: complicated nearly to the point of comedy, which suits The Abominable Dr. Phibes’ tone but clangs against Saw’s.

Still, the influence of Phibes on arguably the most important horror franchise of the 2000s lingers over the first eight chapters in the newly-minted “book” of Saw. Without Price, Fuest, art director Bernard Reeves and set designer Brian Eatwell, would Saw exist, at least as we know it today? These movies draw as much inspiration from Rube Goldberg as 1970s horror cinema, but the elements of improbability and virtuousness both read strictly as influenced by The Abominable Dr. Phibes. The movie serves as an antecedent to movies embraced in the 1990s, too, like Seven and Urban Legend, which similarly center on theme-driven murders: the seven deadly sins and urban legends, in case you haven’t seen the movies or can’t make a deduction based on their titles.

Unlike Saw, movies of Seven and Urban Legend’s make and model, where killing sprees find an origin in varying cultural touchstones, are no longer in vogue. Slashers are out, for one thing, though we’re quite possibly on the cusp of a new age of slashers thanks in part to the efforts of Christopher Landon, singlehandedly reviving that classic niche with films like Happy Death Day and especially Freaky. For another, this was never an especially popular sub-niche in the first place. Seven isn’t even a consensus horror film, depending on who you talk to, and there aren’t many horror pictures out there that capitalize on, say, nursery rhymes as packaging for gnarly kills. Amazingly, The Abominable Dr. Phibes has managed to occupy a unique place for half a century in a genre where riffing, borrowing and straight-up stealing material is commonplace.

Maybe cribbing from Price is just a bridge too far for some. Maybe no one wants to mess with perfection. But Saw’s DNA shares much in common with Phibes’, and as long as movies like it remain cornerstones of modern horror, then The Abominable Dr. Phibes will endure; should they go out of style, it’ll simply bide its time out of sight and out of mind, waiting for a chance to emerge and commit acts of ghastly violence anew.