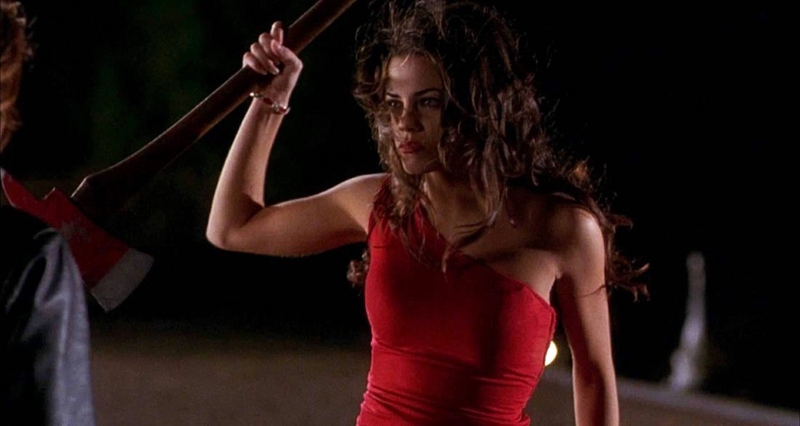 Editor's Note: This was originally published for FANGORIA on January 26, 2006, and we're proud to share it as part of The Gingold Files.

It will, of course, be difficult for many seasoned horror fans to look at the basics of Tamara and not think of Carrie. After all, it’s a high-school horror movie named after a central female character who is put-upon by her classmates until she eventually wreaks gruesome revenge upon them. But Tamara wrings enough changes on the formula, in terms of both story and character, to establish its own identity and emerge as a satisfying youth shocker. Not the least of the differences is that, as opposed to the largely withdrawn and dressed-down Carrie White, Tamara (Jenna Dewan) metes out her payback after coming back from the grave as the sexiest living dead girl you’ll see this year.

But that’s getting ahead of myself. Though she certainly fits the bill as a seductive vixen of vengeance, the stunning Dewan is also convincing as the Tamara we meet in the earlier scenes, who is clearly good-looking but also palpably insecure, and harbors a secret crush on teacher Mr. Natolly (Matthew Marsden). When she misinterprets his attempts to reach out to her as a reciprocation of her affections, her feelings become known to a clique of jocks who are already upset with Tamara for writing a school-newspaper exposé of steroid use among their ranks. They use the knowledge to set her up for a motel-room humiliation and, for good measure, arrange for a couple of the only students sympathetic to Tamara to witness it. In time-honored genre tradition, the prank goes horribly awry and results in Tamara’s death—but that only sets the stage for her to return, thanks to her side hobby of dabbling in witchcraft.

What additionally helps set Tamara apart from its teen-horror/revenge brethren is the fact that its antiheroine doesn’t come back as a simple killing machine. She returns to school all smiles and looking striking, and the movie builds a nice tension out of the fact that no one but the small band of perpetrators knows that she’s supposed to be dead. Nor does Tamara predictably use her newfound hottitude to simply seduce her enemies to their deaths; she has also been empowered with the supernatural ability to influence people’s actions, and begins to turn her betrayers against each other and, in the most memorable grisly setpiece, themselves. At the same time, she embarks on a newly emboldened quest for Mr. Natolly’s attentions, which means that his wife Sheila (Claudette Mink) becomes another candidate for Tamara’s hit list.

While continuing the penchant for outré death sequences he first explored in his original script for Final Destination, screenwriter Jeffrey Reddick aims to ground the story in emotion, and he and director Jeremy Haft are mostly successful in pulling it off. Neither the dialogue nor the performances condescend to the teenage characters, and the capable young cast is highlighted by Dewan, who makes Tamara as convincingly threatening as she is alluring, while maintaining an undercurrent of sympathy. In fact, Tamara’s approach of getting revenge long-distance becomes a liability in the second half, as she’s offscreen for too-long periods at a time. Once she takes center stage again, there’s also one of those unfortunate sequences, familiar from Halloween II and so many others, that takes place in a hospital where the staff all make themselves scarce just in time for the action to heat up.

Tamara rallies in its concluding scenes, though, with an ending that brings both the narrative and emotional concerns full circle, and points up the fact that where its antiheroine is concerned, the killings are really a secondary issue. While those scenes are pulled off with flair (and, refreshingly, without CGI; Doug Morrow’s makeup FX are good and squirm-inducing), the movie doesn’t lose sight of the fact that you’re supposed to feel for Tamara even as she’s indulging in the nastiest of deeds. And in that, at least, the film does indeed warrant the Carrie comparisons.