Tamar Ouziel On The FX Of AFFLICTED 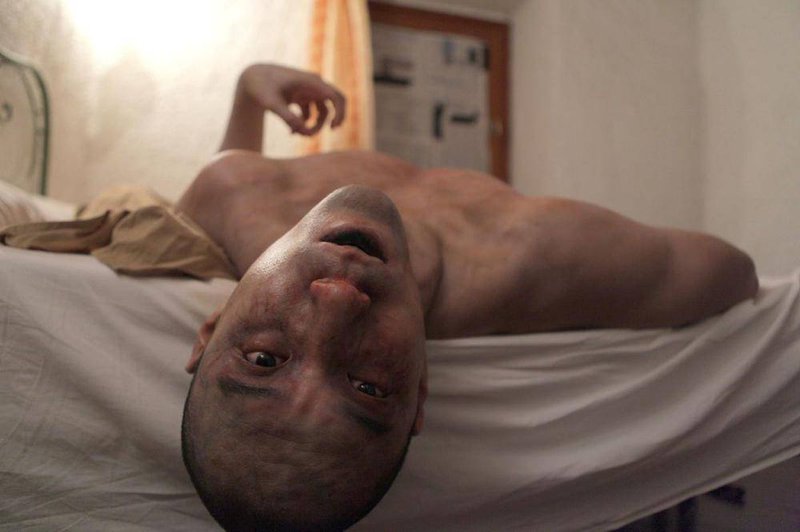 Editor's Note: This was originally published for FANGORIA on April 8, 2014, and we're proud to share it as part of The Gingold Files.

Clif Prowse and Derek Lee’s Afflicted is an especially energetic horror movie with a wide locational canvas. Crucial to its impact are the makeup FX contributions of Tamar Ouziel, who recalls her experiences on the international shoot.

Writer/directors Prowse and Lee also star in the film as Clif and Derek, close friends who set out on a globetrotting vacation. As we watch through their cameras, an assignation with a mysterious woman in Paris leaves Lee suffering a strange malady that gives him heightened strength but also a thirst for blood, and a deteriorating physical condition. The effects of that illness, along with plenty of gore gags, are impressively executed by Ouziel, especially given that she had to whip them up on far-flung locations around the world while maintaining the realism required by the found-footage format.

Tell us a bit about your background, and how you came to be involved with Afflicted.

I’ve been doing makeup for over 15 years, working in the TV and film industry in Vancouver. I connected with the Afflicted team through friends, and here was a group of young guys who needed somebody who kind of knew what they were doing. We all became buddies who believed in a really good script and a really good idea.

Had you worked on any horror or found-footage movies before?

I hadn’t worked on any found-footage projects, but I have done some independent horror, and TV shows in Vancouver that have involved science-fiction and creature stuff. I did the first season of Supernatural, and a bunch of others over the years as well.

When you first heard the concept of Afflicted, did you think it would be a particular challenge for your talents?

I did, first because it was going to be completely on location, in foreign countries where people didn’t necessarily speak English, and we would be shooting with the 5D and I had never really worked with that camera before, so I didn’t know how things would look. But I was very lucky, because we got to do a lot of camera tests and figure things out. We were going with such a small package, literally the camera and a couple of lights; I think I had more gear than any other department, to be honest. Yeah, it was a little worrisome at first, but the guys had a strong vision, and with the makeup tests on top of that, we kind of knew what we were doing by the time we left for Europe; we just didn’t know what we were in for location-wise.

Did this project require a particular amount of preparation, since you might not be able to get the necessary materials on location?

Absolutely. We didn’t know if we could find the products we needed, there was the language barrier and some of the locations were quite remote, so I really had to bring everything with me, almost including the kitchen sink. We smuggled in a couple of little bottles of 99 percent alcohol until we found out what they used in Italy to activate Skin Illustrator, because they don’t sell those products there. I just prepared two massive suitcases [laughs], and schlepped them all the way over.

As far as the progression of Lee’s makeup, how much of that was shot in sequence, and what was the process of developing his look as it evolves over the course of the story?

We didn’t shoot the film in sequence, just because we were on location and had to shoot what was happening in those specific places. On each day, though, we would try and shoot in sequence, just because it was such a small crew, and we were using available light. We had to go from healthy to sick, and kind of build on top of that, so that made things a lot easier, and we would have only one cleanup at the end of the night. There were a couple of days where we had to bounce back and forth, but just for Derek’s sake and his skin’s sake, we tried to limit the amount of on and off, on and off.

We wanted it to look like the bite gave him a weird disease or something like that, so we tried to make him look sickly and gaunt, with the sweats and him not being able to eat properly, getting more and more hollowed out with weird rashes. It kind of became a process from the inside out, and that was something that was set in advance, like in the very first version of the script, and the boys were quite adamant about it. Then on the shooting days, we realized that we had to bump it up a little bit, because realism is great, but when you’re making a genre movie, you kind of have to go further and give it a little bit more scare power or gore or fantasy.

Before we left, I contacted an amazing local lens tech named Marcine, who made Derek’s contacts based on the description we requested and did a tutorial with Derek and myself. For the goop directly on the eye, we used a polysporine made specifically for that purpose, and on top of that I used thicker gel eyedrops. I had to do a lot of research and talk extensively with Marcine and an eye doctor about what I could and could not use around the eyes.

How was it staging some of the messier moments in public areas—the restaurant scene, for example?

Oh, those were really fun. We shot twice in some locations, and we built up a great rapport with the locals and they were really keen on helping us. For the vomiting scene, we used a compression tank, which had two bladders, so to speak, inside; we filled one with air and one with vomit. I had to practice with Derek so I could match my hand movements on the release valve with his actions. The vomit itself was minestrone and pea soup mixed with spaghetti bits.

The hardest part of that gag was carrying this massive tank in a Pelican Case all the way up. I don’t know if you’re familiar with Cinque Terra or northern Italy, but there are lots of stairs [laughs], and it’s not like North America, where we have movie trucks or whatever. A lot of the time, the whole crew was carrying things by foot, so those were the hardest things to do. There was also a trolley we had to take up the cliffside (pictured below). We were shooting either off-season or just at the end of the season, so we managed to find locations that had just closed down or were willing to help us out, because we were regular customers, so it was quite easy—except for the carrying part [laughs].

Did you hire any locals to help out on any of the more complex scenes?

I was really lucky; I was able to bring an assistant with me part-time, and in France, I was able to hire a local lady to help out on some of the stuff we shot there. But otherwise, it was pretty much me by myself, and I was really lucky; it was a very small crew, so we were all helping each other—like the sound mixer would hold my palettes for me when I was applying the paints. The second time around I was able to bring my assistant more full-time, a wonderful lady named Frida Norrman, and that helped a lot. Mike Nickiforek also helped me with the sculpting and moldmaking, and Frank Ippolito lent me some molds for the blisters.

Were you able to improvise anything as you were going along, or did it all have to be planned out, given the nature of the production?

We did have to improvise, because there are only so many camera tests you can do in one part of the world when you’re going to be in another, knowing the geographic differences that would affect the lighting; we used a lot of available light. So once we were there, we had to do some tweaks on things, and because it was very low-budget and I didn’t have a makeup trailer, we did a lot of things kind of old-school. Most of the effects were predominantly paint; the burns were bondo transfers we had made, and we used old-school stipple latex, just because we didn’t have modern conveniences, so to speak. That’s pretty much the best way to describe the experience: using current techniques with a lot of old-school flair. We had to make our blood from scratch, due to the quantities we needed and cost restraints. Yay Karo syrup, instant coffee and food coloring!

Did you know in advance which of the gags would rely on computer enhancement later?

We found out closer to the shooting. So once we were in Italy, we knew more about, for example, how the burns were going to be effected. So with those, I knew I was doing the before and after, and the CGI would create the transition. For the head being blown out, I knew what I basically had to provide for that, which was great, and everything else, I found out a little bit after the fact, like the veins pulsing and so on. Originally, we didn’t know how much of a budget we would have for CGI, so I had to go in with the fine details there and pray for the best.

What was the most challenging effect or sequence, especially given the way the movie was shot?

The most challenging? Really, when you’re doing everything freehand. There was one night when the actual effect itself was not difficult, but the application was, because we were in a vineyard on a cliffside in Italy with only one real power source, so we were all sharing power, and I had a flashlight in my mouth and this little makeshift makeup mirror we had built when we got there. Trying to do makeup in a little pup tent on a cliffside in the middle of the night was probably the most challenging thing I’ve ever experienced; it was very guerrilla, but it was also the most fun. It was kind of like camping; we were boiling water, sharing one electrical outlet, and I had to get an assistant that day who made sure everything was warm. We had a little heater going in our little tent, trying to make sure you wouldn’t see edges, using the flashlight at different angles to make sure the makeup was camera-ready.