Wild Women With Steak Knives: TALE OF A VAMPIRE 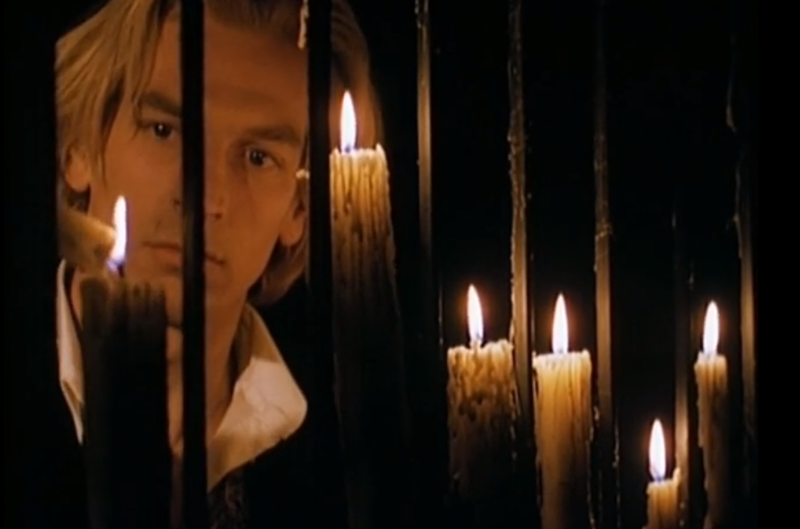 There’s a very specific generation of us that caught Julian Sands’ career somewhere as it bridged wholesome take-your-grandma-to-the-cinema historical dramas à la James Ivory's Oscar-winning A Room with a View, before taking a turn towards decidedly murkier genre territory which – while not the only area he would work in – have remained my personal favorites and those of many others. Sands would up the dark ante as he increasingly appeared in unwaveringly enigmatic films that he was already drawn to like Ken Russell's gloriously demented Gothic, later appearing in movies including Steve Miner’s 1989 film Warlock and its 1993 sequel, Jennifer Lynch's unfairly maligned Boxing Helena, and Dario Argento's straight-up kooky 1998 reimagining of The Phantom of the Opera. To his immense credit, Sands reached peak creep very recently – which is saying something for someone with a filmography of this caliber – with the dubious accomplishment of being the most horrible, vicious character in Václav Marhoul's 2019 screen adaptation of Jerzy Kosiński's grueling novel The Painted Bird. Sands is up against some stiff competition in this film, and yet manages to put in the most repulsive performance amongst a cast of genuinely monstrous figures.

Obviously Sands has worked in a range of other kinds of films, but The Painted Bird is a great (if somewhat stomach-churning) reminder that he has not forgotten just how truly gifted he is at playing really horrible men. There’s something so cloying and so passive aggressive about his particular brand of creep that it really stands in striking contrast against the more stereotypical hyper-masculinity that marks shitty men in film more generally. Traveling back to Shimako Satō’s Tale of a Vampire from 1992, we find – again – that Sands does not disappoint on the disturbing weird guy front.

In Tale of a Vampire, drinking blood and the whole soulless vampire thing the film’s title references is actually one of the least disturbing things that Sand’s undead character Alex gets up to. On the surface, he’s a seemingly gentle soul who spends the bulk of his time in a charmingly antiquated library where he is researching his PhD thesis on religious martyrs. It is here that his paths cross with Jane (played by Suzanna Hamilton, who starred in such bleak bangers as Michael Radford’s 1984 where she plays John Hurt’s partner-in-sexcrime, and Dennis Potter's gloriously perverse teleplay Brimstone and Treacle alongside a tremendously sleazy Sting). But, it seems, Alex and Jane’s paths may have crossed before, or at least he seems to think so: she is the spitting image of his lost true love Virginia who he met, er, when she was a child and their romance blossomed into her adulthood. Feel free to read that last sentence again if your creep-o-meter hasn’t already kicked into overdrive.

But Jane has her own problems. She too has suffered a loss (but with a far less pedophilic backstory) and – mere mortal that she is – she chooses to just move on, rather than take Alex’s decidedly more obsessive route. Convinced that there remains some fundamental link between his lost Virginia and librarian Jane, Alex increasingly loses his ability to be a high-functioning urban vampire with the arrival of a mysterious third figure into the scenario. With this unexpected spanner in the works, Alex’s comfortable, centuries-long existence as a heartbroken-yet-enduring member of the undead comes under real threat.

Tale of a Vampire marks a fascinating moment in the career of its director, Japanese filmmaker Shimako Satō. She is known primarily for her work on the popular Eko Eko Azarak horror franchise which were inspired by Shinichi Koga’s manga, helming both Eko Eko Azarak: Wizard of Darkness in 1995 and Eko Eko Azarak II: Birth of the Wizard in 1996 before she left the series that would go on to have another four additions. She still works in horror in various capacities, although her career has expanded much more broadly from her directorial roots; outside of working on a number of Resident Evil video games, she also wrote the script for the supernatural romance Ghost (Tarô Ohtani, 2010), and directed an episode of the J-horror series Tales of Terror.

Tale of a Vampire was Satō’s debut film, and if the heavy British accents and locations don’t give away that this was very much a UK production, then the heavy fetishization of London fog and rain (not to mention all things deliciously twee like tea and libraries) make it hard to miss. Although born in Japan and studying at the Asagaya College of Art and Design, it was when Satō left for the United Kingdom to study at the London Film School that the opportunity arose for her to make her first feature, which she both wrote and directed. The film thus is dripping with a range of internal tensions that manifest within the film itself in really curious, captivating ways: it is both a vision of then-contemporary London seen through the eyes of a Japanese filmmaker, and simultaneously a film about a sexually disturbed man told through the eyes of a woman filmmaker.

While we should reject any suggestion that the latter means Satō was tethered by her gender alone to make any certain “type” of horror film – please, let’s be a little more respectful to the individual creativity of the filmmaker than that! – it is notable in this film just how much of a pervert Alex is framed as, both explicitly and implicitly. There is, again, the whole thing about Virginia being a little girl when their relationship began, and the film seems to consciously avoid revealing the precise age she was when that relationship was consummated. And while the sexualization of vampire attack scenes is hardly new or original, Satō brings an undisguised determination to frame these as scenes of sexual assault, so much so that it’s almost difficult to call it a rape metaphor. In these scenes, the text is the subtext.

Watching from a contemporary perspective, it’s hard to escape just how of its time Tale of a Vampire is – from Jane’s fashion (those divine shoulder pads!) to the overzealous soundtrack (are they synth pan pipes I hear?), there are probably calendars from 1992 less aesthetically dated than this movie. But bookended as it is by a voiceover reading from Edgar Allan Poe’s final finished poem Annabel Lee, there is something about this film that – almost despite itself – contradictorily feels entirely out of time while simultaneously of it. Satō dwells heavily on her central library setting and it would be easy to mistake this as an attempt to gain a bit of highbrow ambience, but the privileging of Poe’s poem is where she might really be showing her hand; there’s much more going on here on the literary front than we perhaps might first credit her with. The final significance of Poe allows a re-reading of Tale of a Vampire that starts leaning slightly more towards literary adaptation than we might initially think. But even beyond such explicit connections, Satō’s debut feature remains an intriguing slice of retro gothic camp.