Take A Seat: 5 Horror Films Centered Around The Dinner Table

Dinner parties to die for.

We've all been there before. We get invited to a dinner party, whether amongst friends, family, or colleagues and are consequently subjected to hours of awkwardness around the table. Maybe it's arguments between guests that we're forced to witness, an obnoxious over-sharer seated next to us, or a meal that is less than appetizing. Whatever the case may be, it's an irrefutable fact that, despite the best intentions of the host, dinner parties can sometimes be a recipe for disaster. 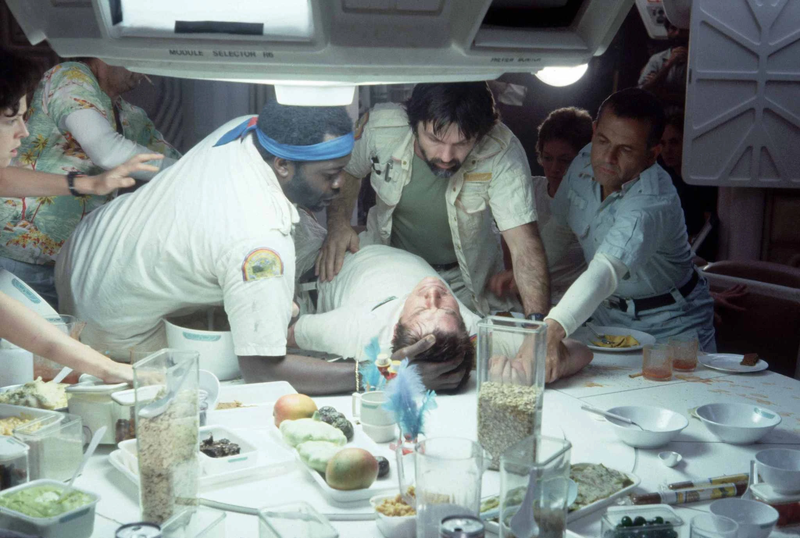 We're really only referring to one scene in particular with this movie, but it's easily one of the most iconic, not just in horror but all of cinema. We're talking, of course, about the chestburster scene. Crew members of the Nostromo sit down to have a meal together in a tension-filled situation after a face-hugging alien attacks executive Officer Kane (John Hurt). The relief that came with the Face Hugger removing itself from Kane's face (and thus allowing the crew to believe it was dead) is short-lived, though, when he begins convulsing and seizing. As they attempt to help him, another alien bursts from his chest, running off into the ship's bowels. The scene is renowned not only for its shocking unpredictability but also for its groundbreaking practical effects. First-time viewers weren't the only ones surprised by the sudden shock of what happened to poor Kane: most of the cast was also famously unaware. Director Ridley Scott wanted genuine reactions of terror and was tight-lipped with actors Sigourney Weaver, Veronica Cartwright, and Yaphet Kotto on the exact details of the scene. Real organs from a butcher's shop were used for authenticity. The resulting explosion of real meat mixed with stage blood all over the unsuspecting cast members has gone down in the annals of movie-making history. The unfortunate crew of the Nostromo never did get to have that relaxing dinner together, and their unwelcome guest remains one of the most talked about in horror to this day. 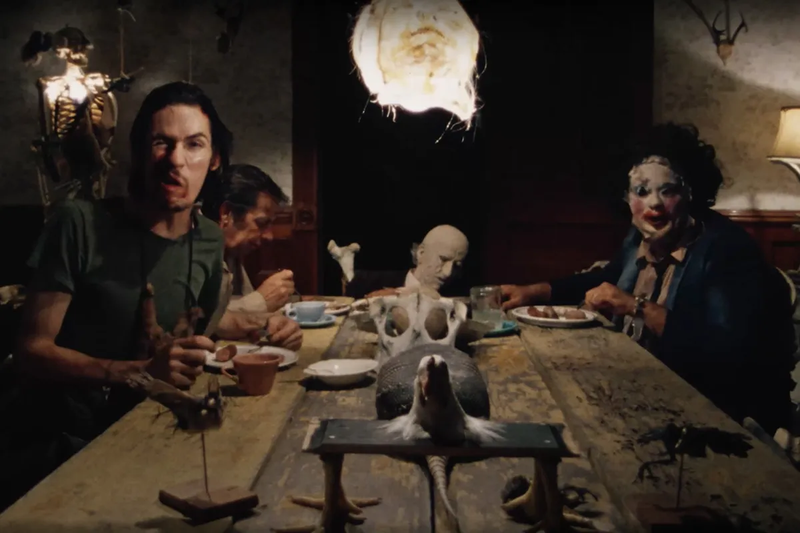 Tobe Hooper's 1974 classic is well known for its disturbing content, which is part of what makes it so iconic. In terms of overall depravity, the dinner scene involving Leatherface and family and Sally's (Marilyn Burns) subsequent torture definitely tops the list. Already despondent over her failed attempt at escape, Sally is seated at a table full of rotting meat while the family gleefully terrorizes her. The sight of Grandpa (John Dugan) taking joy in sucking blood from her finger and his feeble attempts to hit her over the head with a hammer is stomach-churning, to say the least. Filming the scene wasn't a picnic, either. The movie is often noted for its miserable conditions, which pitted cast and crew against punishing heat and excessively long shooting days. The worst of which occurred during the making of this sequence. It reportedly took over 20 hours to shoot, and the stench of the rotting meat mixed with triple-digit temperatures made for an absolutely wretched experience for all involved. When the prop wouldn't work correctly, Burns' finger was cut by Dugan during the scene with Grandpa. It wasn't until years later that Burns discovered this was a purposeful act by Dugan and not an accidental one as she was originally led to believe. Though it's unfortunate that the crew had to go through what they did to capture those moments around the dinner table, the distressing execution can't be denied. It's enough to turn even the most iron stomachs away from meat, not to mention derelict old houses in the country. 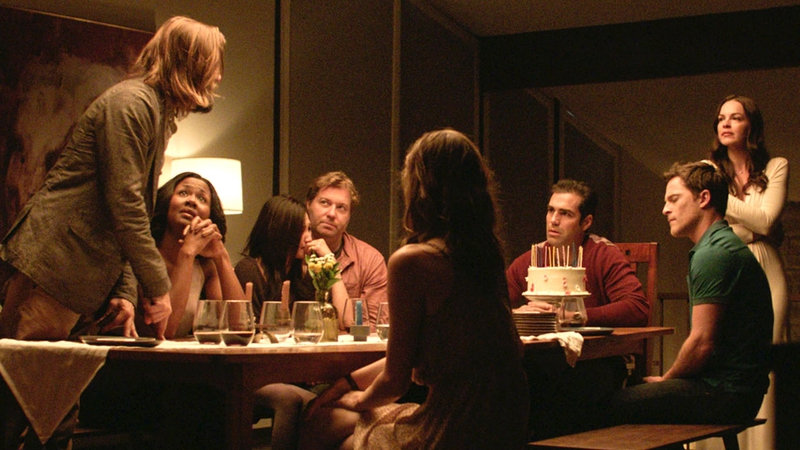 While the first two entries in this list center around particular moments at the dinner table, The Invitation gives the audience an entire movie about a true dinner party from hell. Will (Logan Marshall-Green) and girlfriend Kira (Emayatazy Corinealdi) accept an invitation from his ex-wife Eden and her new partner to attend a party at their former home, along with various other friends and acquaintances. As if that isn't awkward enough, Eden soon reveals she's joined a cult-like group whose purpose is to help those suffering from tragedy work through their grief. From there, the night goes from erratic to dangerous to all-out chaos as guests are forced to fight for their lives against the ill-intended hosts. It may not have the overall shock factor and disgust that Alien and The Texas Chain Saw Massacre offer, but it excels at slow-burn tension building. The resulting paranoia of not knowing who to trust, let alone what's about to happen next, makes this a scenario you're thankful you weren't invited to. 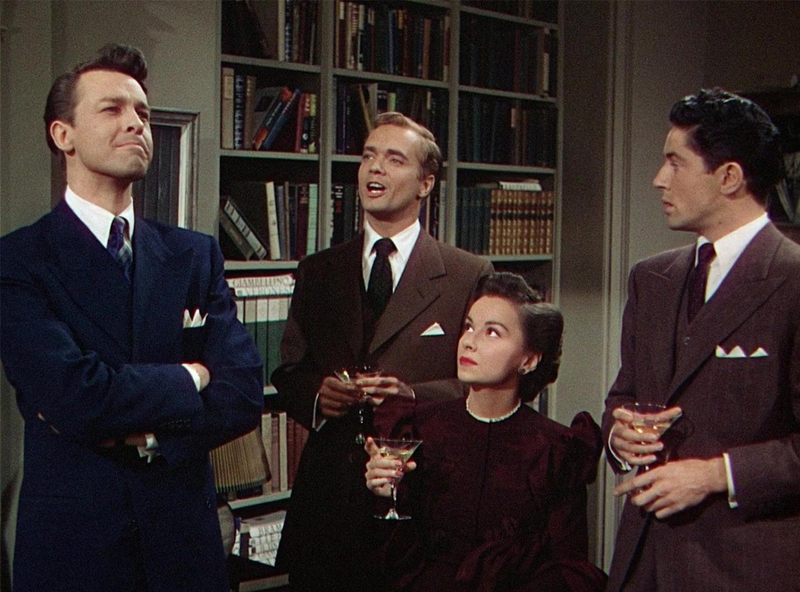 Alfred Hitchcock was always heralded for his craft at combining psychological thrillers with genuine frights, and while 1948's Rope may not be his most famous work, it definitely fits well into both categories. It features one of the most chilling motives for a murder ever seen in film: killing someone simply for the sake of creating the perfect crime. Prep school alums Brandon and Phillip strangle their former classmate David with a rope in what they call an "intellectual exercise" to prove their superiority in creating the perfect murder. They then stuff his body into a large wooden chest and hold a dinner party, including family members and friends of the victim, using the chest as a buffet table. As the night goes on, suspicions arise among the guests, who are tipped off by Brandon and Phillip's odd behavior, proving that they aren't nearly as intelligent as they believe. It's a disquieting premise to know that those closest to the victim were unknowingly subjected to being in the presence of his body.

This 2011 slasher about a family reunion that quickly turns into an orchestrated attempt to kill everyone off to collect a large inheritance may not be the most original plot, but it will definitely keep you on your toes. The film starts the action off almost immediately during dinner when one of the characters is impaled with a crossbow bolt through the window. From there, this quickly becomes a non-stop assault on nearly every character as they fight for survival against assailants donning animal masks. This may only truly involve one section involving the dinner table, but the shock of that poor unsuspecting attendee suddenly getting impaled through the head makes this a memorable entry.