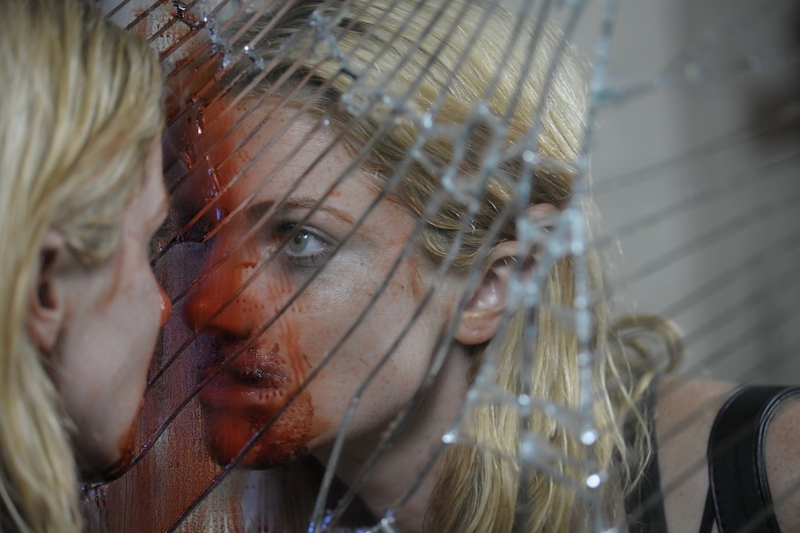 Editor's Note: This was originally published for FANGORIA on May 16, 2014, and we're proud to share it as part of The Gingold Files.

A consumer advisory: The title of SX_Tape amounts to a bait-and-switch, as the sexy stuff proves to only be a small element of the story. The bulk is yet another paranormal-asylum flick that’s not so hot.

It’s also yet another vérité-style horror movie that begins at the end, as heroine Jill (Caitlyn Folley) is interviewed by a detective—essentially revealing up front who will and won’t survive the movie to follow, and putting a big dent in the suspense. Why do so many found-footage filmmakers do this? Is it because they don’t think audiences will have the patience to start at the benign beginning without a bit of drama leading it off, or is it just a convenient way to have someone explain the handheld approach at the outset (“They found the camera…”)?

Whatever the case, we then jump back several days to find Jill in happier times with her camcorder-toting, almost-never-seen boyfriend Adam (Ian Duncan). She’s a free-spirited artist who paints nudes based on photos of friends, has no compunctions about doffing all her own clothes in front of her apartment window and, yes, briefly gets it on with Adam while he keeps rolling. Adam, in fact, has a penchant for capturing assorted misbehavior on tape, though his adventurousness fails him when he drives Jill to an abandoned medical facility that he thinks might make a good locale for one of her exhibitions. This place, known as the Vergerus Institute on screen, is played by LA’s Linda Vista Hospital, which has been used for this purpose so many times that just once, I’d like to see a movie in which a camera crew goes in to investigate it, only to be tormented by another camera crew there for the same purpose.

Despite the building’s ominous appearance and “No Trespassing” signs, Jill enthusiastically sets out to find a way in, while Adam stands outside hemming and hawing about whether to follow her for way too long, which pretty much sets the tone for the rest of SX_Tape. Far too much running time is spent unproductively exploring or anxiously running through the Vergerus Institute’s dilapidated, detritus-strewn hallways, while funny noises echo from somewhere in the distance. Yes, the place is haunted, though we only see one ghost, whose first appearance sets in motion a plot development that’s pretty obvious from the outset, but which the movie treats like a mystery.

Vergerus was a place where women who came to deal with unwanted pregnancies were imprisoned and tortured, and with its overall emphasis on the male gaze at women, SX_Tape appears to be heading into an intriguing exploration of the objectification of the female sex, but Eric Reese’s script never follows through. Nor does it do much with the idea of a privileged-acting white couple intruding into a relic in a lower-class neighborhood, which is especially disappointing coming from director Bernard Rose, who so grippingly engaged similar material with Candyman. But beyond such aesthetic concerns, the bottom line is that SX_Tape is never very scary; it was made two years ago, but even then its fear tactics would have seemed too familiar, and its pacing too slack, to get the blood chilling.

The biggest groan involves a development about halfway through (which I guess merits a SPOILER ALERT for this paragraph) which could have sent the movie into an interesting new direction but instead propels it into a ludicrous one. After becoming sufficiently freaked out within Vergerus, Jill and Adam decide sticking around is a bad idea and actually manage to successfully get outside. They escape just in time to see their car being towed off, so Jill calls her friend Ellie (Diana García) for a ride, and Ellie soon arrives with her boyfriend Bobby (Chris Coy). And then, despite everything that’s happened to Jill and Adam, and even though Jill’s car got taken away and there’s a group of angry-looking dudes hanging out across the street, the group decides to leave Ellie’s car there and head back into Vergerus for another go-round.

Bobby winds up going all alpha-male, and Jill responds to his come-ons, which also promises something out of the handheld-horror ordinary, yet SX_Tape winds up settling quickly back into the same old rhythms. While a climactic development does offer a little more justification for the title, the movie proceeds to a pair of closing scenes that carry a high WTF factor, and come off like desperate attempts to add intrigue and shock value to the generic proceedings. “I hate being called predictable,” Adam says not too long into the movie, but even by that point it’s already too late.