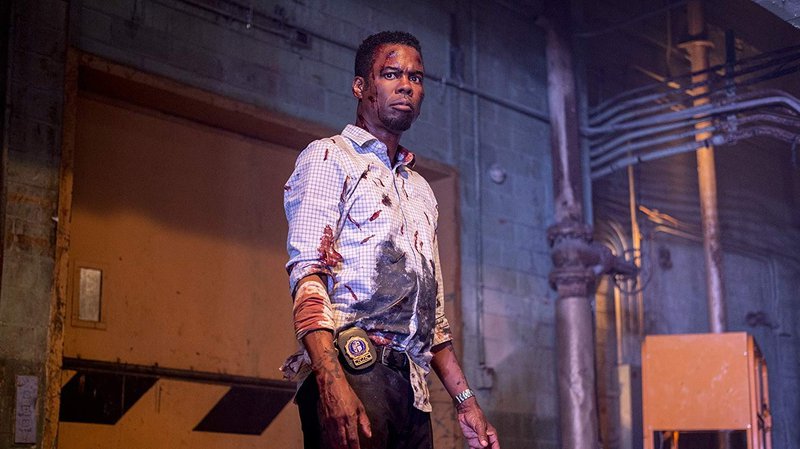 Chris Rock in SPIRAL: FROM THE BOOK OF SAW.

“This is going to go sideways fast.”

Spiral: From the Book of Saw filled out a solid nine pages in our April 2020 issue of FANGORIA, a pretty good indicator of how excited we all were by the first entry in the Saw franchise in some years and the return of franchise steward Darren Lynn Bousman for the first time in over a decade. We all know what happened next: COVID-19 hit, theaters across the world closed their doors and Hollywood revised its release schedule for the first of many, many times related to the pandemic.

Well, nature is healing and all that, because today we got an excellent trailer for Spiral: From the Book of Saw, featuring starring turns from Chris Rock (who also conceived of the story concept, how cool is that?) and Samuel L. Jackson.

In that April 2020 issue, Bousman wrote a piece illuminating how he was brought back to the franchise he helped shape, and how Chris Rock – who until now has been best known for his comedy – got onboard.

“As I understand it, Chris had a concept for a new Saw and talked to Lionsgate about it, and they really liked it and said, ‘We’ve got to let you talk to [producers] Mark [Burg] and Oren [Koules] about this.’ So they got together and Chris introduced them to this concept, and the next thing they did was bring in Josh Stolberg and Pete Goldfinger, the two screenwriters.”

The director goes on to say that Rock was involved in every step of the process, and it was Bousman’s “first time collaborating with someone of his caliber.” He calls Rock “a true fan of horror” who “really knows the movies” and “is such a fan of the franchise that he would reference obscure things I did in my sequels, and I would have to stop and think, ‘Wait, what’s he talking about? Oh shit, he’s talking about this scene in Saw III!’”

Hearing all of that – a franchise reinvigorated by both a fresh perspective and by true fans of the series at once – has me more excited for a Saw movie than I’ve been in a long time.

(You can read more of Bousman’s insights and plenty more Spiral goodness in Vol 2. Issue 7.)

Spiral: From the Book of Saw opens May 14 (almost definitely!). Here’s the synopsis:

A criminal mastermind unleashes a twisted form of justice in Spiral, the terrifying new chapter from the book of Saw. Working in the shadow of his father, an esteemed police veteran (Samuel L. Jackson), brash Detective Ezekiel “Zeke” Banks (Chris Rock) and his rookie partner (Max Minghella) take charge of a grisly investigation into murders that are eerily reminiscent of the city’s gruesome past. Unwittingly entrapped in a deepening mystery, Zeke finds himself at the center of the killer’s morbid game.