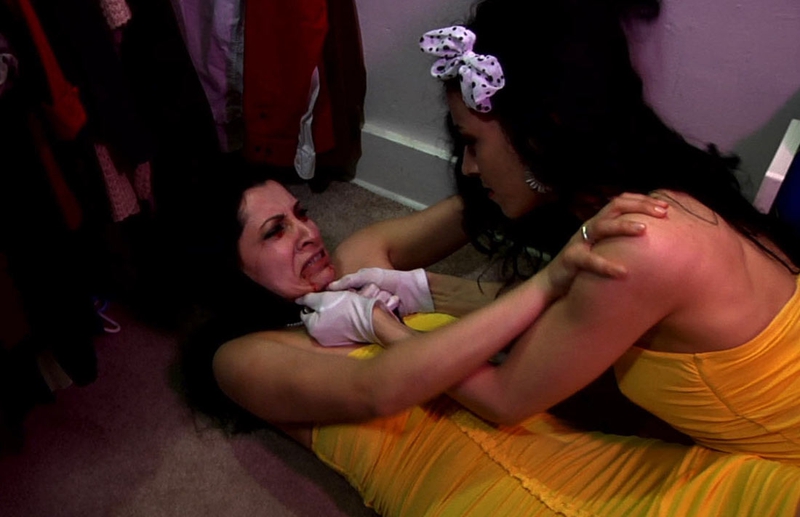 Editor's Note: This was originally published for FANGORIA on September 23, 2011, and we're proud to share it as part of The Gingold Files.

A new femme very fatale carves up the screen in Slaughter Daughter, an independent horror feature with a woman’s touch. Lots of women, actually; other than director Travis Campbell, 95 percent of the crew and cast were female. The movie is currently in postproduction, and its creators gave some exclusive words about the film to Fango.

Despite all the bloodshed Farrah enacts, Campbell tells Fango that Slaughter Daughter stands apart from current horror trends. “Unlike the torture-porn films that have flooded the scene in the past few years, Slaughter Daughter is a throwback to the 1970s/’80s Dario Argento era. It’s slow-burn, horrific storytelling leading to an all-out bloodbath. From the Pino Donaggio-influenced score, all the elements are there. And while it has all these specific genre elements, it is really about one woman going completely insane. This is absolutely a horror movie from a woman’s point of view. You don’t see that too often nowadays.”

Fiore agrees, and that was one of the key reasons she reteamed with Campbell, Miller and Dax following their collaboration on Mr. Bricks: A Heavy Metal Murder Musical (currently touring the festival scene via Troma). “I also loved playing a strong female character in such a testosterone-driven story, but this girl was ready for some fun, classic horror!” she says. “Lauren, Travis and I work so well together, and I could not wait to read the first draft and meet the Slaughter Daughter.”

Farrah, she elaborates, “is an ex-beauty queen who suffered through two years of agoraphobia after being stood up on her wedding day. The death of her father has driven her and her mother even further apart than they already were. Being around her family day and night begins to take its toll on Farrah—and with all the secrets they’re hiding, they deserve what is coming to them!”

During preproduction, the Slaughter Daughter team put together a series of webisodes to introduce the world to Farrah; you can see them here. These segments, which find the antiheroine in a mental institution following her self-mutilation, helped Fiore get into character in advance of the feature. “Finding Farrah within myself was a wonderfully creative experience,” she recalls. “Each webisode was improvised, and as the ‘doctor’ asked questions, I felt Farrah bubbling to the surface to answer them. This helped develop the role and give us an idea of what direction to take her in. With a title like Slaughter Daughter, it was crucial for her to have some of the same elements as any iconic horror character; however, she is not your typical serial killer. As the shoot progressed, we began to see that horror fans would relate to her and cheer her on. The feedback from fans so far has been great.”

Slaughter Daughter was also a reunion for Fiore and LaRocca, who first met while making Marc Leland’s upcoming She Wolf Rising. Watching the on-line segments gave LaRocca a feel for the project—and impressed her with Fiore’s commitment to her role. “Then I read the screenplay, and was blown away,” LaRocca says. “I know all actors and actresses say great things about the movies they’re working on, but I can say wholeheartedly that after I read this script, I desperately wanted the part, because I knew this movie was going to be different. Slaughter Daughter really has it all: a compelling story, disturbing and disgusting imagery, the lines between reality and delusions twisting and fading in and out, a truly well-developed cast of characters each having depth and purpose—and enough blood to fill every bathtub in Brooklyn, where it was shot. You couldn’t ask for a better combination of elements in a horror movie, and knowing Nicola was the lead and how intense she can be, I knew she could not only tackle that character with the ferocity it needed, but take it above and beyond what was written on the page.

“My only concern was my physical limitations, due to an accident I had last November,” she continues. “However, Travis and Kara Hearn, the DP, completely worked around it, and I don’t even think you see my cane at all in the movie. Also, Travis let me improvise, so I took advantage of that to give my character Apple more sassiness, which was really fun. I really wanted to take Apple from a small role to hopefully one that will stand out and give her the personality I imagined she would have: a completely innocent, positive person who has no idea what she’s getting into. I felt so lucky to be a part of this production; it was the first acting job I took after my accident, and it helped me get back on my feet and give me the inspiration to keep pushing toward a 100 percent recovery. Not to mention that everyone who worked on it was so talented and willing to go to extremes to get the job done, and done well. I personally laid in a pool of blood on a hardwood floor for two hours, and had a bruise on my face from it the next day, but it was so worth it.”