Yeah, you heard us. 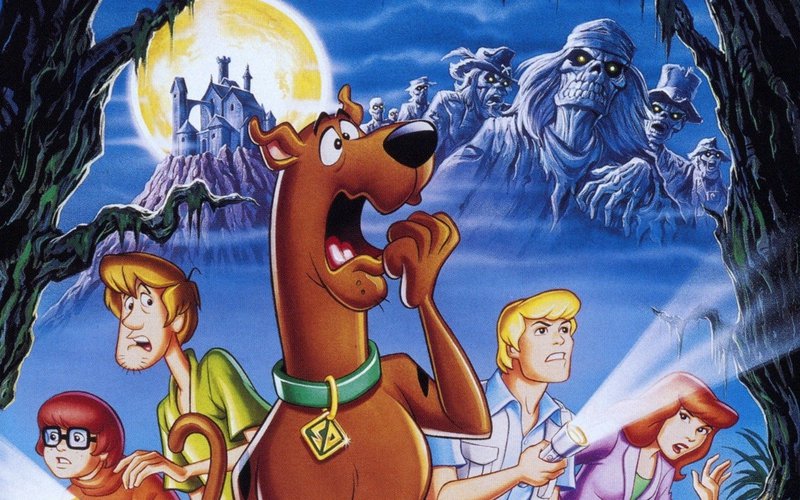 Scoobs and the gang on Zombie Island.

Almost as old as the sounds of cinema itself are the ghastly groans of zombies. While this specific brand of undead beings has never truly died off, there have been many ups and downs within the genre since it first rose from its grave to terrify the living. Notable periods of success range from the nefariously racist films of the 1930s, the critically acclaimed cult era of the late 1970s and '80s, and the mainstream success of the 2010s. One decade that is rarely discussed, however, due to a somewhat drought of entries, is the 1990s. But if you ventured out of the horror section of your local Blockbuster and over to the family films, you’d find a direct-to-video gem that is not only the crown jewel of zombie films for the whole decade but, if you ask me, one of the most lovingly crafted films in the whole sub-genre: Scooby-Doo on Zombie Island.

Looking back at the Scooby-Doo universe with the hindsight that we have now, it may be hard to think of horror’s favorite dog and his friends as anything other than omnipresent. But by the start of the '90s, the franchise had all but stalled out. In 22 years, there had been eight (yes EIGHT) different series starring Mystery Inc., and as each new show mostly provided diminishing returns, it seemed like viewers had grown tired of those meddling kids. If building a reputation of unmasking monsters and exposing schemes proved anything, however, it would be that things aren’t always what they seem.

In 1991, Turner Broadcasting purchased Hanna-Barbera and the studio’s extensive library of animation, and Scooby-Doo became one of many familiar faces finding young fans on the newly formed Cartoon Network. In an early example of the 20-year cycle of nostalgia for one’s childhood that is all too common nowadays, parents who once watched Scooby and the gang on Saturday mornings were now sitting down to enjoy the show with kids of their own. What’s old is new to fresh eyes and the all too familiar formula of the brand was revitalized by this modern audience.

With a new generation of kids now invested in the adventures of our teen sleuths, Scooby stock was arguably the highest it had ever been. Since classic episodes of the series proved popular enough that just starting a new series (like they had always done) was unnecessary, the studio steered the Mystery Machine down a road it’d never been before, a straight-to-video film known as Scooby-Doo on Zombie Island. Sure, Scooby-Doo had previously been in made-for-TV specials like Ghoul School and the Reluctant Werewolf, but everything going into this film was different.

Unlike many of Hanna-Barbera’s cartoons, which were produced quickly and cheaply, Zombie Island had no such restrictions. The animation was being handled by the Japanese studio Mook Animation, who worked on some of the most visually striking cartoons of the 1990s. Spawn: The Animated Series, Men In Black: The Series, Æon Flux, SWAT Kats and more gives you a resume loaded with a lot of style points. The use of shadows and muted colors in Zombie Island’s visuals provide a very striking, almost comic book look.

Dusting off the script from an unproduced episode of the aforementioned SWAT Katz, Zombie Island was given no deadline for when it needed to be delivered and that gave production the time and resources to create an eerie atmosphere that no Scooby release before (OR SINCE) has quite had.

The opening scene of the film seems like just another episode of the show. The gang is being chased around a dilapidated castle by a hulking, Creature of the Black Lagoon-type monster while the Scooby-Doo, Where Are You! theme plays (covered by Third Eye Blind). All of this feels so familiar because this basically is an episode of the show that we never got to see. We are tuning in just in time to catch the end of a mystery that Daphne is recounting on a talk show, where she acknowledges the predictable formula of Mystery Inc’s most famous mysteries: “the monsters and ghosts always turned out being bad guys in a mask."

We learn from the start that this is not a normal Scooby-Doo mystery from its self-referential criticism. Two years earlier, Scream lovingly dissected and unraveled the slasher genre, and Zombie Island set out to do the same for the obvious tropes of a vintage Scooby-Doo mystery as well as with classic horror in general. I think it succeeds in doing so (it even has its own version of Gale Weathers with this successful career woman take on Daphne Blake).

As the gang gets back together and tours across the country in search of real supernatural and paranormal monsters for Daphne’s show (years before real life, ghost hunting shows really became as common as they are now), they run into the same old “mask on, mask off” routine of their past mysteries. That is until a chance encounter at a New Orleans market with a woman named Lena who says that she works and lives in a haunted house owned by Simone Lenoir on the nearby Moonscar Island – named after a famous pirate who buried treasure on the island centuries ago.

After landing, the ghost of Morgan Moonscar tries to scare the gang away by carving “Get Out” on the kitchen wall. Daphne is optimistic that after all this time they finally found a real ghost, but Fred and Velma are suspicious. After countless greedy, old men have tried to scare them away from abandoned carnivals or spooky mansions, how could they not be suspicious? As always, though, Scooby and Shaggy are the first to (repeatedly) encounter our titular monsters, yet still Fred and Velma are skeptical.

As clues are discovered and suspects arise, this is where we learn that this isn’t a case of someone using legends and props to scare visitors away so they can dig up pirate gold. This time, the zombies are real... and if I’m being honest, that twist on the formula wasn’t very surprising even at the time, because the film was marketed with the promise of real monsters.

If there is no one in a mask then there is no one behind this mystery, right? Wrong! Things are never as they seem. This is where Zombie Island makes a 180-degree turn a second time and ends up back on track, but those extra twists make all the difference. This isn’t a story about the influence of capitalism like with past mysteries. The stakes are higher because it is about life and death.

After putting a more morbid spin on the old-fashioned running away montage – set to the absolutely awesome “It’s Terror Time Again” by Skycycle – Fred, Daphne and Velma (as well as Beau the gardener) are captured by Simone and Lena using wax poppets modeled after them. In their evil villain monologue they reveal that Morgan Moonscar came to the island 200 years ago and drove all of the island inhabitants into the swamp where they were killed and eaten by crocodiles. Simone and Lena slipped away and prayed at the altar of their cat god for the power to carry out revenge on the pirates by transforming into a cat beasts. They were successful, but now they must drain the life force of normal humans under the harvest moon in order to maintain their immortality. That is why they lured the Scooby gang to Moonscar Island, just as they had done to countless others before. The zombies that roam the island are the nearly empty husks of past victims of this ritual that had been trying to warn the gang to leave before getting trapped in their same hell.

Zombie Island succeeds where many other zombie movies fail, and that is by making you sympathize with the zombies. They were living people once, and the film shows the humanity in that. It could be said that murderous pirates and confederate soldiers don’t deserve that sympathy and I would agree. (The south won’t rise again, but it will rise from the grave, evidently.) However, they are in the same boat as hapless tourists and vagabonds who had their life drained in the 140 years since the Civil War ended. The zombies as a whole aren’t totally good, nor are they all bad. Whether werecat or cadaver, this film went the extra mile to make their villains complex. These are all people who became monsters, but they have their own circumstances about how they got there.

The most interesting of them all being Simone and Lena themselves. What started as a means of getting revenge on Morgan Moonscar and his crew for the slaughter of her friends and family distorts as time goes on and they become blinded by their own hubris. I love the feminist ideals of two women striking back against pillaging pirates and the Confederacy, but by the time they lure Mystery Inc to the island, their malice had long overtaken them. This wasn’t about reluctant self-preservation anymore; this was a cat toying with a mouse for the sheer fun of it. Simone and Lena became exactly what they hated, and I love that as a story element. Your past traumas don’t excuse how you treat others moving forward.

Addressing these complex issues is only possible because Zombie Island doesn’t talk down to its audience. People being fed to crocodiles by pirates, ritualistic sacrifice, 200 years worth of missing humans whose bodies were dumped in the bayou, flesh disintegrating from skeletons, Fred ripping a man’s head off with his bare hands, people almost getting their faces melted off like wax, and the broad understanding that the Scooby gang almost bit off more than they could chew when they found the real monsters they were looking for – all of that proves that visually the movie is dark, but thematically it is even darker. The stakes were never higher and these scenarios are legitimately gruesome in any horror film, let alone in a PG direct-to-video cartoon about a talking dog! There were very low expectations for what a Scooby film should look like, but they way overshot any bar that was set.

Scooby-Doo, as an intellectual property, exists in a timeless space. Groovy '60s kids who were living in a dial-up internet age that now has wireless 5G. They continue to be evergreen while lovingly paying homage to classic horror films dating all the way back to the black and white era. Adrienne Barbeau (as Simone Lenoir) revisiting the world of The Fog by getting entangled with pirate ghosts, a Wickerman-esque community of islanders who instead worship a cat god, the lycanthropic cat transformation of our Cat People antagonists, and most obviously, the long dead black magic-created zombies like in White Zombie – this movie is one of the last major examples of the latter, and I hope that a trope like that stays dead and buried.

Every year since the release of Zombie Island, Scooby has averaged at least one new direct-to-video film on top of the 2000s live-action films, five new television shows, numerous specials, being the centerpiece of a Hanna-Barbera cinematic universe started in Scoob, and so much more. All of this can be attributed to Zombie Island for taking the ball and running with it – for showing that horror isn’t just for adults, and that Scooby-Doo isn’t just for meddling kids.

Scooby-Doo on Zombie Island is the best zombie film of its era, a trailblazing film for the horror genre in western animation, and a project that was crafted with reverence and respect for its source material and fledgling genre fans alike.