Scarred For Life: The Return!

Horror luminaries on the first film that traumatized them. 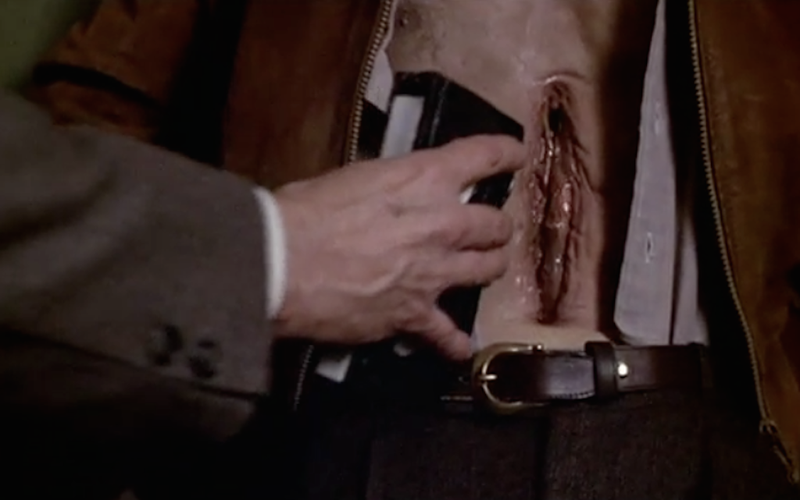 Yeah, that'll do it: VIDEODROME.

Editor's Note: We're happy to have Tony's "Scarred for Life" column back on Fango, in which horror notables talk about the movies that really screwed them up. Read the rest of the entries HERE.

See any good scary movies lately? You know, the kind that shake you to your core, haunt your dreams and, well, mess you up for life? For our monthly column right here, FANGORIA checked in with a number of emerging genre filmmakers and their stars to see what classic fright films shocked their world.

Ema Horvath, actress (The Mortuary Collection, The Gallows Act II and What Lies Below, now on digital and VOD)

“I had a censored childhood, so my first truly disturbing horror experience happened embarrassingly late. I was well into my college years when I was forced to watch David Cronenberg’s Videodrome [1983] for a class. I hated the film when I first saw it. I found the bizarre body horror irredeemably disturbing, and I couldn’t get the image of a pulsating VHS tape being inserted into James Woods’ gaping stomach out of my head. But I came crawling back a few months later and worked my way through all of Cronenberg’s ’80s/’90s canon. He’s truly a master of burning disgusting images onto your retinas for life – the exploding head in Scanners, the (ahem) ‘wound penetration’ scene in Crash, Jeff Goldblum’s ear falling off in The Fly, almost every frame in Naked Lunch and on and on. Besides the delightful practical effects, I absolutely adore the surreal nature of his movies. I always feel relief when they end and I have both feet firmly planted back in this world.”

Liam O’Donnell, director (Portals, Beyond Skyline and Skylines, now on digital and VOD)

“My parents didn’t let me watch any R-rated films until Terminator 2 [1991] came out and there was just no stopping me. But I experienced a lot of my favorite horror movies on television like TV38’s The Movie Loft, which usually edited the gorier parts out. So, the most horrifying scenes would be Ash bleeding the white milky liquid in Alien or the dog biting into the fence in The Thing. However, there was one film that I refused to wait for or view with any compromise…

“In the second grade, I found a classmate whose parents let him watch everything: Freddy, Jason, you name it. So, I arranged a long con with my parents, eventually securing a sleepover at my new best pal’s house where we rented THE FILM whose VHS artwork, aura and insane-sounding premise had fully captured my imagination: Predator [1987]. I was in and out of hospitals a lot when I was young, dealing with an optic nerve tumor that took the sight from my right eye. So, Arnold, whom I saw early on play a machine that could rip out his own defective eyeball and keep on motoring, was my ultimate wish fulfillment avatar. But in Predator, of course, he’s a flesh-and-blood human hero up against the most badass alien I had ever seen. Sure, Dutch is the ultimate alpha male, but Arnold did something he’d never really done in a film before: showed fear. Which, of course, scared the hell out of me because if Arnold was afraid, it’s got to be pretty fucking scary, right? The skinned corpses of Harper’s team are such visceral imagery made all the more real by the crew’s disturbed reactions. That really is the genius of the film, how an impeccably cast ensemble of larger-than-life badasses are each broken down by the savagery they encounter. For my money, the MVP is Bill Duke’s Mack, who not only has amazing speeches – ‘You’re ghosting us, motherfucker…’ – but really grounds the film emotionally. ‘He was… my friend.’ All of which is a preamble to say poor Mack’s demise, in its swift and decisive cruelty, was the one that scarred me for life. You never forget your first head explosion, do you? Thirty years later, and I am still chasing that high.”

“Kubrick’s The Shining [1980]. For some reason, this was always on TV when I was a child. It always struck me as the anti-horror horror film, in that the monster isn’t out there, coming to get us; the monster is inside us, coming out. I found that much truer and more terrifying. The fight against the true Enemy is an inside-out war.”

“When I was 7 or 8, I watched Alfred Hitchcock’s Psycho [1960]. Some scenes had such a big impact on me that I had to reenact them with friends afterward. What was most scary to me was that it was so easy to identify with the bad guy, Norman Bates; his insecurity, fragility and shame. He was like a kid, but then of course, he had this monstrous mother hidden inside him.”

“For me the movie is Cujo [1983]. I saw it too young, maybe. I grew up with a single mom, and we also had the similar car as the mom and son in the movie – a lot of parallels. I remember being terrified and crying a lot… The funny thing is, Cujo didn’t age really well. So, not only is it not really scary as an adult, at one point you can actually see a big stuffed dog being thrown at a windshield. Special effects have definitely evolved since that time!”

“That’s a bit of a tough one since there have been a number of movie moments which have disturbed my young and impressionable mind. I respect any movie that can truly bother me on a gut level. But one of those top moments had to be the end of Don’t Look Now [1973]. The dwarf in the red coat was such an unexpected and horrific image that it burned into my brain for a lifetime. Having grown up around horror movies and seeing how they were made, I was pretty desensitized to a lot of what I watched as a kid, but for some reason, I could not get a handle on what I’d just seen and it tweaked me.

“There was another movie – The Masque of the Red Death [1964]. There was a big costume party and some guy in a gorilla suit was strung up and set on fire! And that was definitely one of the most horrible things. All the guests just stood around and watched while this guy burned to death. It was just too much.”

“A feeling of nausea that persisted for months. A numbness in the deepest parts of my human form. A sense that even the bluest skies were oppressive. These are the feelings I carried after the first time I pressed play on a VHS copy of Pink Floyd: The Wall [1982]. A movie that in its hunger to depict trauma and isolation is itself a fantastically traumatic experience. Though I’ve been disturbed by movies before (Watership Down, An American Werewolf in London) and since (Martyrs, among several), nothing quite bludgeoned me with the force of The Wall, an experience as aesthetically innovative as it is horrific. One of my all-time favorites, guaranteed to make me quiet and upset every time I rewatch it!”

“The first really scary scene and the first sex scene I ever saw were both in the same movie: Ghost [1990]. That probably explains why, as I’ve grown up, I think horror and sex belong together. Nobody really considers Ghost that scary, but I saw it when it came out on video in 1991, probably because my mom rented it and we watched everything together. I was 6. It was only rated PG-13, but I thought the shadows that came to life to pull Tony Goldwyn to Hell were terrifying. Whoopi Goldberg and her bizarre possessions also unsettled tiny me, but I also found everything Whoopi did to be so confident and exhilarating. I really need to watch this again.”

Chase Williamson, actor (John Dies at the End, The Guest, Victor Crowley and I Blame Society, now on VOD)

“The first movie I can remember actually disturbing me to the point of incapacitating me in some way was the original It miniseries [1990] with my president, Tim Curry. I had just moved from San Diego to Texas as a 7-year-old, and at the time, the eponymous Amber Alert kidnapping case was going on and pervaded the news cycle. I was genuinely scared for my life when I left the house, and rollerblading through my neighborhood felt like a risk. I remember not being able to wrap my head around what may have happened to Amber. It scared the shit out of me. Then an older cousin came to visit and introduced me to, among many spooky things, Stephen King’s It. Tim Curry as Pennywise scares the shit out of me to this day because, especially in my POV as a kid before I read the book etc., he’s not some creature or even a monster, he is something so much scarier – he just [looks like] some random guy.”

“I'm going to be a bit of a wussy here, but it wasn’t even a full feature that scarred me, it was the trailer for Child’s Play [1988]. It starts off with a kid’s birthday party, and the voiceover is all about a kid having the perfect birthday and finding friendship with this doll. I was watching the trailer at the local drive-in, and we didn’t have ‘The following preview has been restricted for mature audiences’ cards up front, so this was utterly disarming and terrifying for a 5-year-old kid. I’d never experienced such a tonal shift from a feel-good, family-looking, Disney-style film into this serial killer psychotic killer doll horror movie!”