Scarred For Life: The Fantasia Edition

Horror notables of Fantasia past and present share the formative films that messed them up!

Dedicated horror fans are always on the lookout for the “next big thing” and know the best place to prowl for fear-inducing discoveries is at the plethora of international genre film festivals that take place throughout the year.

Next month, Montreal’s Fantasia Film Festival (www.fantasiafestival.com), where I serve as Co-Director of International Programming, celebrates 25 years of bringing audiences must-see scary discoveries as part of its wide-ranging cinematic lineup.

Four of July’s Scarred for Life directors will have movies playing at next month’s Fantasia, which will be a virtual (throughout Canada) and in-person event (at Montreal’s Cinema Imperial) from August 5-25. And three of the actors weighing in below (The Devil’s Rejects’ Michael Berryman, Unearth’s Marc Blucas and Depraved’s Owen Campbell) all starred in movies that premiered at past Fantasias. Let’s see what movies scarred them for life!

Michael Berryman, actor (The Hills Have Eyes, Deadly Blessing, The Devil’s Rejects and Room 9, on DVD and digital July 20)

In 1973, as a young university student, I saw the local theater marquee advertising a film called The Exorcist. I went to see it alone. The scene where Linda Blair’s head spins around, even though I knew it wasn’t a real person but a puppet, the image was so powerful that it made me contemplate good versus evil. It affected me to the point that when I got home, I actually got down on my knees and said my prayers for the first time in over a decade, just in case!

Craig Moss, director (Bad Ass, Nightmare Nurse and Let Us In, now on digital and VOD)

Growing up in the San Fernando Valley during the ’70s, we were privileged to have one of the first cable boxes in human history called Z Channel. Instead of getting on the required summer reading, my brother Randy and I would fill our time with movies like The Man with the Golden Gun, The Sting and Emmanuelle. All this wonderful cinema at our fingertips without any parental controls whatsoever. It was a blessing and a curse, especially for an impressionable nine-year-old who had open access to films that would leave lasting scars on the brain, taking years to shake off. However, there was one film in particular that, to this day, has left a severe scar across the cerebellum… that film is Damien: Omen II [1978].

Holy shit… that kid Jonathan Scott-Taylor who played Damien was so incredibly creepy that I couldn’t sleep for weeks, and when I did fall asleep, he haunted me in my dreams. Not to mention the very sterile tone of the film, coupled with one of the scariest scores of any motion picture, still give me the chills as I write about it now.

Thanks to Damien: Omen II, that summer became the most productive one of my life. I was able to read all required summer reading a month before school started, while the Z Channel box collected multiple layers of dust.

I grew up on a ranch in Florida in the ’80s, and for a few years during elementary school, I’d sleep over at a friend’s house who had cable. The ritual involved sneaking out of bed and watching HBO and Cinemax horror films all night. They were way more shocking and transgressive than I was prepared for. Jason and Leatherface gave me nightmares for a decade.

But it was a couple years later that I watched a VHS copy of Nicolas Roeg’s Don’t Look Now [1973] and was scarred for life. The ‘grownup’ psychological horror felt real. I immediately connected with the girl in the red coat and could imagine my grieving parents. I left fully convinced of precognition and the paranormal. Roeg’s film is a masterclass in technique and frightens me to this day. 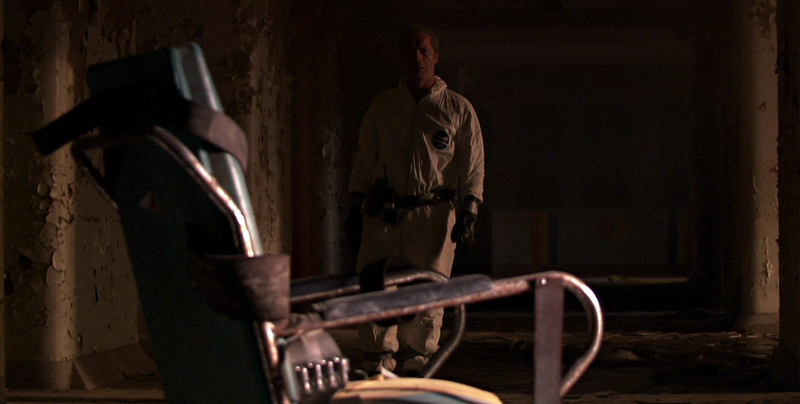 There’s a movie called Session 9 [2009] that was made by USA Films before they became Focus Features. It’s not a great film, but 45 minutes of that movie is the scariest movie I’ve ever seen. These workers are in this old insane asylum taking asbestos out. And just the tone that [the filmmakers] create, where there’s spooky recordings of a woman who has split personality syndrome… It’s just so haunting, so much so that I’ll have nightmares in that building. It’s actually scarred me for life. I’m in this space and it’s spooky and I can hear dripping water and something is there and it’s going to get me.

I have many horror movie moments seared into my brain as a kid—seeing the Alien come out of John Hurt’s stomach in the birthday party room at The Video Exchange Center; watching Freddy Krueger’s first screen appearance in Scott Varish’s basement; and hearing those first notes of the Halloween theme while hiding under a blanket (and wanting to learn them on the piano!). But the Scarred for Life trophy without question goes to Jaws [1975]. I watched it with my parents in our living room when it first came on TV…and every time the music started, I would say, ‘Oh, man, I always have to pee during the good parts!’ And I’d run upstairs and ‘go to the bathroom.’ There isn’t a body of water—and by that, I mean ocean, fresh water lake, small stream, bathtub, puddle—that I don’t check for a dorsal fin and think, ‘I need a bigger boat.’ I recently saw a large group of very young kids—maybe 4 or 5 years old—all taking surfing lessons in Santa Monica. My very first thought was, ‘Those stupid kids,’ followed by, ‘What a blessing to grow up in a generation without Jaws.’ Fuck the water. Fuck Spielberg. Fuck Scheider, Dreyfuss, Shaw and John Williams. And as fate would have it, my seven-year-old daughter accidentally stumbled upon a Jaws clip during an unsupervised moment on YouTube. She’s been sleeping in our bedroom for eight months now. Every night. This movie continues to haunt me.

I find the horror genre is always more frightening when the film is grounded in reality. It’s always been much scarier to me than genre films with supernatural elements. It’s one of the reasons I was so interested in making my most recent film, What Josiah Saw—it felt possible and, in some ways, possibly relatable to people out there. There were a few films I watched when I was young which had scenes, or moments within them, that had a profound effect on me. For instance, Twin Peaks, Deliverance, Kids… Not horror films, but effective in regards to ingraining unforgettable visuals into my head.

I would absolutely classify [the Russian war film] Come and See [1985] as a horror movie. War is Hell. That statement has been echoed over and over by veterans, biographers, professors, etc.—and it’s safe to say we can all agree to that. Come and See is a film that delivers so well in its execution, I felt like this was the closest a war film has accomplished to portraying that Hell. It’s a terrifying examination, and it rattled me to the bone.

I remember waking up to piss in the middle of the night at my buddy’s house when I was seven or eight years old. On my way to the bathroom, I peeked into the den. There on the TV screen, a police officer, Zed, had his pants down and was pounding from behind a man, Marsellus Wallace, wearing a gag ball. Meanwhile, another guy, Maynard, watched on in excitement. I remember my friend’s dad being very overweight and only wearing his stained underwear. He was drunk, smoking and cackling with laughter at the TV while his wife was on the couch next to him with her top off, breast-feeding an infant. The scene and setting were too much for my little brain and scarred me for life. The movie was Pulp Fiction [1994]. 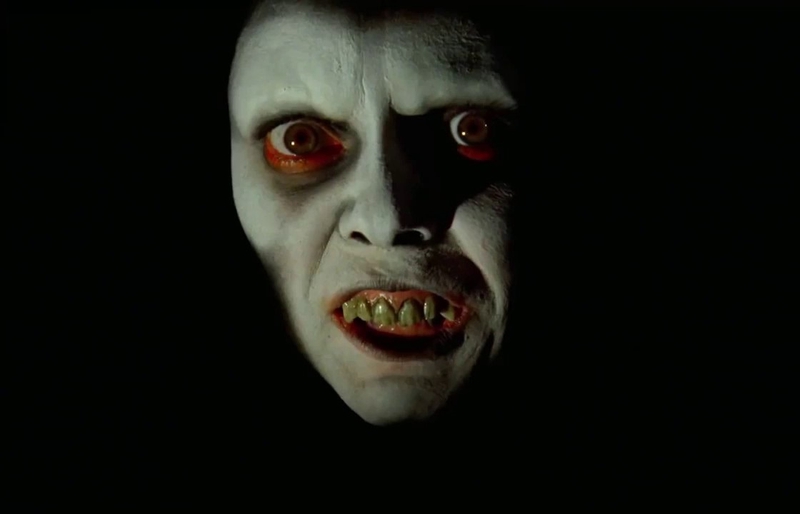 Jonathan Cuartas, writer/director (My Heart Can't Beat Unless You Tell It To, now in theaters and VOD)

What messed me up about The Exorcist [1973] wasn’t Linda Blair convulsing in bed with a rotating head and pea-colored projectile vomit. It was something a lot quicker than that, a subliminal image that burned its way into my mind and has never left. It was Pazuzu, a.k.a. Captain Howdy. His face. That pallid, gaunt, horrifying face that flashes for a few frames during Father Karras’ dream. I was young when I saw the movie, and honestly, I didn’t remember much of it aside from that terrifying face. I read somewhere that the footage was reappropriated from a makeup test. Something about the face looking so human, and not beastly, scared me even more. I still have dreams of that face. It hides in the attics and doorways and glares at me when I make eye contact. I don’t think such an indelible image will ever be replicated in horror cinema.

Owen Campbell, actor (Depraved, Super Dark Times, The Americans and My Heart Can't Beat Unless You Tell It To, now in theaters and VOD)

I was just speaking to my friend Z about Takashi Miike’s Audition [1999]. We were young when we saw it, and still the film arouses a vivid nausea, a tight-chested fear, when we recall watching it. The pacing coupled with the feeling of confusion still haunts me. It’s a film that leaves you deeply unsettled and feeling quite helpless. I’d say helplessness can be the most horrifying emotion especially for a young person.

Mishna Wolff, writer (Werewolves Within, now in theaters and VOD)

Twilight Zone: The Movie [1983] messed me up pretty bad, particularly Joe Dante’s segment, ‘It’s a Good Life.’ That messed me up pretty darn good. Oh, I was so little when I watched it. My dad’s girlfriend, who hated kids but loved horror films, would come over with a stack of them, and I would try not to watch, but I would watch. And that one was scary because there was a child with unbelievable powers and strengths. And the idea that someone with so little prefrontal cortex, with very little impulse control, could have that much power, has always been something that’s frightening to me.