It's just not spooky season without SAW. 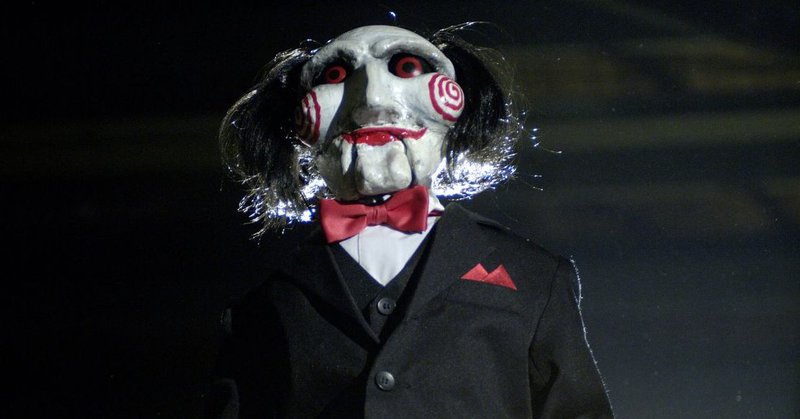 Ah, the “Golden Age” of horror – something I haven’t the fortitude to debate in comment sections or Twitter threads. The “Crimson Age” of horror, though? I remember those years fondly when Saw spawned sequel after sequel of slaughterhouse entertainment that The Saw Skwad™ or The Kramer Krew™ could count on every Halloween. It’s rather remarkable, in hindsight. James Wan and Leigh Whannell introduced Jigsaw and his body-eviscerating traps, then dominated October box office slots reserved for the most ghoulish and ghastly offerings. Over a succession of years, it wasn’t Halloween without another onslaught of cadaverous cave-in carnage, morally ambiguous motivations, and Billy's in-need-of-WD40 tricycle squeaking to the bank.

My deep, demented confession: I miss having a new Saw movie every Halloween.

When discussing the most successful event-based horror franchises of my generation, it’s impossible not to mention Saw alongside the Final Destinations (modest moneymakers) and Paranormal Activities (hella profitable). Lionsgate kept a stranglehold on Halloween howls until poof –Saw 3D went out with a whimper, and Jigsaw staged a blink-and-miss comeback. Some might have celebrated the death of a series that becomes more insatiably convoluted with each furthered entry, but I felt immense sorrow. Saw was reliable and slapped a sticker on its package that sold what’s in the box without apology to Gwyneth Paltrow. That kind of dependable release consistency is what Halloween deserves, and dare I posit that we didn’t know how good we had it punching tickets to graphic bodily gorification that seemed to double the ante each year?

From 2004 to 2010, audiences stepped into another collection of Jigsaw’s traps – whether John Kramer or his disciples – ready to shriek away another crisp weekend night in peak seasonal conditions. No title premiered earlier than October 23rd nor later than October 29th. Paranormal Activity could only muster three consecutive sequels in a row (2010’s Paranormal Activity 2 to 2012’s Paranormal Activity 4), while Final Destination linked no two movies in back-to-back calendar years. Saw ruled almost an entire decade of horror nostalgia that no doubt spawned countless other historical additions to horror’s canon, but none of which carried Saw’s hypable momentum. Freddy face-planted, Jason got sidelined by a judge’s gavel, and countless other remakes adopted Saw’s disturbingly violent focus, yet barely any passed “Go,” let alone kept stride.

To be fair, manufactured output quickness does not determine quality. It’s arguable that with longer breaks between Saw entries, scripts could have connected dots with more precision or emphasized a union between nauseating implements of death and the fraying threads that tie all proceedings to John Kramer. That said? The visual spectacle of each Saw remains the franchise’s despicable signature, and there was never a dip in imaginative maliciousness or increasingly complex torture devices. Saw took Seven and cranked the horror influences well past eleven – should these outrageous mechanisms, including cranium-crushing ice blocks to collapsible human broilers, have become less intuitive by the application? I’d agree; speed kills. As is? Writers and designers challenged the artistry of executions without ever releasing the gas pedal (RIP Chester Bennington), and quite frankly, it’s a bit of a Halloween miracle.

Financial justification alone ensured Tobin Bell’s schedule would remain packed with Jigsaw bookings, whether that be pre-autopsy or in flashbacks alongside those who worshipped his sinister syllabus. Saw 3D clocks in with the most expensive budget of $20 million and grossed on the high end with a $136 million worldwide total. Otherwise, no Saw budget eclipsed $11 million (Saw VI) nor grossed less than $100 million worldwide (except Saw VI with $68 million, a nosedive reaction to Saw V amidst economic depression). Factor in marketing expenses, and Saw remained an impressively profitable horror franchise that could maintain a reusable formula but distinguish chapters that were churnable and burnable without fatigue.

Glance around horror culture outside cinemas and Jigsaw’s name is synonymous with an entire “torture porn” subgenre. Billy’s ghostly white face with swirly red cheeks can be found on t-shirts, in YouTube parody videos – hell, rappers commission $100K custom Billy bling, and you can wear Billy’s likeness as a character skin in Call Of Duty: Warzone (like me). To negate Saw’s influence as meat grinder worthlessness is uneducated at best, ignorant and dismissive at worst. It’s not the “why” that impresses me whenever I recall the franchise’s marathon run – it’s the “how,” in its practicality and proficiency against all hourglass odds.

That’s the excitement that Spiral: From The Book Of Saw hits upon, whether you’d dub that nostalgia or a fleeting moment. Not to say October’s been abandoned by spooky storytellers – last October debuted (no joke) around forty new-to-platforms horror flicks across streaming providers and purchasable on-demand services. But there has been an increasing trend to release tentpole horror flicks like The Conjuring or It in summer months to stake claims with minimal genre competition. In August of 2019, I wrote about why studios opted for summer premieres of titles like Brightburn, Annabelle Comes Home, Scary Stories To Tell In The Dark and It: Chapter 2 (sneaking into Labor Day weekend).

Granted, Spiral is leading a charge back into theaters this May with Americans getting vaccinated by the hour – but the callbacks and memories are chilly-weather vivid. I think back to John Kramer’s first implementations of hacksaws and messages about discovering the will to live. I winced as Amanda Young (Shawnee Smith) slammed into a pit full of hypodermic needles, nearly clenching straight through the flimsy plastic armrest cup holder. I reached for continuity context clues as timelines intertwined, proteges failed, and tests bled from one convoluted attempt at Saw lore expansion to the next. Still, though, Lionsgate mastered the art of planting butts in seats by creating an October tradition that included promises of buckwild twists (good or bad), industrial-grade torture devices, and a guarantee that special effects gurus will give death the blockbuster treatment. There’s a common sentiment echoed around horror convention halls about how there hasn’t been a slasher icon like Jason or Michael or Freddy since the '80s into '90s period – lemme stop you right there and just say Jigsaw will be remembered as the definitive horror villain of the 2000s, with a reputation that will outlast his haters.

In my heart of hearts, I hope Spiral: From the Book of Saw devours sales like piggies inhale slop and Saw X makes its triumphant return to October’s still exceptionally creepy but less predictable horror roster. John Kramer’s craftsmanship and the entire franchise’s collaboration of directors, writers and effects warehouses became influential overnight because their product was – and still is – a primo after-dark theater attraction. All the daytime drama of police procedurals, all the bonkers plot rewrites and mysterious overlapping of decades-spanning soap operas, plus all the decapitations, disembowelments, and to-this-day disgusting executions that are their own challenge to endure. As the “Crimson Age” dawns anew, may horror fans reflect not on the revival of something maligned and misremembered, but the re-ante of a legacy that’s as durable as your momma’s Tupperware collection filled with Jigsaw’s juicy sanguine leftovers.

I miss Halloweens with Jigsaw – may his games be ever in our holiday favors once more.