Archive reviews from The Gingold Files. 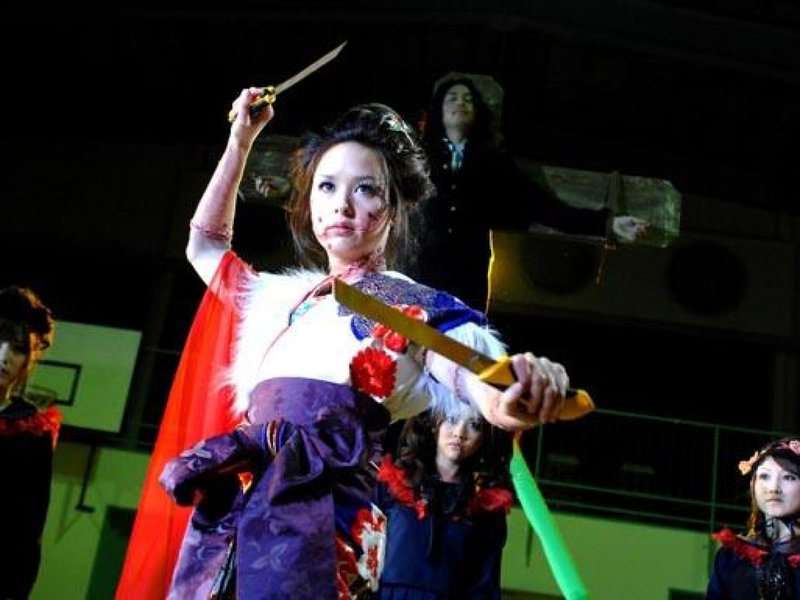 Editor's Note: This was originally published for FANGORIA on June 30, 2009, and we're proud to share it as part of The Gingold Files.

Vampire Girl vs. Frankenstein Girl is exactly what you’d expect from a teaming of the directors (Yoshihiro Nishimura and Naoyuki Tomomatsu) who gave us Tokyo Gore Police and Stacy: a supergory collision between schoolgirls and the undead that represents the zenith of extreme Japanese splatter satire. And it has arrived at the New York Asian Film Festival just in time to show up Blood: The Last Vampire, which represents a nadir in English-language adaptations of Far East fright fare.

Both films detail what happens when a young woman with bloodsucking tendencies comes to a new school, which in the case of Vampire Girl is already a haven for all sorts of freaks, some of whom have formed their own clubs. There’s one group of coeds who have raised self-cutting with razors to the level of a competitive sport, and another bunch who take the real-life “ganguro girl” trend—dressing and behaving African-American, right down to darkening their skin—to bizarre extremes. In this environment, freshly arrived Monami Arukado (Yukie Kawamura) seems downright normal, and like many another teenager, she develops a crush on a handsome classmate, Jyugon (Takumi Saito), who narrates the film and is thus helpful for introductions like “This is Midori, the oversexed school nurse.” Unfortunately, he’s already spoken for by Keiko (Eri Otoguro), queen bee among the school’s mean girls. Love stinks, huh?

Only in this case, Monami, being a vampire, has a couple of tricks up her sleeve. She gives Jyugon a chocolate dosed with her blood, to begin turning him into a fellow creature of the night (figuratively; these vamps seem unaffected by daylight) and her new boyfriend. Keiko, of course, isn’t about to give up her guy without a fight; add the fact that her father Kenji (Kanji Tsuda), the school’s vice principal, is also a science teacher conducting experiments in the basement that Herbert West might find familiar (with the help of Midori and hunchbacked janitor Igor), and the stage is set for the titular bout, and all the hacking, flesh-rending and blood-spraying that goes with it.

And if you’ve seen Tokyo Gore Police, you know that “spraying” is not a euphemism. The grue gushes as if from firehoses (Nishimura claimed at the Asian Fest premiere that he utilized “two tons” of it) as humans, former humans and not-quite-humans take each other apart, and the opening scene alone features an assortment of ways by which a head can be reduced to an eye-popping skull. Amidst all the red stuff, Tomomatsu’s script (based on a manga by Shungiku Uchida) finds other ways to slash at the boundaries of good taste, particularly when it comes to the “ganguro girls,” who occasion jokes about Barack Obama and Michael Jackson (the latter got a particular rise out of the Asian Fest crowd, given the timing of the screening).

Orchestrating all this outrage and offensiveness without wearing out its welcome is a tricky balancing act, but Nishimura and Tomomatsu pull it off. As in any film of this kind, the gags occasionally stick in the craw without coming out as laughs, though they certainly don’t lack for variety, and even amongst all the ultra-mayhem, the directors are able to mine visual slapstick out of a single drop of blood. The light tone is abetted by the film’s spoofing of teen romantic-comedy traditions, and J-cinema fans will appreciate a couple of cameos: Eihi Shiina from Tokyo Gore and Audition as Monami’s flashbacked-to mom, and director Takashi Shimizu, for some reason lecturing about his own Ju-on and Grudge films in Chinese class. This kind of knowing silliness pervades Vampire Girl vs. Frankenstein Girl, a movie whose creators are clearly having a ball and that wholeheartedly invites the audience to join them.

No such joy is tangible in Blood: The Last Vampire, though, just the wearying sense of a filmmaking team desperate to cash in on a marketable title. Based on the 48-minute anime that stood just fine on its own, thank you very much, it plays fast and loose with the details of its source, though the basic story remains the same. Saya (Korean actress Gianna Jun) looks like an ordinary teenager, but she’s actually the centuries-old child of a human father and vampire mother, who has been trained and tasked by a secret sect (here known as “The Council”) to slay demons and other supernatural nasties. Her latest assignment takes her to an American military base in Japan circa 1970, which has been infiltrated by bloodsuckers.

As in the animated version, Saya winds up rescuing a human who tags along on her subsequent adventures, only instead of a nurse, her de facto sidekick here is Alice McKee (Allison Miller), a general’s daughter and an obvious sop to making this film more accessible to the American youth audience. (Producer Bill Kong, whose previous Hero, House of Flying Daggers and Crouching Tiger, Hidden Dragon did just fine Stateside without any Caucasian faces, probably should have known better.) Alice’s functions are largely to get into scrapes from which Saya must rescue her and to form a bond with the loner heroine to draw out her “human” side, and under both circumstances she’s incredibly annoying, to the point where audiences may root for Saya to leave her to get fanged.

It’s not as if Saya doesn’t have other things on her mind, chief among them the return of Onegin (Koyuki), the strongest of all demons (or vampires; the movie isn’t too clear on the distinction). As Saya slashes her way through assorted lesser ghouls and beasts, it’s all prelude for her ultimate confrontation with Onegin, which might have built some tension if Chris Chow’s script included any scenes that actually demonstrated the latter’s power, instead of just having people talk about it. Blood may set some sort of record for most ineffectual main baddie in a genre film; for such a supremely evil being, Onegin doesn’t do anything on screen except kill one poor sap in an early moment. Mostly, she just stands around looking glamorously villainous, like a supermodel (which Koyuki used to be) with a bad attitude and extravagant ideas about wardrobe. On the other hand, she doesn’t fare as badly as the supporting characters played by British and American actors, who are uniformly awful (even the usually dependable Liam Cunningham from Dog Soldiers and The Card Player) and awkward, like the white bit players who used to show up in Jackie Chan and latter-day Godzilla flicks.

Directed by Kiss of the Dragon’s Chris Nahon with more attention paid to camera filters than to story, character or basic coherence, Blood: The Last Vampire doesn’t even satisfy on the basic level of a mindless action vehicle. Asian martial-arts veteran Corey Yuen may have applied his usual skill at fight choreography, but you’d never know it because with one exception, all the clashes are visually sliced and diced worse than any of Saya’s foes, to the point where you can’t follow what’s going on and quickly cease to care. A further distancing effect is created by the obviously computer-generated blood shed by Saya’s sword, which is nonetheless not quite as phony-looking as the digital monster that fights the heroine through a series of setpieces, two of which are knockoffs of key sequences from Underworld: Evolution and Wanted. That’s really Blood: The Last Vampire in a nutshell: a lackluster imitation with no guts of its own.