Reviews: THE INVISIBLE and WIND CHILL 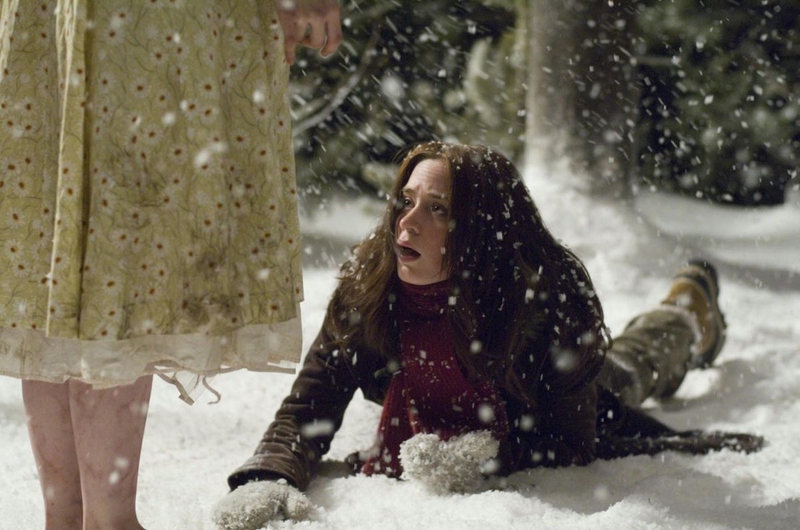 Editor's Note: This was originally published for FANGORIA on April 27, 2007, and we're proud to share it as part of The Gingold Files.

Another Friday, another…pair of studio genre releases given no advance screenings for the benefit of reviewers. The syndrome that has become the recent bane of horror-movie critics has now been applied to The Invisible, a high-profile, long-hyped (and -delayed) Hollywood Pictures release, and Wind Chill (pictured above), which Sony is tossing out in 42 theaters scattered across the U.S. under the TriStar banner, in a token gesture before the film’s no doubt soon-to-be-announced DVD debut. Perhaps it’s due to low expectations brought on by their unscreened status (and the generally low quality of such pictures so far this year), but both movies struck me as not half bad, and certainly better than stuff that has been previewed for journalists in recent months.

The Invisible, based on a Swedish thriller I haven’t seen and directed by Blade scripting veteran David S. Goyer, is a more pensive and far less flashy exercise than those sword-swinging vampire epics, and a step up from his debut at the helm of Blade: Trinity. It’s also remarkably consistent given what was evidently a problematic postproduction period; besides the multiple release-date changes, the creepy/expositional hospital patient (played by veteran Jack Donner) seen in the trailers reportedly wasn’t part of the original cut that was test-screened a year or so back, and nor does he show up in the release version. Just as well, because the story on view pretty much speaks for itself, as teenaged Nick Powell (Justin Chatwin from War of the Worlds) runs afoul of a group of hoodlum classmates, who beat him up in the woods and leave him for dead. But he’s not quite deceased, and he finds himself an earthbound spirit fated to walk among the living, unable to communicate with anyone to let them know where his slowly expiring self is lying.

Goyer and scripters Mick Davis and Christine Roum sprinkle a few effective grace notes through the story, particularly a nice bit involving a bird through which Nick realizes the specifics of his predicament—not as on-the-nose creepy as that hospital patient, but more satisfyingly subtle. More obvious are the ways in which Nick “interacts” with others—from those who assaulted him to his friend Pete (Chris Marquette), who was on the scene but has been cowed into keeping silent, to his domineering mother (Marcia Gay Harden)—railing at them with overly literal dialogue. As he’s unable to take action of his own, nor to inspire others to it until late in the proceeding, the role becomes a limited one, despite Chatwin’s game attempts to invest it with urgency.

The most affecting characterization, in fact, is that of Annie, the ringleader of Nick’s victimizers played by Margarita Levieva. She turns out to be a troubled girl for familiar reasons, but because she’s in more of a position to do something about her situation, her journey through the story becomes more compelling than Nick’s, and Levieva makes the most of the role. Her scenes provide the majority of the tension in The Invisible—which, like the recent Premonition, is really a drama with paranormal trappings rather than a supernatural thriller. As such, Goyer tells his tale realistically and straightforwardly, albeit with a few too many pop/rock songs on the soundtrack to nudge the emotions along, and while The Invisible’s pleasures are modest, they’re definitely present.

The same goes for Wind Chill, which no doubt coincidentally follows the same narrative pattern as last week’s Sony release Vacancy: bickering couple on a cross-country drive take the wrong back route, their car breaks down in the middle of nowhere, bad stuff happens. In this case, the unnamed Girl (Emily Blunt), who needs a Christmas-vacation lift from college to her home in Delaware, answers a ride-share ad posted by the similarly unnamed Guy (Ashton Holmes). She’s moody and he seems a tad strange, and may have even manipulated the whole scenario to get some time alone in his vehicle with her; why else would he take a “shortcut” off the main highway onto a lonely, snowy road? Before she can get to the bottom of his behavior, they’re forced into an accident by another driver who then speeds off, leaving them stranded to deal with each other, the encroaching cold…and strange figures that begin appearing out of the wintry darkness.

The ingredients of Wind Chill are familiar, but the specific recipe served up by scripters Joe Gangemi and Steven Katz remains just on the right side of plausible, and the relationship between the two protagonists is effectively prickly without either one descending into obnoxiousness. British actress Blunt, who stole scenes in The Devil Wears Prada and almost keeps her native accent tamped down throughout, holds the screen well, while Holmes (Viggo Mortensen’s son in A History of Violence) invests the Guy with enough ingratiating aspects to make up for the fact that he’s something of a stalker. In a departure from many scenarios like this, neither one is obviously made out to be the hero from the start; they’re just a couple of kids who find themselves having to work together and overcome their differences to survive.

Despite a large percentage of the movie taking place in and around the stranded car, the leads and director Gregory Jacobs insure that things don’t bog down or become too claustrophobic. Jacobs opts for a low-key, spooky approach, eschewing CGI flash and in-your-face shocks, and he’s given ace assist by cinematographer Dan (Silent Hill) Laustsen, working partially on locations that are clearly not the intended Pennsylvania but sure set the right mood, and composer Clint (The Fountain) Mansell. Overall, though, Wind Chill breaks no new ground in terms of subject matter or its presentation, with the result that the movie maintains a moderate level of tension that doesn’t break out into serious scares. It’s easy to admire the professionalism that went into making it, even as one might wish that a few more chances had been taken to make it stand apart from the many similar features that have preceded it. I hate to suggest that Sony might have taken the right approach to its distribution, but Wind Chill, its widescreen imagery notwithstanding, is the kind of film that will probably work just as well viewed on TV late on a winter night as it does on a theater screen. If a movie can be described as “comfortably creepy,” this is a good example.