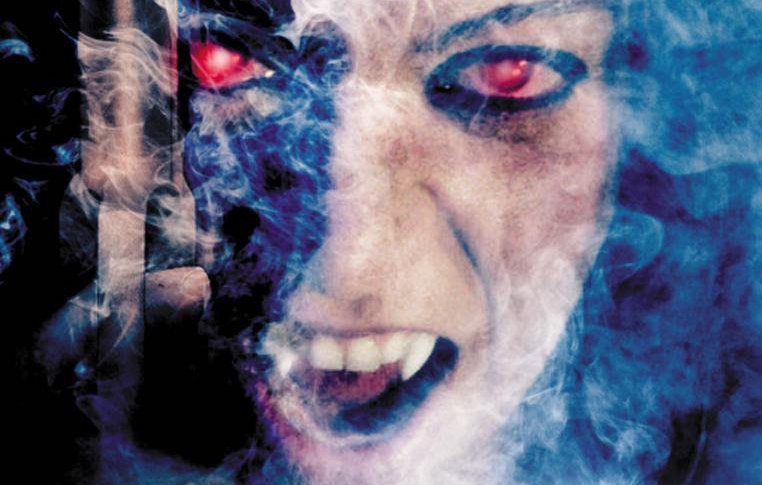 Editor's Note: This was originally published for FANGORIA on November 11, 2003, and we're proud to share it as part of The Gingold Files.

What’s more impressive—the fact that the moviemakers behind Strange Things Happen at Sundown manage to sustain it through a 138-minute running time, or that they’re able to keep the DVD’s audio commentary fresh and fun for the same length? The New York area-lensed Strange Things grew (and grew and grew) out of a short project to become a shot-on-video epic stocked with vampire mobsters, a bloodsucking couple on the run, their born-again hostage, a mysterious slayer, the Reaper himself, his housewife spouse who’s prone to severe mood swings, lots of scantily clad girls, amusing tough-guy dialogue and plenty of graphic violence (which occasionally tips over the line between scary and sadistic). While the movie does feel longish overall, it’s hard to think of a subplot that could be easily lost, and the commitment and energy of director Marc Fratto and his partners shines through both the feature and the commentary.

During one of the quieter moments, a Strange Things participant says, “This is…right out of Dark Shadows, the vampires talking about being vampires.” Sleepless Nights, another New York-centered video feature, is described by its writer/director William Hopkins as a homage to Shadows, and as “a softer kind of Gothic melodrama.” While his intentions and some of the acting are good, Sleepless, unfortunately, is just what you’d expect from those descriptions: a movie in which talk takes precedence over action. Which is not in itself a problem, but neither the characters nor the storyline (involving a government anti-vampire squad seeking to destroy an undead overlord, a bloodsucker who’s on the side of good and a woman seeking to make the dark transformation) are sufficiently compelling. The movie has its moments, but its best action is an early brawl between agents and vampires; some of the subsequent mayhem is conveyed through frankly silly-looking CGI.

Like Strange Things, Sleepless was shot on digital video, and both projects were filmlooked for their fullscreen DVD releases (the former from Brain Damage, the latter from MTI). Strange Things looks better, sporting a generally crisp image that holds the colors and blacks well; occasional outdoor scenes are a tad overexposed and there’s artifacting and grain in the darker moments at times, but it’s overall a satisfying presentation (with crisp two-channel stereo sound). Sleepless, which to be fair has many more scenes set at night or in gloomy interiors, has more artifacting in evidence, as well as pixilation resulting from the filmlook process. The presentation retains a decent amount of atmosphere, however, with a good mono soundtrack.

The first sound you hear during the Strange Things commentary is that of a champagne cork popping, and what follows is a well-liquor-lubricated talk between Fratto and co-producers Steve “Gonzo” Gonzalez, Brandi Metaxas and Frank Garfi, along with a couple of the actors. As expected, there are plenty of rowdy, occasionally profane wisecracks along the way, but also a wealth of real production information. This group has a behind-the-scenes story for every scene—and if not, they find something else to discuss. Even a simple shot of a setting sun occasions a lengthy, amusing discussion; the casting process and dilemmas are a frequent subject, plus the many obstacles faced by the team during the shoot. Some of the tales might make you laugh in spite of yourself, as when they recount that a dog living in one house location was terrified rather than disruptive—or as one of the group puts it, “Instead of the dog ruining the shot, the shooting ruined the dog.” We even find out who in the cast got lucky behind the scenes, thanks to the use of a “hookup bell.”

Only Hopkins (who also wrote the original script of Fango Films’ Children of the Night) is present on the Sleepless commentary, but keeps the talk up through most of the running time. As on Strange Things, the discussion frequently centers on how the production team made do with limited resources, though Hopkins takes a more serious approach. He admits that this, his directorial debut, was in some ways a learning-on-the-job experience, noting time-saving measures he applied along the way and the many shots enhanced with PhotoShop in post. In addition, he takes time to discuss the development of the script, pointing out how the creation of the characters grew out of storytelling necessities.

Hopkins’ monologue is supplemented with a making-of featurette in which he and various other contributors share their thoughts, most of them by-now-typical observations about low-budget moviemaking. We also get glimpses behind the scenes and at auditions (though voiceover plays on top of them), along with character sketch/photo comparisons, before-and-after CGI scenes and poster art samples. The director’s comments are most notable on the latter, as he explains that the early one-sheets were a “flag for the cast and crew to rally around” and also helped him secure additional funds during production.

Additional supplements on Strange Things include a pair of music videos, an animated still gallery (a nice mix of behind-the-scenes shots and makeup photos) and collections of outtakes and deleted scenes, a number of which are pretty funny. Like the feature, the trimmed bits contain moments that are both amusing and quite politically incorrect; one spotlights a genre-name-dropping youth of the type seen too often in horror films these days, though this one makes a comment about Godzilla that you’re unlikely to have ever heard before or will hear again in a movie.