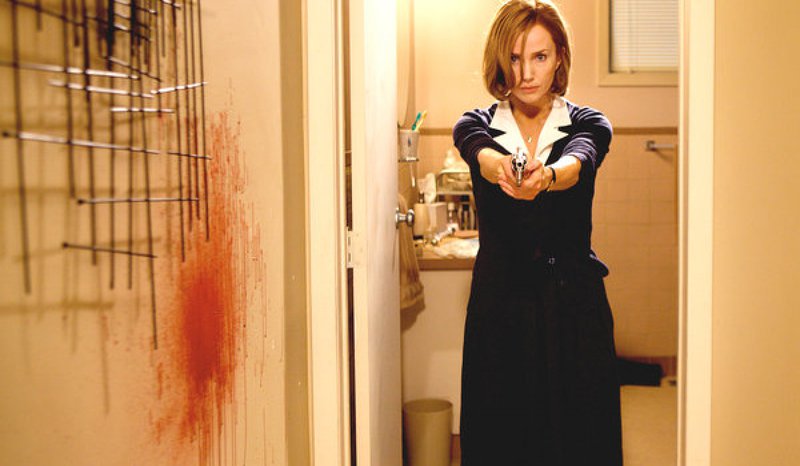 Editor's Note: This was originally published for FANGORIA on May 11, 2012, and we're proud to share it as part of The Gingold Files.

For director Darren Lynn Bousman, the long-delayed Mother’s Day was a conscious effort to step away from the torture horror of his Saw sequels into more character-based territory. But the new(ish) movie does have one thing in common with Saw II; like that follow-up, this one had its origins in a previously unrelated project.

Just as Bousman’s spec script The Desperate was reworked into the second in the Jigsaw saga, so Mother’s Day, as is discussed on Anchor Bay’s DVD and Blu-ray editions, began as a fact-based Scott Milam screenplay called Wichita that Bousman had signed on to helm. When offered Mother’s Day, after first turning it down, he decided to infuse Wichita with elements of the 1980 cult shocker and come up with something new, and less outrageous and over-the-top. (Though it should be noted here that despite what Bousman and everyone else involved with the redux would have you believe, the original Mother’s Day wasn’t a Troma movie. It was made independently by Charles Kaufman, brother of Troma’s Lloyd, and released theatrically by United Film Distribution; Troma only came into the picture in the ’90s, when it picked up the video rights.)

Anyway, this operation was a success, thanks in no small part to Mother herself, i.e. Rebecca De Mornay; she makes the movie’s strongest impression, despite being a bit of a latecomer to the action. First, we meet her sons in an opening that’s straight outta Reservoir Dogs: Speeding away from a bank robbery gone wrong, one of them (Matt O’Leary as Johnny) wailing and bleeding from a bullet hole in his stomach. Desperate for a place to hole up, they head back to the old family home, not knowing that Mother has lost it in a foreclosure and the new owners are throwing a party in the furnished basement. Quickly getting over their surprise at discovering the new residents, hotheaded Addley (Warren Kole) and steadier but still scary Ike (Patrick Flueger) take everyone hostage, forcing George (Shawn Ashmore), a guest who happens to be a doctor, to treat Johnny’s wound while they await Mother’s arrival.

The particulars of the opening act are familiar but punchily staged, and things get cranked up several notches when Mother appears at the door, accompanied by daughter Lydia (Deborah Ann Woll). Cool and sharp as an icicle, Mother’s so calm and composed that her presence almost suggests hope for a comparatively peaceful, bloodless resolution to the situation. Yet there’s a menace lurking below the surface of De Mornay’s delivery that makes it clear things will get worse before they get better—not to mention that their captives, also including new homeowners Beth and Daniel Sohapi (My Bloody Valentine’s Jaime King and The Grey’s Frank Grillo), all seem to have secrets and hidden motivations that will only lead them deeper into hot water.

One of the key revelations is easy to guess, but for the most part, Milam smartly clicks off a series of reversals and betrayals that make sense and keep the suspense bubbling, and there are just enough carry-overs from Kaufman’s film (Addley still hates disco, the siblings discuss “Queenie,” etc.) to legitimize this as a remake. As opposed to its predecessor, however, Milam and Bousman here successfully take the tack of humanizing their villains. Not that our sympathies go to them, but by making the criminal family more than just vicious monsters (who insist on loyalty, even as their victims turn on each other), the filmmakers add dimension that elevates this above the typical home-invasion potboiler. That’s a particular advantage given that, in the years since this movie’s 2009 production, Kidnapped and other thrillers have utilized some of the same tropes, and Mother’s Day also anticipates elements of such 2012 titles as the Tribeca Film Festival premiere Replicas and even Patrick Rea’s Nailbiter (with which it shares the backdrop of an impending Kansas tornado).

Beyond De Mornay, the strongest performances are given by Ashmore, whose George forges something of a bond with the troubled Lydia, and King and Flueger, who share a tense back-and-forth when Ike takes Beth on a cash-acquiring drive. Separating these “couples” into their own mini-dramas allows Bousman and Milam to get out of that claustrophobic basement on a regular basis and keep the pace moving throughout the 108-minute running time. That lengthy but not draggy duration also gives Bousman and Ashmore plenty of time to cover all aspects of the movie on the Blu-ray/DVD audio commentary, the sole significant extra supporting the discs’ effectively hard-edged 2.40:1 transfer.

Although Mother’s Day contains a number of graphically gory and shocking moments, Bousman prefers to view and discuss it as an intense drama, noting repeatedly his desire to tell a story about people, and not just the violence they commit. He also defends the film on a plausibility basis, making a case that his imperiled unfortunates act the way real folks would in the heat of the moment, not the way viewers sitting safely at home think they might. And at many points of their talk, Bousman and Ashmore reveal the copious footage that got trimmed from the director’s original four-hour (!) cut of Mother’s Day. Gone, we learn, are entire characters, death scenes and confrontations (the loss of one resulting in a continuity lapse involving a villain’s facial injuries), as well as a sequence featuring erstwhile Leatherface Andrew Bryniarski. Some of the deletions are understandable (seeing Addley bashing someone with a barbell while singing “Mama Said Knock You Out” might have been a bit much), but it’s a shame we aren’t given a chance to view them out of context; not a single one, disappointingly, is included as a supplement.