Reviews: DEAD SUSHI and ZOMBIE ASS: TOILET OF THE DEAD 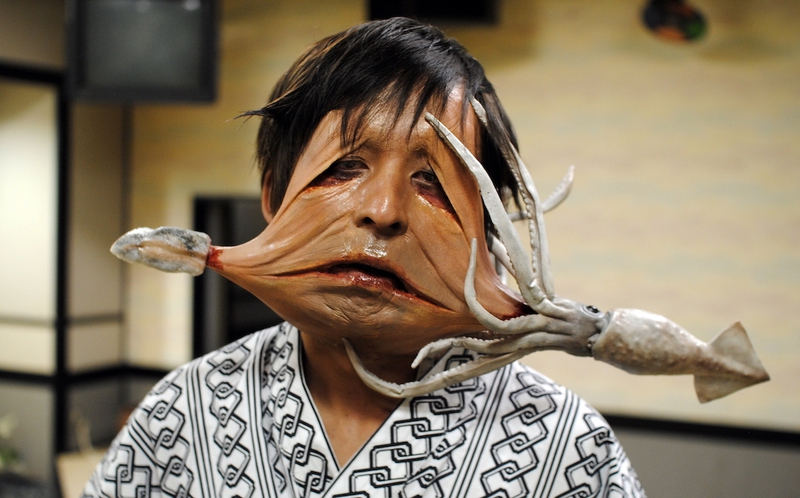 Editor's Note: This was originally published for FANGORIA on July 24, 2012, and we're proud to share it as part of The Gingold Files.

It’s rather appropriate that the titles of the two latest features from Japanese naughty boy Noboru Iguchi be titled Dead Sushi (pictured above) and Zombie Ass: Toilet of the Dead, as they both mix fresh and tasty moments with the same old shit.

Dead Sushi (which had its world premiere at Montreal’s Fantasia festival) and Zombie Ass (which played at both Fantasia and New York City’s Japan Cuts fest) are very much in the spirit of previous over-the-top Iguchi exercises like The Machine Girl and RoboGeisha. Dead Sushi, though, is a comparatively tame entry in his filmography, with little in the way of sexual material and fairly restrained gore; you could almost say it’s an Iguchi movie for the whole family. The moniker is a bit of a misnomer, as it’s living sushi that poses the threat, and is opposed by Keiko (Rina Takeda), the latest in a line of young, pretty Iguchi heroines who can kick serious butt.

As the story opens, however, Keiko aspires to be nothing more than a great sushi chef, following in the footsteps of her father (Jiji Boo). But when the pressure of his hyper-rigorous training becomes too much for her, she runs away and takes a hostess job at a rural inn, where her inexperience makes her a target of ridicule for both her co-workers and visiting businessmen from Komatsu Pharmaceutical. They’ll learn to appreciate her abilities when a disgruntled former Komatsu employee turns up, transforming the sushi into bloodthirsty little monsters.

The girl who kicks butt in Zombie Ass is Megumi (Arisa Nakamura), and in this flick, the butt kicks back. Megumi is part of a five-kids-in-a-van scenario that takes them out to the country, where one of them has to make use of a filthy outhouse. As she strains quite dramatically to drop her deuce, a ghoulish face (that of Iguchi regular Demo Tanaka) appears in the pool of fecal matter below her, and he rises out of the filth to attack her. (This may sound like the nadir of low-rent gross-out, but do bear in mind that a very similar scene appeared in the Oscar-winning Slumdog Millionaire.) As the poop zombie advances on the terrified group, he’s surrounded by a cloud of flies à la Pig-Pen from Peanuts, a neat visual gag that unfortunately doesn’t carry over when more ghouls turn up to join him, precipitating every derriere-, crap- and fart-oriented gag Iguchi and his co-scripters Jun Tsugita and Ao Murata can think of, including one that explicitly recalls The Human Centipede.

Unlike that self-impressed wallow in wannabe transgression, Iguchi’s features possess no pretensions and just wanna have fun. Nor does he, in Zombie Ass, overwork the fecal fixation, as the scenario eventually comes to concern the results of some mad science, which suggest that the director could have taken a cue from David Cronenberg’s original name for Shivers and subtitled his movie Orgy of the Butt Parasites. (And where films of that very limited subgenre are concerned, this one certainly kicks the tuchus of Dreamcatcher.) Fellow Tokyo gore policeman Yoshihiro Nishimura contributed the makeup and creature FX to both films, supplying typically fine work on clearly limited budgets, and augmented by CGI that’s not nearly as convincing, but whose cartooniness is all of a piece with Iguchi’s not-to-be-taken-seriously approach.

A little of the director’s abandon-all-subtlety tactics can go a long way, especially if you’ve seen a few of his films before, and his characters’ frequent descriptions of bits we’re seeing or have just seen, in an attempt at an extra laugh (“I just killed a zombie with my butt!” shrieks a Zombie Ass girl who has just killed a zombie with her butt), can become laborious. Yet Iguchi’s lack of the self-consciousness that plagues so many gross-out horror/comedies is an asset. There’s no calculation behind his excesses; he just truly loves this stuff, and has come up with a number of new and inspired moments for both Dead Sushi and Zombie Ass. And in the former, he’s got a strong ally in Takeda (who also starred for him in the TV series The Ancient Dogoo Girls), a spunky, enthusiastic martial-arts up-and-comer whose ability to keep a straight face while kung-fuing vicious bits of tuna and rice makes her a perfect collaborator.