Reviews: ALONE WITH HER and SAM’S LAKE 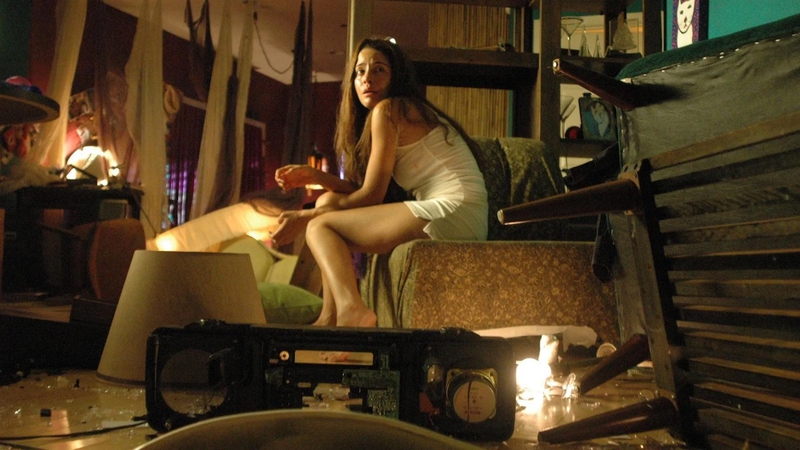 Editor's Note: This was originally published for FANGORIA on May 1, 2006, and we're proud to share it as part of The Gingold Files.

Alone With Her (pictured above) opens with a title card that offers statistics on how common stalking has become in this electronic age, but part of what makes the movie work is how specific and personal its plotline is. Writer/director Eric Nicholas‘ second feature, now playing the Tribeca Film Festival, is a form-follows-function modern-video movie in the Blair Witch mode, with everything seen through cameras that are integral to the story—only here, the point of view is that of the threatening antagonist instead of the imperiled victim.

Colin Hanks gets top billing and makes a creepy impression as Doug, a bookish and awkward young man who breaks into the house of a woman he’s become fixated on, installing tiny hidden video cameras to watch her every move. But the movie belongs to Mexican actress Ana Claudia Talancón, who plays Amy, the object of Doug’s twisted affections who is literally center screen throughout. The movie’s events are presented entirely from the “point of view” of those tiny unseen devices, plus a camcorder Doug carries in a bag and a body-cam he wears when he goes to visit a coffee shop and other places where he knows Amy will be. Inevitably, he and the audience wind up observing Amy showering in the bathroom and pleasuring herself in bed, and Nicholas toys with implicating the audience in Doug’s voyeurism.

Yet it’s to his and his cast’s credit that Alone With Her doesn’t invite the audience to identify with Doug, or to get off on witnessing Amy’s naked vulnerability. Throughout the movie, Nicholas punctuates the images with bursts of static and interference that remind us we’re watching someone else invade Amy’s privacy. He receives great assist from Talancón, who maintains continuous sympathy for Amy without straining for it; her naturalistic performance invites the audience to share her point of view and not that of the cameras. She also makes it believable that Amy could become attracted to Doug, who woos her by helping her through unpleasant situations that he himself has manipulated, which she doesn’t suspect he’s been setting up.

Hanks is equally convincing as the techno-nerd from hell, who has no problem making the object of his desire suffer as long as he can make a good impression by coming to her rescue. Not surprisingly, he has little patience for those who might stand in the way of the relationship, though Nicholas doesn’t entirely take this facet of the story in the direction one might expect, and Doug’s actions in this regard point up the inherent misogyny of his character. The writer/director builds tension slowly, letting the unsettling undercurrents speak for themselves until things start going from bad to worse. And the movie’s very status as an independent production helps sustain suspense—you know the story may not be heading for a tidy Hollywood-thriller ending.

Alone is the kind of movie one goes to festivals for, an unheralded but well-made feature that takes a new and updated look at the genre. It’s the most topical and off-Hollywood suspense/fright entry in this year’s Tribeca Midnight lineup (though I’ve yet to see France’s Sheitan), which has proven fairly conservative by festival standards. The Gravedancers and Hatchet are comparatively conventional scarefests, albeit done with down-and-dirty grit along with sufficient panache and humor respectively to elevate them above many of their ilk. But what is one to make of Tribeca’s inclusion of Sam’s Lake, which applies studio-movie slickness to thoroughly tired material?

This is yet another terrorized-young-people-in-the-woods movie, one in which the woods make much more of an impression than the young people. In contrast to his harsh, high-contrast work in Gravedancers as well as the Saw films, cinematographer David A. Armstrong captures the titular location, the surrounding forest and Paul McCulloch’s attractive/eerie rustic production design with lush colors that make them inviting by day and threatening by night. The images are almost eye-catching enough to distract from the fact that little of dramatic interest is happening within them.

First-time feature writer/director Andrew Christopher Erin based his story on a true case in which a disturbed young boy was taken from his parents and institutionalized, only to escape years later, slaughter his entire family and disappear. Into a rural area where just such a scenario has taken place arrive Sam (Fay Masterson) and several of her friends, there to help Sam get over her father’s recent death in a hunting accident. As if that tragedy wasn’t upsetting enough, ominous-looking locals giving them the eye and missing-persons posters in the general store suggest that this might not be the happiest place to take a vacation, though Sam’s friend Kate (Sandrine Holt) finds potential romance with an old friend of Sam’s, a hunky Brad Pitt type named Jesse (William Gregory Lee). Sure enough, someone lurking in the trees eventually starts assuring that not all of the group will make it back home alive.

The key word there is “eventually,” as the movie bogs down in lengthy scenes between the group, who have nothing of consequence to say to each other and spend at least half the running time not saying it. They do ultimately get around to paying a nighttime visit to that slaughtered family’s abandoned house (a trip on which no one thinks to bring a flashlight), whereupon the discovery of an old journal cues the start of the murder spree. The ensuing action amounts to little more than a lot of running through the woods and creeping through another dark house, leading to death setpieces which are too generic to be suspenseful and not bloody enough for the hardcore horror crowd.

Erin does come up with one effective story twist that sets up a potentially intriguing and clever variation on the typical slasher storyline that hasn’t been seen before. Unfortunately, instead of exploring this idea to its fullest, the narrative falls right back into running-through-the-woods mode again. The cast is attractive and personable, and it’s a shame they’re given little to do but go through the motions, on the way to a conclusion where, in an attempt to subvert audience expectations, Erin sets up one final jolt, only for nothing to happen. Too bad that’s common to too much of what comes before it.