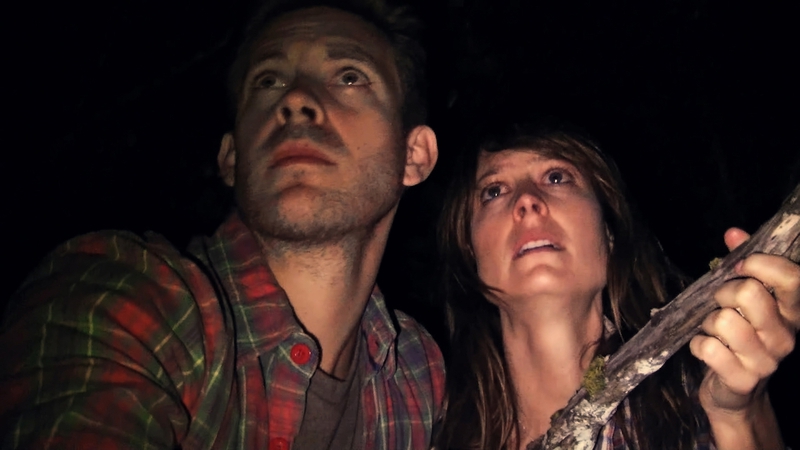 Editor's Note: This was originally published for FANGORIA on July 30, 2013, and we're proud to share it as part of The Gingold Files.

Considering that the Patterson-Gimlin film clip of a wandering Bigfoot is perhaps the most famous bit of amateur monster footage in history, it’s surprising that a modern vérité horror film hasn’t directly spun off from it until now. And just as surprising is that the man who has done so is Bobcat Goldthwait.

Having successfully transitioned from comic actor to moviemaker, Goldthwait makes a change of pace with Willow Creek (which had its Canadian premiere at Montreal’s Fantasia festival). It’s a departure from the savage social satire of World’s Greatest Dad and God Bless America; though there is quite a bit of humor in Willow Creek, it’s of a gentler kind, and is used to lay the groundwork for serious scares in the movie’s second half. Goldthwait may be treading familiar ground here, but he succeeds in stirring up some of the best terror-in-the-nighttime-woods creeps since The Blair Witch Project.

One of the key complaints about the many found-footage flicks to follow in Blair Witch’s wake is a lack of sympathy for the people we follow along with, an issue that Goldthwait easily avoids in Willow Creek. Jim Kessel (Bryce Johnson) and Kelly Monteleone (Alexie Gilmore) are a likable young couple on a trip to the Northern California woods to retrace Patterson and Gimlin’s steps and find out if the mythical man-monster actually exists, capturing it all on video. Jim is the man on a mission while aspiring actress Kelly is happily along for the ride, and the fact that both performers are drawing somewhat from their own lives (Johnson is apparently a Bigfoot enthusiast in actuality) accentuates their easy onscreen chemistry.

Upon arriving at Trinity National Forest (the “Bigfoot Byway”) and the little town of the title, Jim and Kelly encounter a string of Sasquatch kitsch ranging from building-length murals to “Bigfoot burgers” served between foot-shaped buns. These occasion plenty of good chuckles, and amusing riffing by the duo, though they and Goldthwait stop short of poking fun at the eccentric locals the couple meet and capture on camera. From the owner of Bigfoot Books to a guy who’s written a song about Patterson and Gimlin to a ranger who tells a sad/freaky story about his dog, these folks are treated matter-of-factly, without condescension. Inevitably, a couple of them don’t cotton to city folks encroaching on their turf, the first sign that Jim and Kelly are potentially headed for trouble.

Once they head into the trees a little before the halfway point of this tight 79-minute feature and pitch camp, Goldthwait leaves the humor behind, slowly building an unnerving atmosphere of sylvan isolation. Eschewing the degraded color and rough imagery employed by many handheld fright features in the name of authenticity, the director and cinematographer Evan Phelan deliver sharp, colorful images with a minimum of distracting shaky-cam. Then night falls, the attractive foliage is shrouded in impenetrable darkness, the distant funny noises start and Jim and Kelly begin to consider that maybe this trip wasn’t such a good idea after all. Willow Creek’s pièce de résistance is a 19-minute single take inside their tent, trapping the two within the frame as they take an emotional trip from curiosity to outright terror, the audience slowly but surely sharing their fear.

Perhaps there should be a SPOILER ALERT here, but it’s worth noting for monster-movie fans that Willow Creek is much more an exercise in suggestion than creature-feature thrills. Those who want to witness a towering hairy killer manhandling helpless humans are advised to look elsewhere—though the many Sasquatch schlockers to have appeared in recent years don’t pack the quiet chills of Willow Creek’s best moments. In fact, part of the eeriness derives from the fact that neither Jim and Kelly nor the viewer knows exactly what’s out there for the bulk of the movie, with little hints dropped that perhaps it is (or they are) something other than the legendary beast. While playing on our familiarity and expectations regarding the famous critter, Goldthwait demonstrates an awareness that just because you’re dealing with Bigfoot doesn’t mean you have to get heavy-handed about it.