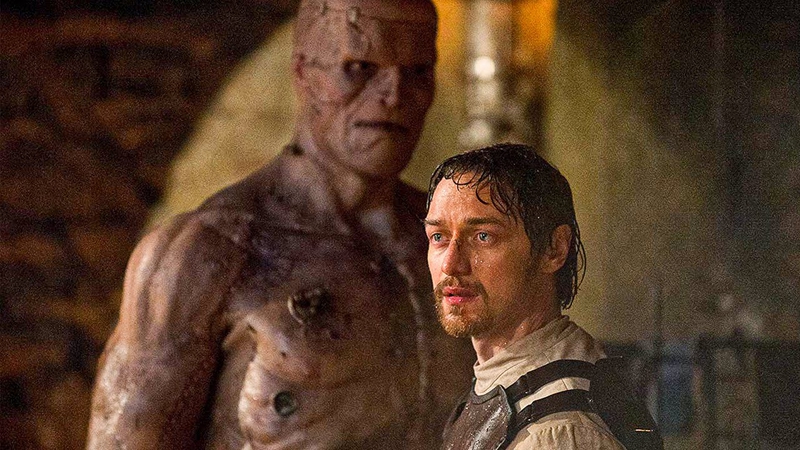 Editor's Note: This was originally published for FANGORIA on November 25, 2015 and we're proud to share it as part of The Gingold Files.

Victor Frankenstein is kind of a stitched-together creature itself, mixing up tones and styles with a crazed abandon reflecting that of its title character—at least, the one we see in this latest take on Mary Shelley’s masterpiece.

As played by James McAvoy, previously seen on the big-budget screen overseeing another group of überhumans in the X-Men movies, Victor F. is a mad scientist indeed, practically frothing at the mouth as he espouses his theories and ambitions regarding the creation of life. That doesn’t make him very popular at parties in 19th-century London, but it does make him an entertaining protagonist—though he’s not the central character, despite his title status. Max Landis’ script instead tells the story from the point of view of Igor, who is introduced as the nameless, pitiful, hunchbacked punching bag at a seedy circus, played quite sympathetically by Daniel Radcliffe.

Wouldn’t you know that in his spare time from being a put-upon clown, he has become a brilliant self-taught doctor, which catches Victor’s eye when he visits the circus in search of spare animal parts. Recognizing the young man’s talent, he effects his escape in an over-the-top action sequence, complete with slow-motion bits, that’s typical of director Paul McGuigan’s showy approach. (His coolest visual trick is a sort of X-ray effect in which, taking the lead characters’ mental point of view, we see anatomical diagrams overlaid on various people.) Spiriting his new friend back to his lab in an abandoned warehouse, Victor sets him up as his new apprentice and gives him the Igor name, after a former assistant who has, ahem, gone missing.

Then there’s the big bonding moment, in which Victor cures Igor of his hunched-over affliction. Turns out the poor guy is actually suffering from a freakishly large cyst in his back, and Victor orally siphons out the fluid in a scene so bubbling over with subtext, you get the feeling that’s not the only humping that’ll go on between the two of them. Perhaps to distract from that potential story course, the movie gives Igor a love interest, Lorelei (Jessica Brown Findlay), a trapeze artist who is also rescued from the cruel carnival (by an aristocrat who “enjoys the company of men” and needs a beard) and never serves more than a functional part in the proceedings.

Really, Victor Frankenstein is a chaste if extravagant bromance of sorts, focusing on the developing master/pupil relationship between the doctor and Igor, who eventually develops misgivings about Victor’s crazed ambitions. The monster stuff is secondary; in fact, the man of many parts who has long been the focus from Shelley on down, while the subject of much discussion and diagramming, only actually makes his appearance during the lengthy climactic sequence. Prior to that, the creature quotient is fulfilled by “Gordon,” the result of Victor’s pilfering and stitching together of those animal remains, a sort of chimp/hyena/et al. hybrid that, unsurprisingly, reacts with great, violent ingratitude to being given the spark of life.

Gordon is a practical-FX creation in many shots, and it’s always fun to see a modern genre film go that route in these CGI-happy days. The physical production, in fact, is the most striking thing about Victor Frankenstein. Although some of the wide-shot environments are unmistakably digital, production designer Eve Stewart has done an excellent job with her assorted constructions, particularly Victor’s marvelous mad lab and the Scottish castle where the final creation/rampage sequence unfolds. McAvoy and Radcliffe inhabit these settings with verve and enthusiasm, and the byplay in their performances is the picture’s most consistent element.

The tone is another matter. There are several different ways to approach the Frankenstein story, and McGuigan and Landis try a little bit of all of them, from ruminations on the clash between science and religion to high-powered sci-fi/action to flat-out camp and humor (someone even calls the doctor “Frankensteen,” cf. Mel Brooks). The result is that the tension that should build toward Victor’s ultimate experiment doesn’t take, and while moments have their individual pleasures, the movie never fully engages. And really, did Victor have to be yet another classic character reimagined and redefined by a past trauma and familial baggage he has to psychologically overcome? Isn’t it enough that the guy just loves his work a little too much?

By now, there have been so many adaptations of Shelley’s novel that you can’t blame McGuigan and Landis for trying something different; it’s just that there are too many different somethings in Victor Frankenstein for one movie. Still, if you can open your brain to a Frankenfilm with more goofy/exciting moments than scary or resonant ones, you may get a kick out of it. And there’s this: At least it’s not I, Frankenstein. Or Van Helsing.