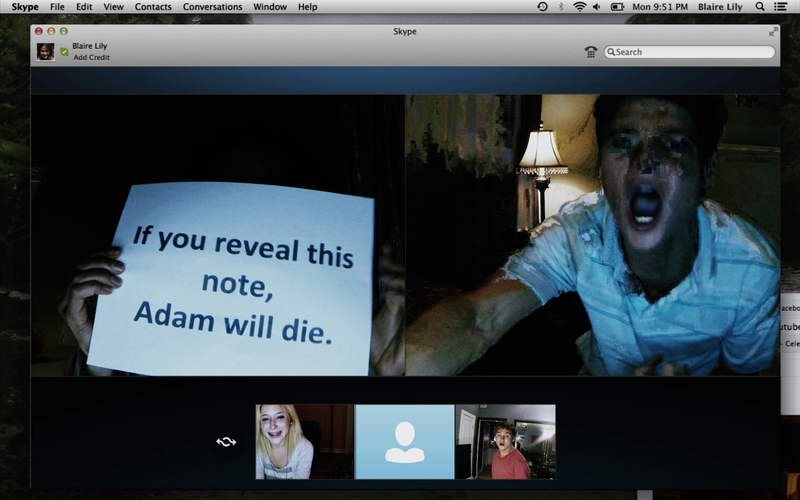 Editor's Note: This was originally published for FANGORIA on July 21, 2014, and we're proud to share it as part of The Gingold Files.

Lumping Cybernatural [later released as Unfriended] in with the usual run of found-footage movies—even to call it a standout example—isn’t quite fair, as it takes the form into different, relevant directions while providing a gripping and scary viewing experience throughout.

The entire movie (a world premiere at Montreal’s Fantasia festival) is “set” on the computer desktop of high-school student Blaire (Shelley Hennig), who is first seen having an intimate Skype chat with her boyfriend Mitch (Moses Storm). She teases him by unbuttoning her blouse, he produces a knife and threatens to cut it off her and she responds with, “You’re sexy when you’re violent”—succinctly summing up the way sexual and violent expressions have become normalized and conflated on-line. The mood is broken when their friends Jess (Renee Olstead), Adam (Will Peltz) and Ken (Jacob Wysocki) log on…along with someone unfamiliar, represented only by a generic icon. At first, this silent participant seems to be a glitch. Then he or she joins the conversation, seeming to know a little bit too much about them, their personal histories and past transgressions.

The most significant transgression is revealed at the movie’s very beginning, as we watch a YouTube video of the gang’s classmate Laura (Heather Sossamon) shooting herself, as well as a bit of the uploaded-video embarrassment that drove her to that act. From there, director Leo Gabriadze and writer Nelson Greaves (the latter also produced with Timur Bekmambetov) tell their story through a series of Skype and text messages, Facebook communications and other on-line interactions—all of which are being monitored and manipulated by the faceless stranger. Whoever it is clearly has an ax to grind against the group, considering them responsible for Laura’s suicide, and is reveling in the opportunity to inflict poetic justice upon those who cyberbullied her to death on the one-year anniversary of the tragedy.

As the gang’s anxiety and desperation build and Blaire opens up one screen after another, attempting to deal with the situation (and some are remotely opened up for her by their tormentor), Gabriadze and Greaves create a thoroughly and creepily realistic cyber-situation in which they’re terrorized via the very apps through which they live so much of their lives. Using all real programs and websites, the filmmakers play on viewers’ familiarity with the onscreen action to engage our empathy; these may not always be the most likable kids, but anyone who has ever had something suspicious or strange turn up on their laptop or desktop can easily relate as Cybernatural pushes those concerns to the nth degree. That relatability is exploited for black humor too, as glitches we’ve all dealt with develop amusing/creepy implications and ironically suggestive song selections turn up on Blaire’s Spotify.

The actors, also including Courtney Halverson as the group’s frenemy and all experienced but unfamiliar faces, have a thoroughly convincing rapport as they first try to figure a way out of the situation (Ken’s a computer wiz, but even that might not help), then turn on each other as their plight leads them to reveal buried resentments and grudges. The way they treat each other in Cybernatural’s second half is almost as distressing as anything the unseen villain does. On that note, Gabriadze and the movie’s visual design team do an excellent job establishing a palpably vindictive and dangerous presence through nothing more than a series of words and images—though part of the film’s constant tension derives from the threat that the bad guy or girl will eventually appear on one of those Skype feeds to inflict some physical damage.

With cyberbullying such an unfortunately common occurrence these days, Gabriadze and Greaves are working with provocative and touchy subject matter here. They rise to the occasion by treating it as serious business with long-ranging consequences, resisting the urge other filmmakers might have felt to tart it up—and trivialize it—with a lot of schlocky horror tropes. Nor are there completely clearcut heroes and villains here, as it’s revealed over the course of the movie that Laura was something of a bully herself. While channeling the anger and frustration many feel over this syndrome, Cybernatural also uses it as fuel for one truly frightening ride. It works great with an audience, where the aforementioned familiarity enhances the shared viewing experience, but it will likely be just as effective—or perhaps even more so—when viewed on one’s own personal device.