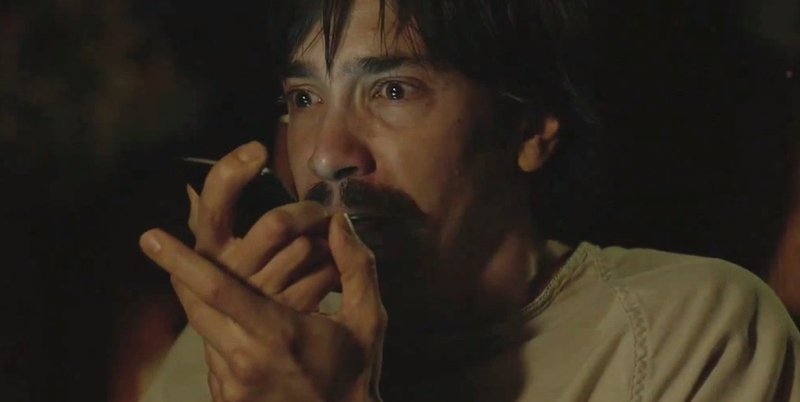 Editor's Note: This was originally published for FANGORIA on September 8, 2014, and we're proud to share it as part of The Gingold Files.

There are a number of problems with Tusk, Kevin Smith’s stab at outrageous horror/comedy, and a good amount of them stem from the fact that Smith doesn’t have a story here, just a situation.

Tusk, a world premiere at the Toronto International Film Festival, concerns a podcast host who travels to Canada to interview a viral on-line celebrity, discovers that person is dead and decides to visit a local eccentric instead. That man takes him captive and subjects him to a horrific and very strange mad-science experiment; meanwhile, his best friend and girlfriend travel north to look for him, enlisting the help of an eccentric local detective. That’s the plot, and I’m really not leaving very much out.

Of course, this sort of twisted genre film doesn’t live on narrative complexity alone; it’s what Smith does, or more to the point doesn’t do, to fill in the gaps that leads to Tusk’s downfall. Smith has always been one of indie cinema’s kings of snark, and his best work, from Chasing Amy to Dogma, has balanced that attitude with either a depth of feeling for his characters or a defined, focused sense of satire. Tusk has neither, suffering from an inability to maintain a consistent tone and any sense of identification with its people. The result is a film that’s smirky instead of scary, suggesting what might have resulted if The Human Centipede had been directed by one of the folks responsible for Adam Sandler’s recent fare.

Our hero is Wallace (Justin Long), who runs the “Not-See Party” podcast with his pal Teddy (Haley Joel Osment); as the film opens, the two have become enamored of a viral video of a kid accidentally inflicting a horrible injury on himself. (The fact that this injury is depicted via a transparently fake CGI gag is just the start of the distancing effect Tusk suffers from.) Wallace decides to trek to the Great White North to interview this new Internet celebrity, only to find he has passed on, but circumstances lead Wallace to discover a new subject: eccentric Howard Howe (Michael Parks), who lives a couple of hours deep into the wilds of Manitoba. When Wallace arrives at Howe’s place, James Laxton’s cinematography and John D. Kretschmer’s production design establish a nice sense of rural Gothic—one that Wallace fails to pick up on until it’s too late, and he has become a prisoner of Howe’s twisted personal mission.

Parks is undeniably well-cast and gives his all to the part, scoring with a lengthy monologue in which he details his obsessions. Once Howe puts his plan into motion, though, Parks’ efforts ultimately can’t do much to elevate a role that remains a one-dimensional nutter, whose mania feels thinly conceived and whose particular fixation comes off as totally random. His desire to surgically turn Wallace into a human walrus is certainly bizarre, but there’s nothing to this goal other than its own weirdness, and while Robert Kurtzman’s makeup FX are technically well-executed, it isn’t fleshed out in any interesting ways on the script level. With Wallace losing the ability to speak following his transformation (the details of which are largely left offscreen), the movie becomes a freakshow that’s neither terribly frightening nor especially dark-comedic, as Smith gives us little reason to care about either of the main players.

That disinterest becomes especially pronounced in Tusk’s second half, as Teddy and Wallace’s squeeze Allison (Genesis Rodriguez) realize something bad has happened and set out to track Wallace down. At this point, Smith abandons Wallace and Howe’s situation so that we can spend 15 minutes or so with Guy LaPointe, a goofy French-Canadian detective played, in one of indie cinema’s worst-kept secrets, by an uncredited Johnny Depp. A vehicle for “satire” of Canadians that doesn’t get much cleverer than making fun of the fact that they say “aboot,” LaPointe just isn’t funny in either conception or execution, and his time-wasting shtick adds nothing to the story Smith is telling; it’s little more than a self-indulgent stunt.

Smith introduced Tusk in Toronto by saying that’s he’s now at “the point in my career where I don’t give a fuck anymore.” There’s nothing wrong with a little iconoclasm; the horror genre thrives on it, after all, but it also depends on being able to give a fuck about the people on screen suffering and making them suffer and trying to rescue them. There is a hint of another level here when Smith flashes back to a scene between Wallace and Allison, in which she chides him for the insensitivity with which he treats his cyber-subjects, accusing him of a lack of empathy. In context, it suggests that perhaps, just perhaps, Tusk is meant as a 101-minute auto-critique of just that kind of attitude. But I can’t say I’m terribly inspired to see the movie again to figure it out for sure.