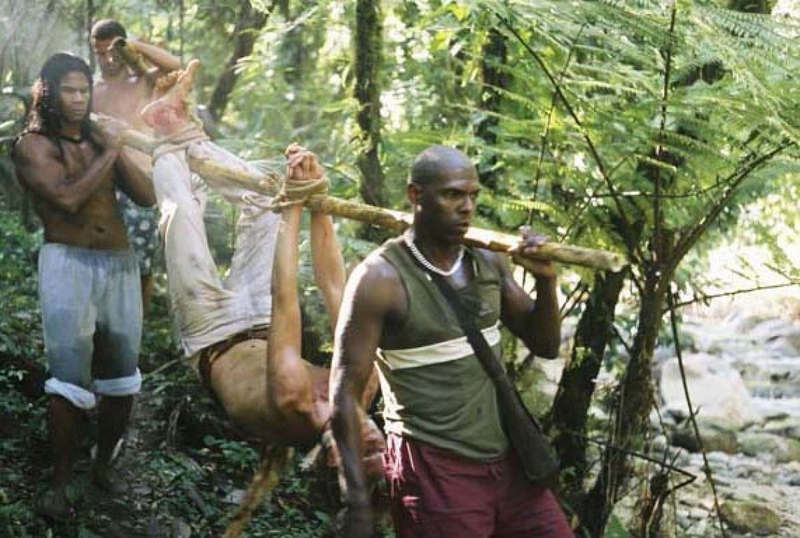 Editor's Note: This was originally published for FANGORIA on November 27, 2006 and we're proud to share it as part of The Gingold Files.

Back when the slasher-film craze of the late ’70s and early ’80s was in full flower, Roger Ebert coined the term “Dead Teenager Movies” to bluntly describe their basic content and intentions. Today, the newly revived youth-horror trend has given rise to a burgeoning subgenre of what could be called “Dead Tourist Movies,” in which groups of young people venturing into unfamiliar climes get into deep and violent trouble. The very title of Turistas expresses the stranger-in-a-deadly-land conceit, and the first release by the new Fox Atomic banner is, for this writer’s travel money, a better and scarier film than Hostel, the highest-profile Dead Tourist Movie thus far.

It’s not giving too much away to mention that the fate awaiting the title characters involves unscrupulous organ harvesting, which provides the movie a relatable impact—even if you think such illegal transplants are an urban legend, anyone who has been to the doctor can relate to the icky idea of someone poking around parts of you they shouldn’t. But such a situation is far from the minds of the movie’s protagonists as they venture into the wilds of Brazil on a vacation tour. Their number includes good-looking Alex (Josh Duhamel), equally good-looking Pru (Melissa George), Alex’s cute sister Bea (Olivia Wilde), her equally cute pal Amy (Beau Garrett) and randy Brits Finn (Desmond Askew, a villain in the Dead-Tourist-Movie-of-sorts The Hills Have Eyes) and Liam (Max Brown). Alex is the least entranced by the exoticism of their surroundings—he’s mostly along to look after Bea—which sets him up as the most likely to keep his head and protect the others when things start to go bad.

And bad they go, starting with a well-staged bus accident that leaves them stranded with their fellow passengers in the middle of nowhere. To take their minds off the long wait for the next bus, the friends head down to what appears to be a friendly beachside bar, where they drink, make merry and, in one guy’s case, hook up with a local prostitute. But hangovers can be a bitch, and the group wakes up on the beach the next morning with all their belongings and money and most of their clothes stolen from them. (Points to scripter Michael Arlen Ross for figuring out a way to keep the attractive cast in a minimum of attire for a long stretch of the movie.) As they set out to find help, they discover that the natives who welcomed them the night before aren’t so hospitable now, and that a particular bunch of area physicians want a piece of them—literally.

There’s an unnecessary scene early on designed to show just how evil the head doctor is that succeeds mostly in removing the mystery from his character, and a few other key moments throughout Turistas that are too on-the-nose. Yet there’s a good, relentless bad-to-worse momentum to Ross’ scenario, and director John Stockwell, improving significantly upon his last nasty-things-in-exotic-places adventure Into the Blue, approaches it with a cinematic rawness reminiscent of ’70s horror/suspense fare. The lush jungle locations appear appropriately threatening as captured by Enrique (The Faculty) Chediak’s cinematography, and with the cast performing quite a bit of their own stuntwork, there’s a genuine sense of their characters being in true peril.

A good deal of Turistas proceeds as a tense survival-adventure rather than outright horror, but when the scary moments do crop up, Stockwell doesn’t flinch from them. In particular, the centerpiece surgery scene is as squirm-making as anything seen on screen this especially gore-soaked year. It not only works due to Todd Masters’ unpleasantly realistic makeup FX, and the fact that a remarkable amount of them got a pass under the R rating, but because another of the characters is on hand as a bound and terrified witness (and audience surrogate). Plus, the villain performing the operation delivers an explanatory monologue not with evil glee, but in a calm, rational tone that almost convinces you that what he’s doing is reasonable.

In addition, Turistas does what any genre film worth its blood should do: provide at least one grace note that hasn’t previously been seen on screen. In this case, the imperiled youths are pursued at length through underwater caves, and there are a few moments where they swim to the tops of these chambers to suck shimmering blobs of precious air from the rocky ceilings. I don’t recall seeing that bit in a movie before; it both possesses an odd beauty and expresses the desperation of the circumstances, and like a lot of Turistas, it’ll have you thinking that a nice safe movie theater is a better place to be this winter than a tropical “paradise.”