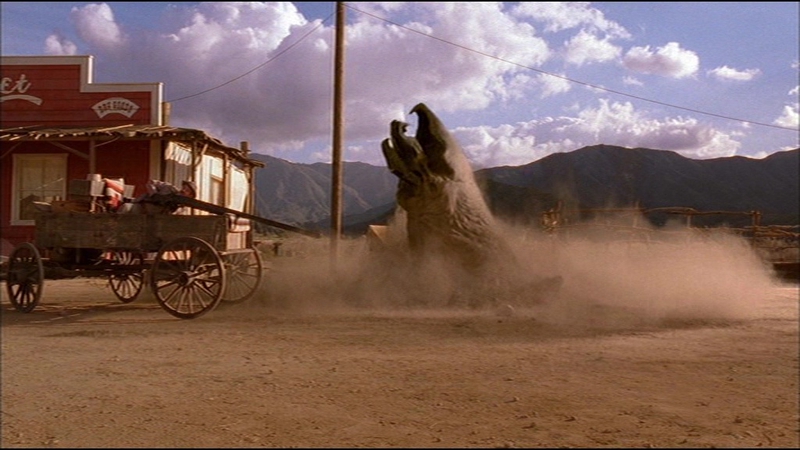 Editor's Note: This was originally published for FANGORIA on January 7, 2004, and we're proud to share it as part of The Gingold Files.

The phrase “run into the ground” has never seemed more appropriate than when applied to Tremors 4: The Legend Begins, which is proof positive that this is one franchise whose ideas have been exhausted. Despite its slick technical veneer, this feature feels like an extended episode of the underachieving Tremors TV series, with cheap-looking (albeit intentionally so) sets, a sparse cast and a paucity of monster scenes. Most crucially, though, the witty imagination of previous entries goes lacking; there’s little invention to the monsters’ behavior, the ways in which the human heroes battle them or the humans themselves.

The setting is the late-19th-century town of Rejection, Nevada—an amusing riff on the Perfection name it will later adopt, though it’s a stretch to accept that any village would take on that name in the first place. Still, it’s rather appropriate given that graboid activity in the local silver mine, the one source of employment and capital, has led to its closing and the exodus of most of its residents. Enter the mine’s owner, Hiram Gummer, played by Michael Gross as the foppish Brit-accented ancestor of his Burt Gummer survivalist character from the other Tremors films. It’s an amusing variation on the gung-ho Burt—for about five minutes, but neither he nor any of the other people go anywhere very surprising, playing out standard-issue characterizations that lack the quirky personalities of Val, Earl, the modern Gummers et al.

There’s little variety to the monsters, either—no new species, just mini- and full-sized graboids that only mount a pair of attacks on our heroes before the climax—in which the survivors scamper all over Rejection’s streets before quieting down to try to attract the creatures into an ambush by banging on a metal triangle. At least it all looks and sounds good; the 1.85:1 transfer on Universal’s DVD brings out the vibrant colors of series veteran Virgil L. Harper’s photography, and the Dolby Digital 5.1 audio makes strong use of the directionals during the infrequent graboid assaults.

Under the circumstances, it’s no surprise to learn (in a “You’re on the Set” featurette) that this entry had its origins not in the creative inspiration of its makers, but in the financial imperative of the studio. More interesting than this standard-issue making-of is a piece on the creation of KNB’s monster FX hosted by Greg Nicotero, and a peek behind the scenes at the miniature work (even though there’s no location sound on the latter, just music). Eleven minutes of deleted scenes reveal nothing that was a great loss—indeed, it leads one to question why more such inconsequential character moments weren’t trimmed from the final movie’s overlong 101-minute running time. The last clip in this section is an interior tent scene set during a sunny day but shot during a heavy storm, with production audio revealing rain noise that at times threatens to drown out the actors’ voices.

Director S.S. Wilson recalls this and assorted other production headaches in an audio commentary, along with the historical research that went into the project and occasional scenes that the Tremors gang wanted to incorporate into previous entries and finally got to use here. It’s an ingratiating enough talk, though one has to wonder why the rest of the team didn’t take part—they might have helped fill in the frequent gaps of silence. The best extra on the disc, in fact, is one that isn’t listed anywhere in the disc’s promotion or packaging: Recorded Live, Wilson’s award-winning USC student film (which this writer recalls enjoying as a between-movies filler on HBO many years back). Presented in rather battered and grainy fullscreen, the short nonetheless remains quite entertaining, and Tremors fans will appreciate the way its “monster” (a mass of recording tape that terrorizes a job applicant) prefigures the tentacle-spewing beasts of Wilson’s subsequent features.