Review: THIS IS THE END 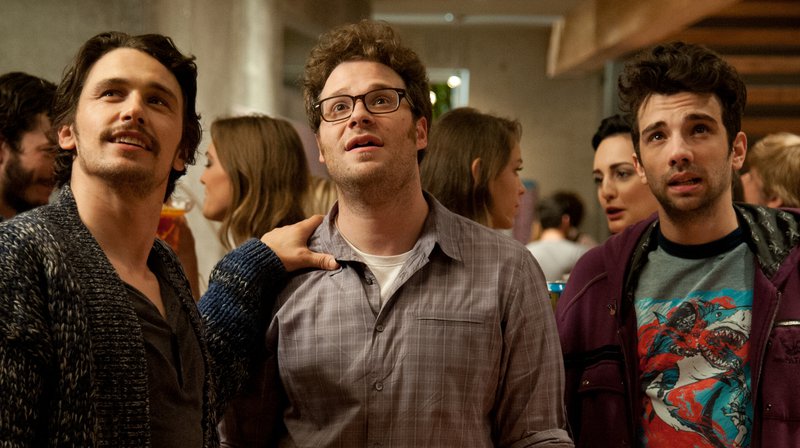 Editor's Note: This was originally published for FANGORIA on June 12, 2013, and we're proud to share it as part of The Gingold Files.

A self-referential bro comedy featuring a bunch of mainstream stars playing themselves may not sound like FANGORIA material, but This Is the End packs in more gore and cooler creatures than many a straight horror film, and more laughs than any outright horror spoof in recent memory. Heck, this movie made me laugh at two things I didn’t think I’d ever find funny again: “Gangnam Style” and an Exorcist parody. Part of the trick is that as farcical as things get, the guys take the supernatural threats seriously, even as they react to their predicament in increasingly outrageous ways.

Seth Rogen stars as Seth Rogen, the appealing, friendly shlub who every so often has to take crap from the public for always playing the same type of role. Jay Baruchel is Jay Baruchel, his old friend from Canada who comes down to LA to visit but feels awkward and out of place amidst the Hollywood scene. After a day of bong-smoking and video-game-playing, the duo wind up at the overstated mansion of James Franco, who’s throwing a major bash and has apparently invited every young star on the scene, including Jonah Hill (with whom Jay apparently has some longstanding, undefined beef), Craig Robinson, Emma Watson and Michael Cera, the latter playing most extravagantly against his real self (one assumes) as a coke-fueled party monster.

Any puritanical type would say the debauchery on view here warrants some sort of divine punishment, and so it is done. Beams of light pierce down from the sky and carry a large percentage of the population into the heavens—but nobody at Franco’s place is lifted up. Instead, the front lawn opens up into a hellish sinkhole that swallows a number of unfortunate celebs, fire rains down and only the abovementioned guys survive to take shelter in the mansion, along with Danny McBride, adopting the boorish a-hole qualities of many of his screen personae. From here, the movie takes on an Animal House-meets-The Mist tack, as the guys are besieged by initially unseen creatures, anyone who ventures outside risks decapitation or worse and time is spent nattering about the religious significance of it all. Unlike the folks in The Mist, though, they don’t have a supermarket’s worth of provisions to sustain themselves, and thus must deal with a dwindling supply of food, water and, perhaps most importantly, marijuana.

This Is the End could have descended quickly into a smug vanity project (a few knocks on the guys’ less successful movies notwithstanding), but Rogen and Evan Goldberg, who directed and scripted based on Jason Stone’s short Seth and Jay Versus the Apocalypse, never forget they’re making a real movie here. Even with a cast playing themselves in a spirit of improvisational looseness, they resist any urge to adopt a mock-doc aesthetic, instead staging, shooting and cutting both comic and occasional horrific moments (a number being both at once) with an assured sense of craft and timing. Brandon Trost’s cinematography lends the proper fiery/apocalyptic sheen, and the demons and other FX—special makeup by Greg Nicotero and Howard Berger, CGI by Paul Linden and Modus FX—are graphic and overstated enough to make their outrageous points without breaking the fourth wall…figuratively, anyway.

In the midst of the bloody deaths and hellish beasts that get their horn on in more than one way, the actors gamely allow themselves to be the butt of many self-referential jokes, while also enacting personal minidramas that may or may not reflect real-life concerns and tensions. The themes of male bonding/insecurity/jealousy at the heart of many of their previous films find perhaps their most explicit expression here, under the pressure of the literal hothouse situation. (In the midst of this enforced boys’ club, no one seems concerned about any offscreen love interests, and the brief presence of Watson, the only female with more than a line or two, just occasions an extremely inappropriate conversation about what might happen to her in a houseful of dudes.) Even more explicit, not surprisingly, is the language, with f-bombs and anatomical discussions galore, which has become tiresome in other movies where it represents the sum total of the humor, but here comes off like the natural and often funny reaction of a bunch of guys who’ve made their livings in R-rated raunch when confronted with a true life-or-death scenario.

Even given all the transgression, gross-outs and bad behavior, This Is the End eschews a mean-spirited tone and is carried by the likability of its ensemble, who are clearly having a good time and let the audience in on the fun. Right up until the ending (which includes a hilarious cameo by a past associate who had heretofore been conspicuous by his absence), Rogen, Goldberg and their compatriots demonstrate that the road to comic hell can be made most amusing with the right intentions.