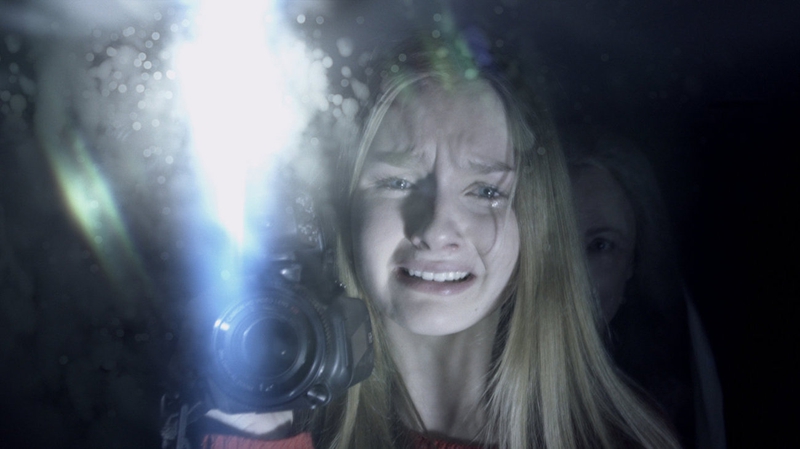 Editor's Note: This was originally published for FANGORIA on September 10, 2015, and we're proud to share it as part of The Gingold Files.

I’m still not sure exactly how much of M. Night Shyamalan’s The Visit is supposed to be funny, but I can say that whether intentional or not, the humor is a tonic after the self-seriousness of his last few films.

There’s a lot in The Visit that’s just as goofy as Shyamalan’s Lady in the Water and The Happening, though the writer/director, at least sometimes, appears to be in on his own joke here. Rather than address Important Themes or the end of the world as we know it, The Visit is a scaled-down chiller in the found-footage form that encourages a looser approach to the material. On the other hand, it’s slicker and more composed than many handheld horrors, and that’s because the camera-within-the-film is largely wielded by Becca (Olivia DeJonge), a 15-year-old girl who fancies herself a documentarian and talks un-self-consciously about things like “mise en scène.”

Becca’s goals as a filmmaker are more seriously intended than Shyamalan’s, as her latest project is a therapeutic as well as creative venture, helping her to deal with rifts in her family. To wit, her dad is long gone and in the opening minutes, she and her younger brother, wannabe rapper Tyler (Ed Oxenbould), are headed out to visit their grandparents, who have long been estranged from their mother (Kathryn Hahn), who herself is eschewing the trip to embark on a cruise with her latest boyfriend. The old folks, who live in a rustic home in the wilds of Pennsylvania (Shyamalan’s traditional turf), are named Doris (Deanna Dunagan) and John (Peter McRobbie), though Becca and Tyler, for all their pretense at sophistication, still call them Nana and Pop Pop.

At first, the kids’ week in the countryside indeed seems like an old-fashioned childhood sojourn, with Nana and Pop Pop playing willing subjects for Becca’s camera. Then they start acting, shall we say, eccentric, in ways that are amusing (Nana has a rear-end wardrobe malfunction), gross (an unpleasant discovery in the backyard shed) and truly freaky during a hide-and-seek game that’s The Visit’s best sustained scary setpiece. Because it’s fairly clear early on that there’s something seriously not right with Nana and Pop Pop, The Visit doesn’t build the slow-burn suspense of Shyamalan’s classic Sixth Sense and its worthy follow-ups Unbreakable and Signs. Instead, it’s a first-hand trip into the funhouse spook ride that the oldsters’ house becomes, in which the grandparents become the creatures scurrying in the dark and popping out for sudden jolts.

If the generalities of the form are familiar by now, Shyamalan puts a transgressive spin on them by making old folks the agents of evil, terrorizing the kids they should be caring for. At the same time, presenting the elderly as evil can’t help but play as black-comic, in scenes like a demented game of Yahtzee. There are moments when the menace seems played straight but elicits morbid chuckles instead, and sometimes it’s hard to tell whether or not that was Shyamalan’s intent. The writer/director adds more than a touch of fairy tale to the proceedings as well; in particular, the story of Hansel and Gretel is echoed in the much-advertised scene where Nana asks Becca to climb into her oversized oven to clean it. It’s a neat gag, though Shyamalan pulls it not once but twice, and Becca going along with it a second time, after things have clearly gone around the bend, seems implausible. In general, the siblings take quite a while to realize the danger they’re in—though for all the humorous overtones, Shyamalan successfully maintains a sense that Becca and Tyler may not make it to the end of their vacation alive.

The Visit benefits from the performances by Dunagan and McRobbie, who completely embrace their off-kilter roles, while DeJonge and Oxenbould do well with young characters whose words sometimes sound too scripted. Their sisterly-brotherly bond in the midst of the perversion of family dynamics does convince, and it leads up to a good why-didn’t-I-figure-that-out? twist in the final act. It’s just a shame that Shyamalan wraps everything up with an awkward and unfunny scene alongside the end credits that, according to a title card, he included at the insistence of his brother. That’s one act of sibling devotion Shyamalan should have resisted.