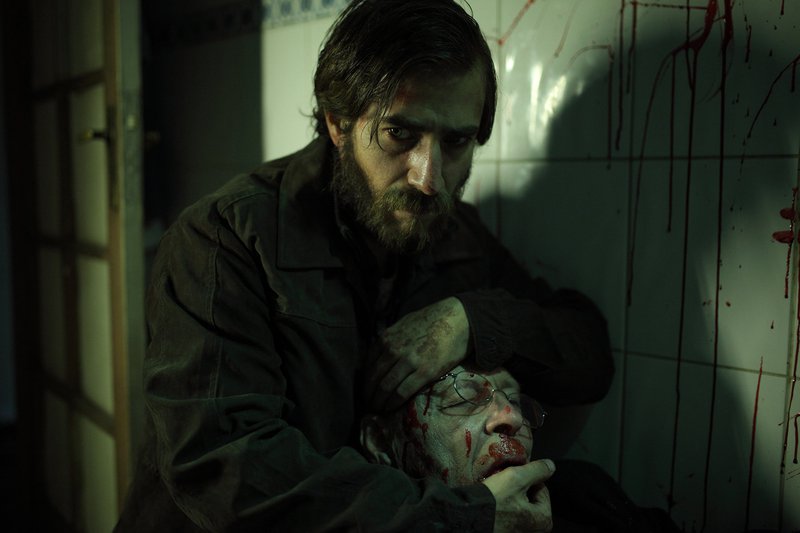 Editor's Note: This was originally published for FANGORIA on June 12, 2015, and we're proud to share it as part of The Gingold Files.

It’s almost a misnomer to refer to Guillermo Amoedo’s The Stranger as a vampire film—not just because the v-word is never spoken, but also because it’s less about the consumption of blood and more about the transference of it.

The Stranger is concerned with the horrific effects of infection, though its central figure is far removed from the raving, running creatures of 28 Days Later’s bloodline. Martin (Cristobal Tapia Montt) is a taciturn loner who is first seen showing up on the doorstep of Monica (Alessandra Guerzoni) and her teenage son Peter (Nicolás Durán), seeking a lost love named Ana. Ana’s not there, but Peter knows where she is; cut to exterior: cemetery - night and a shot of her grave marker, a great, simple starting point for a horror story.

Despite the implicit suggestion of what’s to come, Ana does not get resurrected other than in flashbacks/Martin’s memories of her, and he quickly has more pressing concerns. He is confronted by a trio of young toughs led by the sadistic Caleb (Ariel Levy), beaten and left for dead, a crime whose coverup is enabled by Caleb’s nasty cop father, Lt. De Luca (Luis Gnecco). Peter is able to get Martin back to his house, where Martin implores him and Monica not to touch his blood, but it’s not long before Caleb, who knows that Peter knows what he’s done, is taking violently direct steps to deal with the witness.

While the description of that setup might suggest a brutal, visceral thriller, and Amoedo’s screenwriting credits include collaborations (such as The Green Inferno and Aftershock) with Eli Roth, who’s a producer here, The Stranger is more oriented toward the downbeat than beatdowns, or exaggerated gross-outs. Even as there’s plenty of red shed along the way, Amoedo pitches the whole thing with a somber tone, emphasizing the emotional toll on the characters over the physical one. Everyone on view suffers in one way or another, and the bad guys as well as the good folks are allowed their human moments, as all are motivated by concern for their loved ones. This approach results in a little more resonance than one often finds in similar sanguinary sagas, attuning us toward the people rather than their violent acts. As such, it does take a little getting used to that although Martin is the story’s protagonist, he is far from an active one, spending most of the film attempting to avoid conflict rather than engaging in it.

Another stumbling block is the dialogue delivery. The Stranger is a product of the Chilewood movement spearheaded by Roth and his producing partner Nicolás López, though unlike the two aforementioned films, it’s not about outsiders getting into trouble when they venture into South America. This time, the setting is an unnamed North American suburb, yet while all the performances are heartfelt, it’s evident that they’re largely speaking English as a second language, and at least a couple of characters appear dubbed by others—including Lt. De Luca, whose voice will put Eurogenre fans in mind of those heard coming from mob bosses in poliziotteschi flicks. Clearly it was a commercial concern to not set the movie on its home turf, but one gets the feeling the performances would have been stronger had they been delivered in the native tongue.

There’s also a sense that making the setting something it’s not prevents Amoedo from taking full advantage of the local color and lore; a shot of multiple crosses atop graveyard tombstones aside, the film sometimes seems to be edging toward religious themes it never quite gets to. Which is not to say The Stranger lacks for atmosphere; Chechu Graf’s cinematography delivers the appropriate mood, with the largely nighttime shooting complementing the emotional darkness shrouding these people’s lives. And even given the aforementioned distractions, it’s The Stranger’s emphasis on their inner turmoil as opposed to their outer wounds that gives it a bit of distinction in its field.