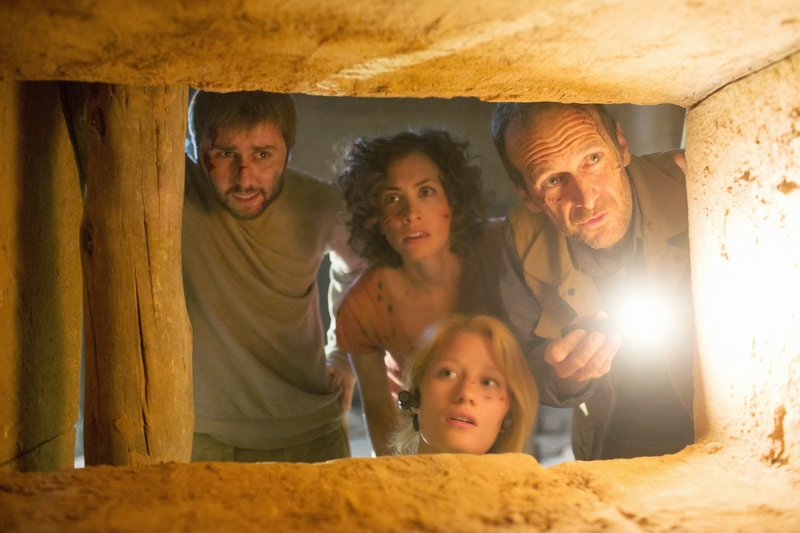 Editor's Note: This was originally published for FANGORIA on December 5, 2014 and we're proud to share it as part of The Gingold Files.

Alexandre Aja and his cohorts have done pretty well by remakes like The Hills Have Eyes, Maniac and Piranha 3D, but they hit one into the sand trap with The Pyramid, which is ostensibly an original but plays like a redux of the many previous films in which exploratory teams enter a forbidding structure/location and live (or not) to regret it.

The directorial debut of Aja’s regular co-scripter Grégory Levasseur, working from a script by Daniel Meersand and Nick Simon, The Pyramid is also yet another found-footage doomed-expedition opus, though the approach isn’t always consistent. A few of the characters have cameras, but the shots don’t always appear to be coming from the vantage point of any of them. Also sporting a camera is “Shorty,” a robot rover that looks remarkably like a miniaturized version of Short Circuit’s Number Five, and whose point of view is inevitably introduced peeking at cute blonde Nora (Ashley Hinshaw) while she’s getting dressed.

Nora and her father Miles Holden (Denis O’Hare), both archaeologists, are part of a group that also includes technician (and Nora’s BF) Zahir (Amir K), documentary filmmaker Sunni (Christa Nicola) and cameraman Fitzie (James Buckley), who are on the site of a newly discovered pyramid in the desert outside Cairo. This one has only three sides, as opposed to the famous Pyramids of Giza, and the quintet are anxious to explore it, though there’s the usual conflict between the traditional and modern methods of investigation—or as Dr. Holden, who has a thing for alliteration and rhyme schemes, puts it, “Archaeology used to be about digs and dirt, but we lost the raw sensation with this technological mediation.” Political upheaval in Cairo has their overseers ordering them to pull out of the area, but Nora objects in the manner of so many before her: “This is the find of the century. We can’t give up when we are this close!”

So down they go into the depths of the pyramid, where they encounter the time-honored hieroglyphic equivalent of a “Do Not Disturb” sign. “This says slaughter,” “This says god,” “This says underworld,” they say as they translate a few of the pictograms, but they’re not about to take the hint and turn back. Cue the loss of the lifeline that could help them find their way out, the cave-in that traps them and the booby traps suggesting that these ancient Egyptians inspired the Hovitos seen at the beginning of Raiders of the Lost Ark. There are creatures, too, which elicit a few shudders while lingering in the darkness before coming into the dim light (or night-vision point of view) via less shiver-inducing CGI.

Throughout, the generic characters never seem to be responding to their predicament with the appropriate level of fear, panic or, sometimes, common sense. Even when Levasseur sets up a cruelly effective setpiece involving one character impaled on a spiked floor, the moment goes eye-rolling when another of the group raises that person’s head and asks, “Is that better?” The immediacy of the handheld shooting (which, thanks to DP Laurent Tangy, is at least cleaner and steadier than the norm) can only go so far to involve you in their plight, which has both them and the plotline running around in circles through tombs, chambers and corridors with little visual variety, often stopping to deliver expository or deductive dialogue when they really should be devoting more time to finding a way out.

Once in a while, The Pyramid seems to be intentionally shouting out to movies of the past, as when climactic digital creature FX appear to have been done with a slight intentional jitter to give them the feel of Ray Harryhausen’s classic stop-motion critters. There are too few of these moments, though, and the above use of the words “inevitably,” “usual,” “so many before,” “time-honored,” and “generic” should give you the idea of the basic problem here. The end-credits revelation that one of the visual FX companies involved is called Cliché simply serves as a period at the end of this 89-minute sentence.